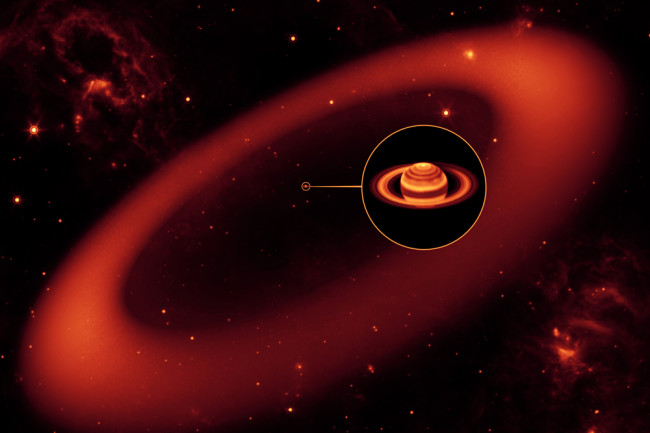 An artist's illustration shows the grand scale of the Phoebe ring. (Credit: NASA/JPL-Caltech/Keck) Think you know what Saturn looks like? Think again: the planet's outermost ring is the biggest planetary ring known to mankind, but because its black color blends in with the blackness of space, images of the planet fail to capture it. Now, scientists examining the ring in the infrared spectrum say it's even bigger than they thought — by nearly one-third. 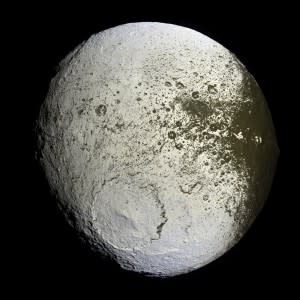 Cassini captured this false-color image of Iapetus. (Credit: NASA) In 2009, Astrophysicist Douglas Hamilton and his team discovered the so-called Phoebe ring using infrared imagery from the Spitzer Space Telescope, and it was literally a big discovery. If Saturn’s famous rings were toe rings, the Phoebe ring would be a monster truck tire, for a simple comparison. Although no one actually saw the Phoebe ring before 2009, it certainly made its presence known to astronomers on the surface of Saturn’s moon Iapetus, which looks like no other moon in the solar system. The surface of icy Iapetus is white on one side but black on the other. Scientists have long suspected that Iapetus became a two-faced moon because it’s pushing through a ring of dark particles that we can’t see. Like Earth’s moon, Iapetus shows the same face to its home planet at all times, so one side of Iapetus is constantly getting smacked with particles in its path — just like a car bumper that’s littered with bug splats after a long road trip. When in 2009 Phoebe was revealed, it was really only a cross-section view. As Hamilton told Wired, the original picture felt “not much bigger than a postage stamp.”

In the most recent study, the same team used a different infrared telescope to get a complete view of the Phoebe ring, and it’s 30 percent larger than expected. The Phoebe ring, we now know, is more than 200 times as big across as Saturn. So how big is that? If you looked into the night sky from Earth, the Phoebe ring — if it were visible — would appear to be as wide as two of our Moons. 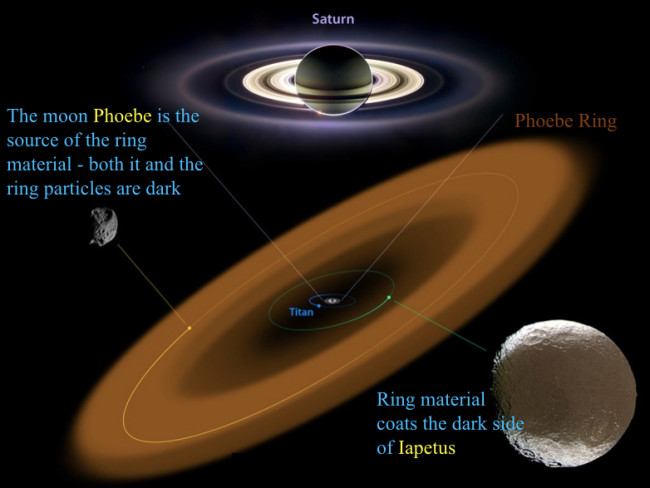 (Credit: NASA/JPL/Space Science Institute) Apart from gauging its size, Hamilton’s team also got a better idea of what the Phoebe ring is made of. Though it's a giant, the ring itself is gossamer, comprised of small particles and dust grains that are incredibly far apart from each other. If you were to fly through the ring in a spaceship, there’d be perhaps 20 particles in an area of space about the size of a mountain, according to NPR. The researchers published their findings Wednesday in Nature.

The Phoebe ring, as its name suggests, may owe its existence to dust flaking off Saturn’s moon Phoebe. However, it’s also possible that smaller, undetected moons are also serving as feeders to the Phoebe ring — Saturn does have 62 moons that we know of. Now that we know more about Saturn’s invisible ring, Hamilton said it raises the question of whether other planets in our solar system may also have secret rings to reveal.