Saturn Gets Drenched by Its Eroding Rings 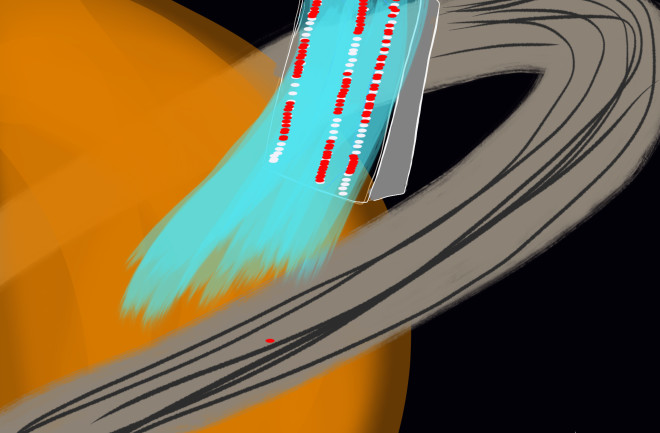 Ethereal, stately Saturn, it turns out, deals with a problem we Earthlings are quite familiar with this time of year: rain. The planet gets an Olympic-pool sized quantity of water dumped on her each day.

Studying satellite images taken at the Keck Observatory in Hawaii, James O’Donoghue, a postgraduate researcher at the University of Leicester, and his colleagues noticed several mysterious dark bands on the surface of Saturn. They found that the bands correlate directly to magnetic lines that link the planet with her densest, wateriest, and most brilliant, rings, and shared these cosmic findings in a letter to Nature last week. The drizzle coming from her rings effectively douses the glowing hydrogen molecules we see on Saturn's surface.

Saturn is famous, among humans, for her very photographic rings. But their origins, and evolution, have remained a mystery. How exactly were the rings formed to begin with? Are the rings we see today remnants of a previously more massive ring system? These recent observations  indicate than an electromagnetic erosion force pulls charged water molecules from the rings and deposits them in Saturn’s upper atmosphere, called an ionosphere. Perhaps this process is playing a part in shaping the rings over time.

The rings, which look like marvelous elliptical beams of light as seen in satellite images, are actually bands of collisional, self-gravitating water-ice sludge rocks, some of which are submicrometer-sized, and others the size of mini-moonlets a few kilometers across. All these watery ice objects behave like a dense gas together, orbiting Saturn in a thin disk.

Saturn behaves like a big magnet, with magnetic field lines that link her rings to her body. Remember that iron-filing experiment in school? It’s like that.  The ionosphere of Saturn’s rings is “seen” by the magnet that is Saturn, says  O’Donoghue, “and effectively bounces back and forth from ring-to-planet. Some of these bouncing water particles go too far and never come back.”

There’s not much danger of the moonlets in the rings going anywhere, but the small particles in the orbiting disks behave differently when they acquire a significant electrical charge. When the sun charges the water molecules, they become vulnerable to getting swept down towards the planet’s upper atmosphere along the magnetic field lines.

The researchers estimate that about 30-40% of Saturn's upper atmosphere is flooded regularly, the equivalent of between 1 and 10 Olympic-sized swimming pools a day. It may be, then, that these magnetic field lines are responsible for shaping the spacing and composition of the rings.

Thanks to James O'Donoghue for kindly answering my questions and consulting on images.

A fun video about how Earth's magnetic field interacts with the Sun's to create aurorae: