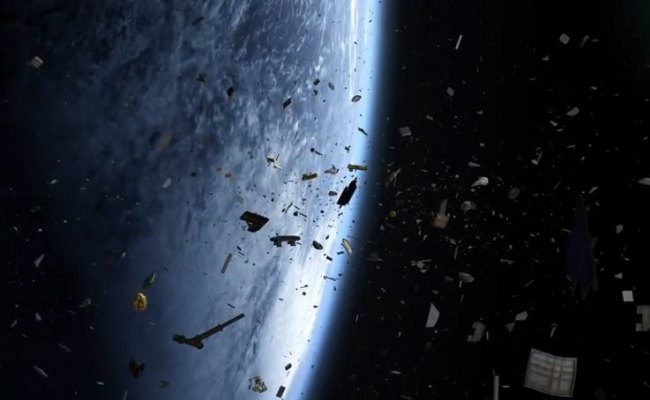 Space may look vast, but it’s actually pretty crowded near Earth. As of a couple of years ago, more than 1,300 active satellites orbited Earth, in addition to tens of thousands of dead satellites, discarded rockets and other bits and pieces that have accumulated in space in the 60 years since Sputnik, ranging in size from softballs to school buses. When we turn on a new radar in a few years that can see even smaller pieces, we are going to see millions of them. And it's going to continue to get even more crowded, because here come the CubeSats! These lunchbox-sized satellites are inexpensive to build and launch—and they are extremely useful for scientific experiments, communications and even national security. Consequently, a lot of them occupy low Earth orbit, the region of space within about 1,200 miles of Earth. India released over a hundred CubeSats in a single launch in February, Russia launched 72 in one shot in July, and that’s just the start. And CubeSats aren’t the only things filling up LEO. Several companies are planning constellations of hundreds or thousands of satellites to provide internet service worldwide. There’s a lot of stuff whizzing around out there. This can be a problem. In the movie Gravity, space junk almost killed Sandra Bullock. And while Gravity was fiction, the danger of space junk is not just fodder for futuristic action movies. 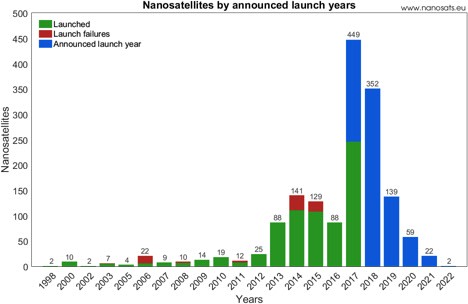 Scientists who study space have long worried about the Kessler effect—or the fear that objects in low Earth orbit (LEO) are so plentiful that any collision could create a runaway chain reaction. One collision would mean more space junk, which would collide with other objects and create even more space junk, ad infinitum. When you consider how heavily we rely on satellite-based technologies—communications, GPS, weather forecasting—it’s easy to see how collisions in space could quickly become catastrophic. Somebody has to watch where everything is going.

So how do we keep track all of these satellites? Currently, that’s the job of the U.S. Space Surveillance Network, but they can’t tell which satellite is which just by looking at it. That makes it hard to predict where they’re going, and whom to alert if they need one satellite to dodge out of the way of another. At Los Alamos National Laboratory, we’re hoping to change that. As a national security laboratory, our mission is to find scientific solutions to some of the world’s most complex problems—that includes keeping our satellites and spacecraft safe. So we’re developing an optical “license plate” that we hope will one day travel aboard every object that goes into outer space—whether it’s a CubeSat, a multi-million-dollar satellite or a manned spacecraft—allowing observers on the ground to know exactly what kind of satellite it is, what company or country owns it and what orbital path it follows.

Called an Extremely Low Resource Optical Identifier—or ELROI—these license plates will emit a unique pattern of blinks. All you have to do is watch the pattern and look it up in a registration database to identify the satellite. Problem solved. But how can you see even a laser pointer on a satellite hundreds of miles away from the ground?

A Whole Bag of Tricks

First, you point a small, relatively inexpensive telescope at the satellite. Second, the light comes from a laser, so it is a precise color of red (638 nanometers wavelength, the same color as most red laser pointers). A filter in the telescope blocks everything but that color, so you don’t have worry about the glare from sunlight bouncing off the spacecraft. Third, you use a very sensitive camera. Ours will see about five photons, or particles of light, per second. (For comparison: when you look at the faintest star you can see on a very dark night, you are seeing a few thousand photons per second.) Finally, the blinking is precisely timed. When you see a blink, you know exactly when the next one will happen, and you can ignore all the light that comes in the meantime. Then the magic of digital processing comes in. ELROI is blinking a binary serial number, about a hundred blinks (1’s) or non-blinks (0’s) in a row, repeating the whole pattern several times per second. We use our telescope to watch as the satellite passes over our heads, going from horizon to horizon in a few minutes. We collect our 5 photons per second and stack them together to assemble the serial number. When you read so few photons, you won’t be absolutely certain of whether each bit is a one or a zero. But these serial numbers are designed with error-correcting codes, so even if you get only 90 percent of the bits right, you can still match it to a particular satellite (like a detective with only the first three letters of a license plate that she knows is on a Ford Fiesta). 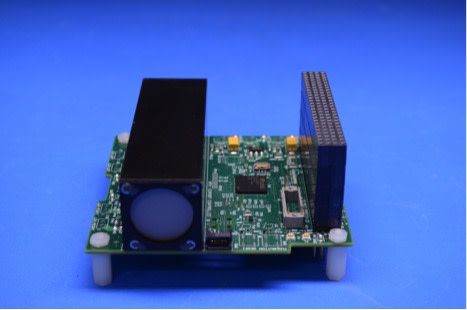 What it looks like now. This four-inch-square board is a satellite license plate that will travel on the New Mexico Tech CubeSat launching early in 2018.

This summer we delivered our first flight unit to New Mexico Tech, which installed it in a CubeSat that will launch in early 2018. Currently the ELROI is a circuit board about four inches square and an inch thick, but we expect to soon shrink that down to the size of a postage stamp. Another goal is to make the technology cheap enough (under $1,000) that a high-school class sending a CubeSat into LEO could afford it. (For satellites that go into geosynchronous orbit—more than 22,000 miles above Earth—the cost will be higher because a brighter light and bigger solar panel will be required.) 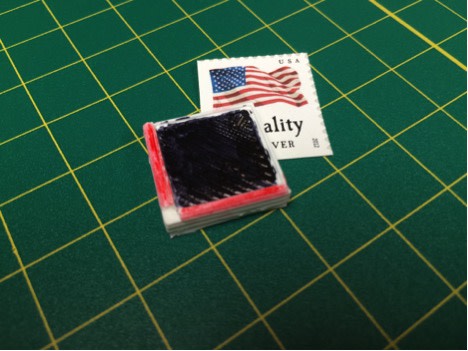 What we want it to look like. Glue it down to anything you want to send into space, and sunlight on the solar panel will start it blinking. Once we meet these goals, we expect ELROI to become a useful tool in both identifying objects in space and, ultimately, reducing the amount of clutter. Because, in the not-too-distant future, the abundance of litter in space is going to require that we bring objects back down to Earth. Already scientists and engineers are working to develop robots and other technologies that could grab defunct satellites from orbit. However, our treaties require that you know exactly what you’re grabbing. You can’t just go into space and say, “This is junk,” and drag it down. You have to know exactly what it is and who it belongs to, and then get permission. ELROI will make that possible. Space will only become more important as nations and corporations try to gain advantage over their adversaries and competitors. But we can no longer regard space as an infinite domain. Our hope is that, by developing this optical license plate, we can grow our presence in space while simultaneously making it a little less crowded. David Palmer is an astrophysicist and the principal investigator of the Extremely Low Resource Optical Identifier (ELROI) in the Space and Remote Sensing group at Los Alamos National Laboratory.