With an artist’s eye and a scientist’s mind, anatomist Santiago Ramón y Cajal was the first to see—and illustrate—what neurons really do. His exquisitely detailed drawings changed our understanding of the brain and nervous system. 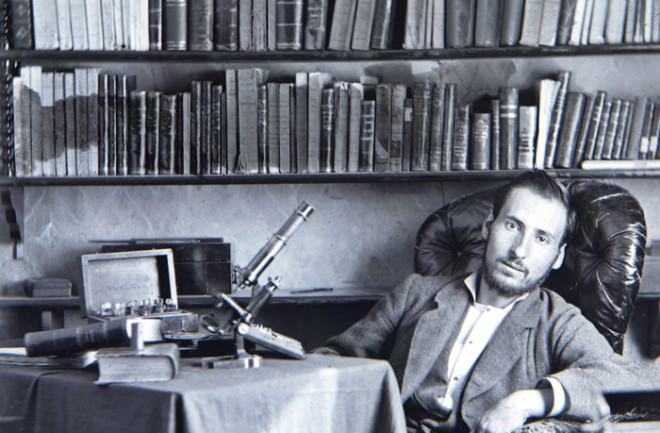 Spanish anatomist Santiago Ramón y Cajal began to study histology because it was cheap. Cajal was a man of poor health and modest means and examining stained specimens required little more than a microscope and patience. The fact that he had no access to the fancy tools of bacteriologists, the scientific rock stars of their time, turned him toward the study of animal tissues and cells. These “captivating scenes in the life of the infinitely small,” as he called them in his autobiography, Recollections of My Life, went on to inspire ideas that overturned how scientists understood the brain and the nerves.

Cajal was born in 1852. As a young man he taught himself to paint and draw but turned to medicine for a career. In his thirties, he learned about a new way to stain tissue developed by the Italian Camillo Golgi, and he used this technique to see and draw nerve cells, some with long, sinuous axons; others fat, with bushy dendrites. His obsessive interest, artistic skill, and evolving understanding of the architecture of the nervous system found expression in beautiful portraits of brain cells and diagrams of nerve fibers. “Realizing that I had discovered a rich field, I proceeded to take advantage of it, dedicating myself to work, no longer merely with earnestness but with fury,” he wrote in Recollections. “In proportion as new facts appeared in my preparations, ideas boiled up and jostled each other in my mind.”

In Cajal’s time, the dominant belief was that the brain and nervous system formed a “reticulum,” a web of fibers that conducted nerve signals continuously, through a network of connections that linked it all together. It is certainly a simpler and more plausible idea than the truth that Cajal saw in his microscope: that the brain is stuffed with billions of tiny cells of many different sizes and shapes. Each nerve impulse—each twitch, each thought—travels through the brain by leaping from cell to cell. For that insight, he was awarded the Nobel Prize in 1906, shared with Golgi. Cajal also figured out that nerve cells are polar, meaning that signals enter the cell through the shrubbery of the dendrites at one end and leave through the other end at the whiplike axon.

More than a century later, we have machines that can visualize living structures smaller than the wavelength of light. Yet today’s students of neuroscience recognize Cajal’s artful and elaborately detailed illustrations of neurons. He is often called one of the fathers of neuroscience but is probably better described as one of its true artists. Thanks to his vision, we all see a new truth.

Cajal's drawings of neurons captured the spidery outgrowths called dendritic spines, the sites where each neuron talks to its neighbors.

Those observations are verified by modern visualizations of dendritic spines, created by converting electron microscopy images into 3-D renderings.