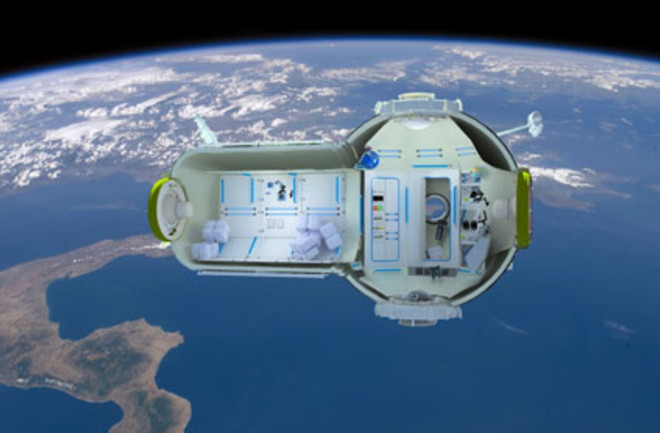 The station will be able to host up to seven passengers in its homey capsule, free of extraneous scientific instruments and pesky astronauts and cosmonauts. It will be built by RSC Energia

, the same company that builds the Soyuz passenger capsules and the Progress cargo ships used by the Russian space agency. It will follow the same orbit as the International Space Station, and will be able to dock with shuttles from around the world.

The CSS will be serviced by the Russian Soyuz and Progress spacecraft, as well other transportation systems available from other countries, enabled by a unified docking system that will allow any commercial crew and cargo capability developed in the Unites States, Europe and China. [Press Release]

The developers say this orbital nest will host space tourists, scientists from other countries and private industry who want to perform experiments in space, and overflow from the International Space Station during maintenance or emergencies. There's no word yet on how much a single room at the orbital hotel would cost, but it's a safe bet that every room would have a stellar view.

Orbital Technologies said they already have several customers under contract from different segments of industry and the scientific community, representing such areas as medical research and protein crystallization, materials processing, and the geographic imaging and remote sensing industry. “We also have proposals for the implementation of media projects,” said Kostenko. “And, of course, some parties are interested in short duration stays on the station for enjoyment.” [Press Release]

Before the Orbital Technologies announcement, an American company, Bigelow Aerospace

, was the only name in the space hotel game. That company, which is owned by the founder of the Budget Suites of America hotel chain, claims to have already launched a "fully operational" prototype and says it's working on additional, larger designs. Orbital Technologies seems to be hot on Bigelow's tail--company executives claim to have already secured funding for the CSS project.

Kostenko said that the project has "found Russian and American investors, and we are talking about hundreds of millions of dollars", without elaborating. "At the moment, the project is already at the design stage," he said. [AFP]

Bad Astronomy: Video of the Space Station zipping across the Sun