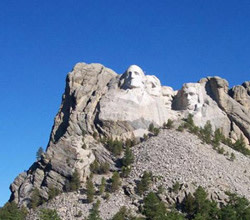 You've almost certainly seen pictures of Mount Rushmore; it's a magnificent carving of the heads of four past US presidents, each almost 20 meters high. Located in South Dakota, it's in a national park and a big tourist attraction (and the scene of the finale of "North by Northwest"). But did you know it's evidence that man was intelligently designed? Well, it's certainly used that way by creationists proponents of Intelligent Design; no less a leading light of ID than William Dembski has used Mt. Rushmore as an example:

Intelligent design begins with a seemingly innocuous question: Can objects, even if nothing is known about how they arose, exhibit features that reliably signal the action of an intelligent cause? To see what’s at stake, consider Mount Rushmore. The evidence for Mount Rushmore’s design is direct—eyewitnesses saw the sculptor Gutzon Borglum spend the better part of his life designing and building this structure. But what if there were no direct evidence for Mount Rushmore’s design? What if humans went extinct and aliens, visiting the earth, discovered Mount Rushmore in substantially the same condition as it is now?

Well, I guess it depends if the aliens see vertically or horizontally, because look what happens if you turn the picture sideways: 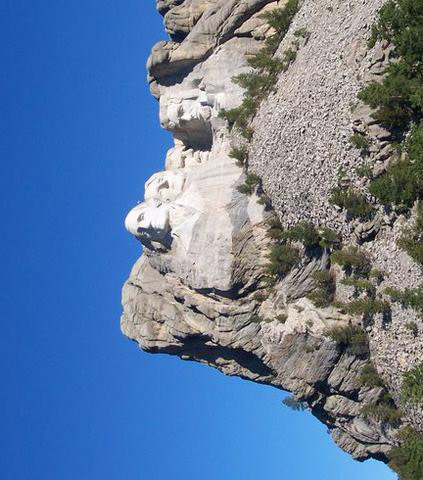 Aha! Obviously, there's no way that this fifth face could have arisen naturally. After all, "eyewitnesses saw the sculptor... designing and building this structure"! Sorry, all my fellow scientists, skeptics, critical thinkers, and reality-based compadres. Dembski clearly has rock solid proof. Tip o' the jackhammer to Tucker Phelps.

Related posts: - The Discovery Institute has no shame - Louisiana: even more doomed - Intelligent Designers nonsense: part n - Irony thy name is ID - Astrology and ID sitting in a tree, K-I-S-S-I-N-G