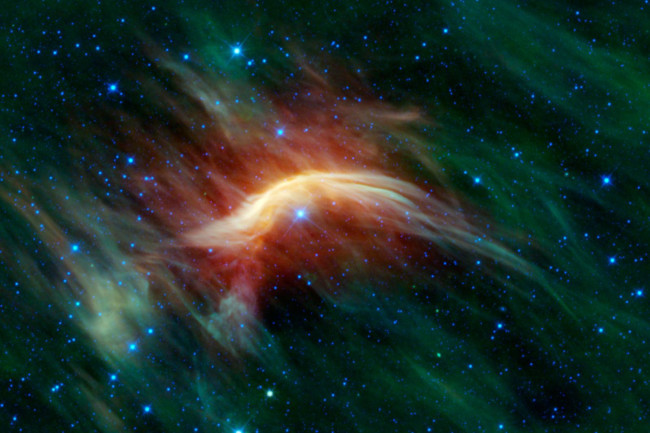 Zeta Ophiuchi, seen as a blue dot at the center of this infrared image, is a fast-moving star some 366 light-years away that pushes a stellar bow-wave of superheated gas in front of it. Red corresponds to hotter, and green to cooler temperatures. (Credit: NASA/JPL-Caltech/UCLA) Stars can run, but they can't hide. Data from NASA’s WISE and Spitzer telescopes shows that fast-moving, runaway stars push a massive cloud of superheated gas in front of them as they plough through space, creating a brilliant arc that betrays their position. The findings were presented this week at the 227^th meeting of the American Astronomical Society, in Kissimmee, Florida. Scientists hope to use these “bow waves” to locate and study fleeing stars throughout the galaxy.

All stars release clouds of solar material — charged photons, electrons and alpha particles — that are shot out by powerful magnetic fields within the star. These particles, or solar winds, are the source of the spectacular Northern and Southern Lights on earth. The more massive the star, the more solar material it emits. And when a star is moving quickly, it pushes the cloud of gas in front of it like a ship carving through water. The movement heats up the collected material and causes it to emit infrared radiation, creating the vivid reds and yellows that pop out in the false-color picture above. In the new study, researchers searched for these glowing clouds, and then probed their interiors to find the stars that created them. Stars Give Their Positions Away Researchers are using these distinctive bow waves to discover fast-moving stars in our galaxy. Using WISE’s infrared camera, they are scanning the sky one degree at a time, and they've already discovered over 200 possible candidates. Most of the stars they observed are much larger than our sun — one of the brightest runaways, Zeta Opiuchi, is 20 times more massive and 65,000 times brighter than the sun. Zeta Opiuchi is blanketed by a dense cloud of solar material, and produces one of the most stunning bow waves yet found. Zeta Opiuchi is located roughly 366 light years away and is moving at a speed of 54,000 mph relative to Earth. It likely received an acceleration boost from the explosion of its companion star millions of years ago. Researchers say most runaway stars were either former binary stars, like Zeta Ophiuchi, that shot out when their partner went supernova, or were ejected from dense clusters of stars by gravitational forces. 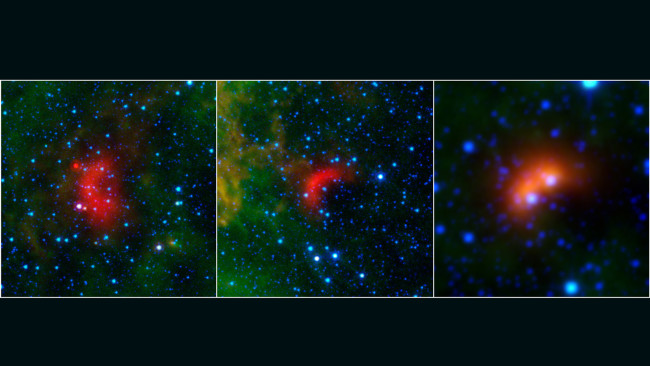 Images from NASA's WISE and Spitzer telescopes reveal several examples of bow waves in front of runaway stars. Image credit: NASA/JPL-Caltech/University of Wyoming Researchers with the WIRO Observatory in Wyoming are studying the stars found by WISE in more detail, and have also discovered that stars not previously thought to be runaways are indeed careening through the galaxy at tremendous speed. "We took a look at our arc-shaped objects and tried to find stars present in the center of each image," said William Chick, a PhD student at the University of Wyoming, during an interview with the BBC. "We were surprised to discover that over 95 percent of these stars were in fact hot massive stars, as we'd predicted."