Rumbling ‘Marsquakes’ on the Red Planet are Mystifying and Exciting Scientists 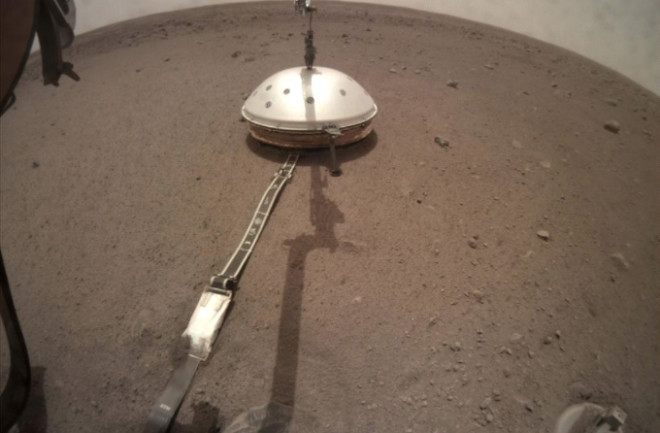 NASA’s InSight lander has its seismic instrument tucked under a shield to protect it from wind and extreme temperatures. (Credit: NASA/JPL-Caltech)

NASA’s Mars InSight spacecraft landed on the Red Planet in November 2018. Scientists equipped the mission with a seismometer so they could learn how Mars releases seismic energy — that is, to get a feel for how the Red Planet rumbles. So far, InSight has recorded more than 100 seismic signals, and researchers are confident at least 21 of those are real marsquakes. But these quakes aren’t exactly what they expected to hear, and the findings have sparked intense curiosity about what lies beneath the dusty surface of Mars.

InSight caught its first likely marsquake on April 6. The tiny quake, which occurred during a lull between a gust of wind and NASA moving the lander’s robotic arm, looked a bit like quakes recorded on the Moon in terms of duration and size. But the signal was too small to reveal information about the planet’s deep interior. The way Mars vibrates can tell researchers a lot about what the planet’s interior is made of and how it’s structured. Prior to InSight, planetary scientists expected rumbling on Mars to look like the earthquakes and moonquakes we see in our home system. But it turns out that’s not the case. “The signatures, the shape of the signals, is not really anything that we’re familiar with from either the Earth or the Moon,” says InSight Principal Investigator Bruce Banerdt.

NASA recently released audio from two such events. The sound of these quakes indicate that Mars’ structure may look like a combination of Earth and the Moon. So far, Mars seems to “ring” longer during a quake, more like the Moon, as opposed to Earth, where quakes appear and disappear much more quickly.

InSight’s initial mission will last one Mars year, or about two Earth years. During that time, it will collect plenty of quakes. “We’re seeing sort of an average of a couple, maybe a couple events of some sort per week, lately,” says Banerdt. Not all of them will turn out to be real marsquakes, but some are.

The seismometer has seen about the number of small events — magnitude 3.5 and below on the Richter scale —that scientists were prepared to detect. But there are few events above that magnitude, which is not what they expected.

But that expectation, Banerdt says, is based on what’s been observed on Earth and the Moon. “We don’t know yet whether [the lack of bigger events is] just the statistics, or whether it just means that Mars has a little bit different distribution of the way that it releases its seismic energy than the Earth and the Moon,” he says.

Only time — and more marsquakes — will tell. And whether Mars turns out to act like we thought, or to defy expectations, the InSight team is excited. “Having Mars tell us something a little bit different, it means that there’s some aspect of planetary behavior that has not yet been understood,” says Banerdt. “And so that’s really an exciting possibility that we’re going to learn something fundamentally new about the way planets work in a physical sense.”