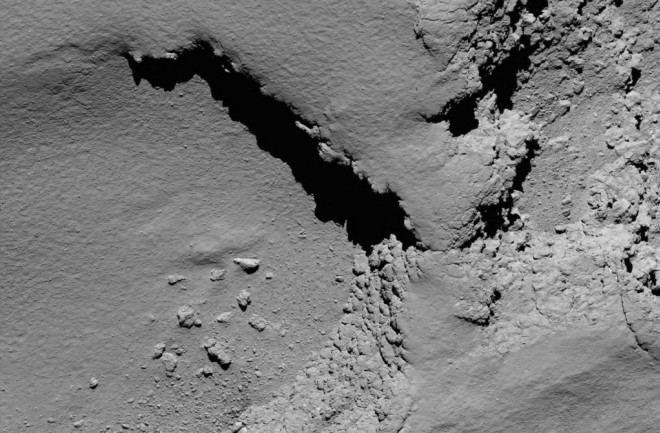 Rosetta captured this view of Comet 67P/Churyumov-Gerasimenko when the craft was 3.6 miles (5.8km) above its final resting place. (Credit: ESA/Rosetta/MPS for OSIRIS Team MPS/UPD/LAM/IAA/SSO/INTA/UPM/DASP/IDA) On this cold boulder-strewn surface lies Rosetta. The European spacecraft launched 12.5 years ago, into a life filled with exploration. Most of that time was spent traveling to her destination, Comet 67P/ Churyumov-Gerasimenko, where Rosetta has since perished. She arrived at that target on August 6, 2014, and spent 786 days exploring the comet’s long-hidden secrets. Her life ended this morning, with an intentional and controlled crash-landing into her two-year home. During her life, Rosetta showed how complex comets are. She revealed Comet 67P’s surprising shape: not of a potato as expected, but instead of two lobes that looks oddly like a duck. Astronomers think both of those lobes formed separately and then adhered together after a low-speed collision. The spacecraft’s 11 scientific instruments detected molecular nitrogen (the first time this compound had been seen at a comet), molecular oxygen, and several noble gases (argon, krypton, and xenon). From these detections and studies of the comet’s water ice, scientists gained a better idea of where Comet 67P had formed billions of years ago: in the distant, cold reaches of our solar system. Rosetta gave the astronomical community many more discoveries. She measured the comet’s mass and its physical dimensions, from which scientists could calculate a density. At 533 kg/m^3, Comet 67P is just over half as dense as water; it is probably made of ice-dust clumps grouped together in piles, with air pockets in between. Rosetta also spotted outgassing water across the surface — from cracks, pits, and smooth regions. And she documented for the first time what happens as the wind of energetic charged particles from the Sun collides with a comet. In November 2014, three months after Rosetta arrived at the comet, she sent another spacecraft, Philae, to the surface. Philae’s landing didn’t go as planned, and she bounced before resting at an awkward angle in a cliff. But scientists could still use that botched landing to learn about Comet 67P: its surface is harder than expected and covered in about 3cm of loose dust. Just four weeks before her own death, Rosetta photographed her friend Philae, laying in the shade on her side and surrounded by rocks. Rosetta has now joined Philae on Comet 67P’s surface — but at a different area on the surface. During Rosetta’s last hours, she captured photographs of her final resting place with increasing resolution. During that approach, she also sent back to Earth more data of dust and gas. And at 13:19 Central European Summer Time (5:19 AM Central Daylight Time in the United States), the mission’s control center received Rosetta’s last signal. So long, dear friend.

This is the last image Rosetta took, and it's the view from just 66 feet (20m) above the comet's surface. (Credit: SA/Rosetta/MPS for OSIRIS Team MPS/UPD/LAM/IAA/SSO/INTA/UPM/DASP/IDA) Yes, an obituary is a slightly odd way to reflect on a space mission, but it connects to something I’ve noticed a lot of lately: We personify our spacecraft. Cartoons of Rosetta on the mission’s website show it smiling and beady-eyed. When a spacecraft fails unexpectedly, like the Japanese ASTRO-H mission earlier this year, we mourn its passing like a friend lost too soon. And for a spacecraft that carried out its entire mission, we celebrate its life and plan for an appropriate way to go out — for example, joining it with the comet it rendezvoused with. Save