Rosetta Gets Up Close With a Comet

Photos from the Rosetta mission reveal some interesting features on the surface of Comet 67P. 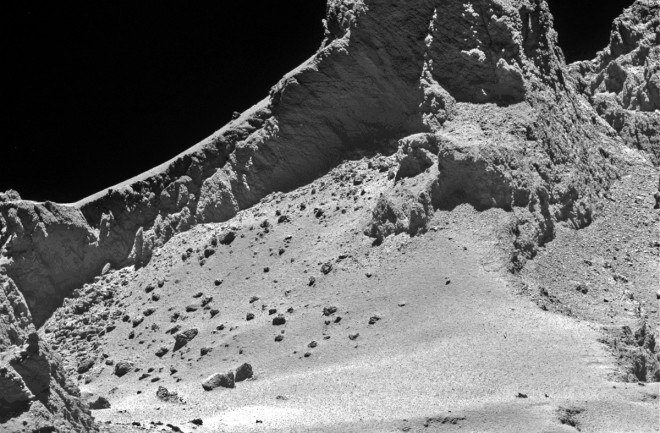 Its lander may be kaput, but the Rosetta mission is still kicking strong.

After not quite sticking the landing on its 4 billion-mile journey to Comet 67P/Churyumov-Gerasimenko last November, the Philae lander managed to complete its primary science mission in just 64 hours before losing power. It conducted all the planned experiments and sent the data to Earth, including the first images ever taken from a comet’s surface. The lander is now powerless because its solar panels are lying in shadow, but the obstructions might melt as the comet nears the sun, allowing Philae to return to life.

Meanwhile, the Rosetta probe orbiting the comet has been busy, revealing a striking array of surface features on Churyumov-Gerasimenko’s two-lobed nucleus. A surprising discovery: The water vapor emissions from the comet are significantly different from the stores on our planet, suggesting that asteroids, not comets, may have been the main source of Earth’s water.

Astronomers also have seen the comet release “fluffy” dust particles rich in sodium and lacking in ice. These particles probably collected on the comet’s surface after its previous close swing by the sun six-and-a-half years ago. The team soon hopes to observe a new type of particle as the comet sheds its fluffy dust layers.

Rosetta will witness this and other changes as Churyumov-Gerasimenko stalks the sun — its closest approach hits in August — and then leaves.