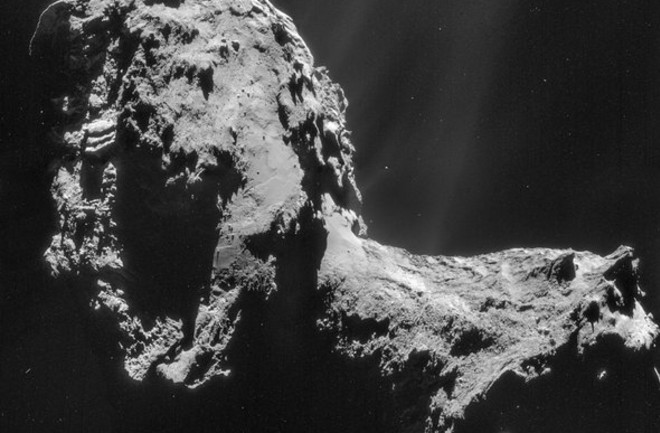 Comet 67P as seen by the Rosetta probe. (ESA/Rosetta/NAVCAM – CC BY-SA IGO 3.0) Europe’s Rosetta mission has only been in orbit around Comet 67P/Churyumov-Gerasimenko for a few months but it's already shed light on one of the central questions it was launched, ten years ago, to answer: Where did Earth's water come from? Based on evidence of the comet's water, Rosetta scientists announced this week that it adds evidence that, contrary to prevailing theory, comets didn't supply Earth with its water. The new findings instead suggest that asteroids were the likely bearers of life-giving H2O on our planet.

Since August, the Rosetta probe has been orbiting Comet 67P/Churyumov-Gerasimenko, and on Nov. 12, as you may already know, its Philae lander touched down on the surface — a first for mankind. But back aboard Rosetta, an instrument called Rosina has been taking measurements of the gasses spewing out of 67P. Using two mass spectrometers, Rosina can sift through the comet’s gas emissions and identify a unique signature of its water: the ratio of deuterium to hydrogen. On Earth, you can find three deuterium atoms for every 10,000 water molecules. So, the thinking goes, if you can find objects in space with the same deuterium to hydrogen ratio as water on Earth, those objects become prime candidates for sources of Earth’s water. Asteroids and comets are ideal subjects to study because they are essentially time capsules of what happened during the formation of our solar system and our planet. By examining comets today, we get a glimpse billions of years into the past.

According to data from Rosina, the deuterium to hydrogen ratio on 67P is roughly three times higher than that of Earth's oceans. The findings build upon previous measurements from other comets, and the story is getting clearer: comets weren’t the primary source of water on Earth. According to the European Space Agency, of the 11 comets we have deuterium to hydrogen measurements for, only two matched the unique signature of Earth’s water. However, meteorites originating from asteroids in the Asteroid Belt have matched the Earth’s water signature. Although asteroids carry less water, a high overall number of impacts could supply enough water to fill the oceans, according to the ESA. They published their findings Wednesday in the journal Science. With the recent revelation that we’ve only identified 10,000 of an estimated 1 million asteroids that could hit Earth, Rosetta’s findings are another reminder of Earth’s love-hate relationship with these cosmic drifters.