In these troubled times, enforced home-working is producing remarkable results for physicists and astronomers. 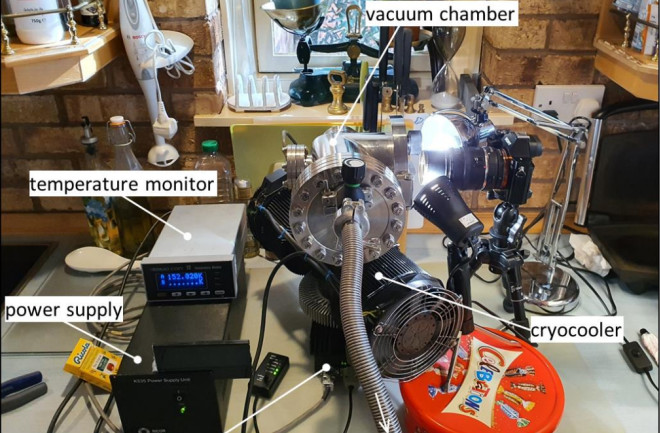 Physicists made a superconductor — in their kitchen. (Credit: Timokhin & Mishchenko/arXiv)

One of the great unsolved challenges in science is to create superconductors that work at room temperature. Now, in an extraordinary paper published at the beginning of this month, Ivan Timokhin and Artem Mishchenko have achieved room temperature superconductivity while working from a home during the COVID-19 lockdown.

The first “high temperature” superconductors — those that superconduct above -200 degrees Celsius — were discovered in the 1980s. These were made of yttrium barium copper oxide, a ceramic material with a critical temperature of around -166 degrees C.

Since then, physicists have discovered materials with progressively higher critical temperatures. The most recent excitement has focused on rare earth hydrides, such as LaH10 which superconducts at -23 C, albeit at enormous pressures of more than a million times atmospheric pressure. But the ultimate goal is to find materials that superconduct at room temperature.

Timokhin and Mishchenko say they have finally solved the problem using a novel approach. “Instead of increasing the critical temperature Tc of a superconductor, the temperature of the room was decreased to an appropriate Tc value,” they say.

Another important result has emerged from a team of astronomers based at the University of Oxford. Led by Trillian Pomalgu and Marven F Pedbost, this team have redefined the notion of a habitable zone, that region around a star that could support life.

The team, which includes TV star Chris Lintott from the Lamb and Flag, a well-known local hostelry, point out that most work in this area has focused on planets that may be suitable for life. “Until now, though, little work has been devoted to deciding which of the potentially habitable planets might actually be worth existing on,” they say. “To this end, we present the Really Habitable Zone, defined as the region around a star where acceptable gins and tonic are likely to be abundant.”

This is important work. “Astronomers have long been interested in alcohol,” say the researchers.

They go on to say that planets within the Really Habitable Zone could be visible to the James Webb Space Telescope, NASA’s next space observatory, which was originally planned to launch in 2007 but is currently scheduled to go up next year. “We suggest that planets in the Really Habitable Zone be early targets for the JWST, because by the time that thing finally launches we’re all going to need a drink,” they conclude.

Should NASA need a way to find other targets for the JWST, they could do worse than speak to Douglas Scott at the University of British Columbia in Vancouver. Working with long-time colleague Ali Frolop, he has come up with a new way to identify exoplanets that are likely to support life.

The new approach uses pure logic. Scott and Frolop start with a well-known example of inference and then apply it to the task of finding planets that might host life. The reasoning goes like this:

A) All elephants are grey B) Mice are grey C) Therefore, mice are elephants

“The search for life elsewhere in the universe follows a similar form of dialectical thinking,” say Scott and Frolop.

“We will suggest that this is not only logically sound, but that extending such reasoning gives us a way to select specific places where life is much more likely to be found,” they say. “It is clear that any characteristic similar to Earth’s should make life compulsory, according to pure logic.”

To prove the validity of this technique, Scott and Frolop use it to predict targets that astronomers have already identified as potential hosts for life. For example:

Indeed, Europa and Enceladus are already being studied by astronomers because of their potential to host life.

The evidence becomes even more powerful when considering that Titan starts with T, the same as Terra, which is Latin for Earth.

And, of course, astronomers have already identified Titan as another body that could host life. Clearly, pure logic has great potential to go further.

This type of powerful thinking is hard to argue against. Indeed, Scott and Frolop believe it will kick-start an entirely new approach to astrobiology. “We hope that some of these ideas will be pursued by future targeted exoplanet observations, as well as SETI searches,” they conclude.

One great advantage of astronomy is the insights it gives its practitioners into entirely unrelated fields of science. Take meteorology, for example, a field close to many astronomers’ hearts. Now the experiences of Michael B. Lund at the California Institute of Technology in Pasadena, have allowed him to develop a new theory of meteorology that could finally tackle droughts in areas of low rainfall.

Lund points out that his observing runs at the Palomar Observatory near Los Angeles are closely correlated with an increase in rainfall. For example, over a period of 16 nights, he experienced over 4 inches of rain, which is more than three times that expected. “The chance of this much rain by chance is significantly less than 1%,” he says.

This surprising correlation leads him to an innovative new way of generating rainfall in areas that desperately need water: Telescope allocation committees should give Lund observing time in regions suffering drought, which would then immediately experience increased rainfall.

Inspiring work from all concerned.

Refs: 1 April 2020 - Mentioned in this post: Novel approach to Room Temperature Superconductivity problem Defining the Really Habitable Zone  The search for life and a new logic Making It Rain: How Giving Me Telescope Time Can Reduce Drought

Other inspiring papers in a similar vein: Searching for Space Vampires with TEvSS Quantum Godwin's Law Cosmological Dark Matter: a Review State-of-Art-Reviewing: A Radical Proposal to Improve Scientific Publication An Artificially-intelligent Means to Escape Discreetly from the Departmental Holiday Party; guide for the socially awkward