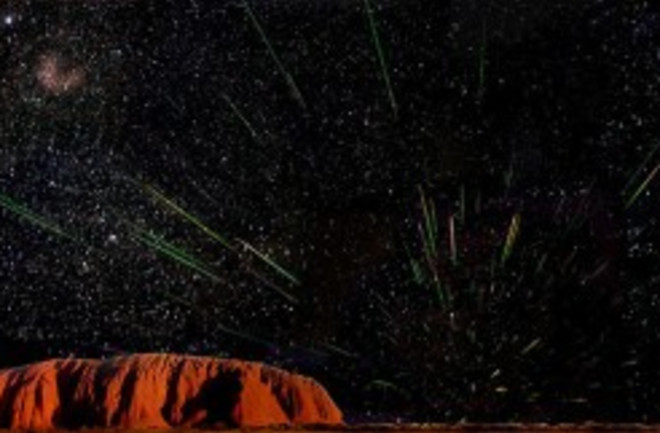 Taking the trash out the other night, I did what I always do: I looked up. The crescent Moon was setting, and I could see the Summer Triangle easily (after a few minutes, when my eyes adjusted a bit, I could see the Milky Way piercing through, too). As I walked back in, I happened to turn to the east. I could see the big square that marks the constellation of Pegasus, and to its lower left, the two curved lines of stars denoting Andromeda. Instantly, I saw something wrong. Andromeda doesn't have two stars so close together, I thought. Ah, I realized a second later, one of them must be a satellite. Sure enough, as I watched, one of the stars could be seen to be moving. I had a moment of disorientation when it was hard to tell which star was moving away from the other, but after a few seconds it was obvious which was the star and which was the satellite. It looked to be about second magnitude to my eye -- bright, but nothing special -- and moving quite slowly, slower than the space station does at that altitude off the horizon. Must be in a higher orbit, I thought, maybe twice as high? A bit higher? It was moving to the southeast, I noted.

I went inside, washed my hands (I was taking out the trash, after all) and got online. Firing up Heavens-Above.com, I quickly found a passel of satellites that had just gone overhead. Looking at the sky tracks of each, one jumped out: Cosmos 2219, an old spent Russian booster rocket. The path across the sky matched what I saw pretty well. Not only that, the orbit is listed as being about 830 km (500 miles) above the Earth's surface. That's much higher than the space station's orbit of 360 km (215 miles). Sure enough, that would account for the slower moving satellite I saw; the higher up the orbit is, the weaker Earth's gravity pulls on an orbiting object, and the slower it moves. And my initial guess of the actual orbital height wasn't that far off. And the pièce de résistance? As I watched the satellite move, I thought to myself, the Sun set over an hour ago. That means that right around that part of the sky -- mentally flagging a region near where Jupiter was -- the satellite'll fade out. Boom. Right on the money. Satellites are up so high that even when it's dark on the ground, they are in sunlight. As they orbit, they can move into the Earth's shadow and fade out. The height off the horizon of the edge of the shadow depends on how far below the horizon the Sun is (draw yourself a picture, or use a flashlight for the Sun and a ball for the Earth and experiment). So I was able to eyeball where the object would fade away, and like clockwork, it was right on schedule. I know I'm a scientist, and something of a dork, but it's still undeniable: science is everywhere. It's all around us, if you just take a moment to notice. From things too small to see (washing my hands to get rid of any germs from the trash) from things almost too big to grasp (the Milky Way laid out above me, sprawling across the sky a hundred thousand light years wide). Had I put the trash bin on the street and turned clockwise instead of counterclockwise, I might've missed that satellite, never predicted in my head when the Sun would set for it. But seen or unseen, it would have done what it did nonetheless. The Universe rolls on with or without us. But as I stood there, as I had so many times before, it reaffirmed what I know, what I've known for so long: This is a great ride. I'm keeping my eyes open. I don't want to miss anything.