Checking in with the man who says he discovered an advanced ancient civilization. 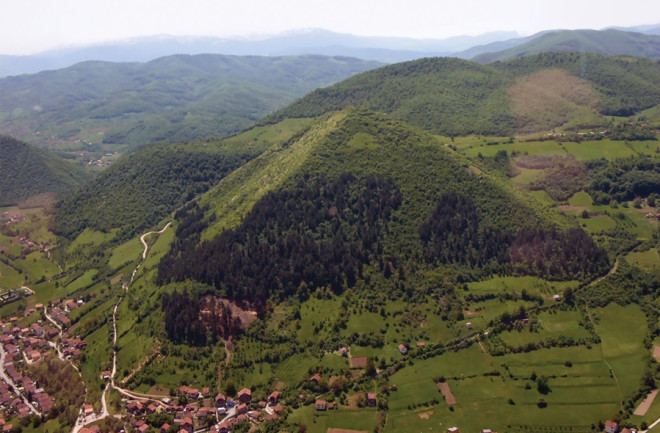 While some of the hills do resemble pyramids, experts believe they’re natural formations. (Credit: Sam Osmanagich)

In 2008, Discover profiled amateur archaeologist Sam Osmanagich, who claimed to have discovered the oldest and largest pyramids in the world. Located near the Bosnian city of Visoko and billed as “the most monumental construction complex ever built on the face of the planet,” the pyramids were allegedly made by a highly advanced civilization some 12,000 years ago.

While Osmanagich had no evidence, he did gather worldwide media attention, hundreds of volunteers aiding his excavation and legions of visitors to his so-called “pyramid valley.” The Bosnian government was thrilled with the boost in tourism and national pride, both welcome after the devastating Bosnian war of 1992-95. Osmanagich was a national hero.

The only problem was that the experts didn’t believe him. In 2006, the European Association of Archaeologists wrote an open letter to the Bosnian government denouncing the pyramids as a “cruel hoax on an unsuspecting public.”

Pyramid souvenirs are for sale in the central Bosnian town of Visoko, depicting the structure Osmanagich promises is nearby. (Credit: Danilo Krstanovic/Reuters)

What little credibility he may have had then is gone now: Ten years later, Osmanagich makes even more outlandish claims. He says the largest pyramid is clad in concrete superior to modern building materials, and sits over the most extensive underground network of tunnels ever discovered. This labyrinth purportedly features ceramic sculptures weighing several tons, the largest known in the ancient world.

Osmanagich also says he knows why the Bosnian pyramids were built. He claims they are energy amplifiers, capable of improving health and prolonging life — as well as communicating with “torsion fields” that travel much faster than the speed of light. Naturally, these remarkable feats could be achieved only by a society far ahead of our own. “They knew energy sources and frequencies better than we do, and how clean and free energy can be produced,” Osmanagich says.

Experts, of course, don’t buy it. “All of the ‘finds’ being made by Osmanagich are either natural features like rocks, or the result of long occupation in these valleys by people since the Greco-Roman period,” says Boston University archaeologist Curtis Runnels. “As for the supernatural powers he claims for these ‘pyramids,’ one only has to note that Mr. Osmanagich published a book claiming the Maya came from the Pleiades constellation.”

So while Osmanagich hasn’t discovered an ancient civilization with the secret to long life and free energy, he’s found something arguably more valuable. In the hills of Visoko, he’s uncovered a mechanism for generating free publicity.

This article originally appeared in print as "Pyramid Dreams."