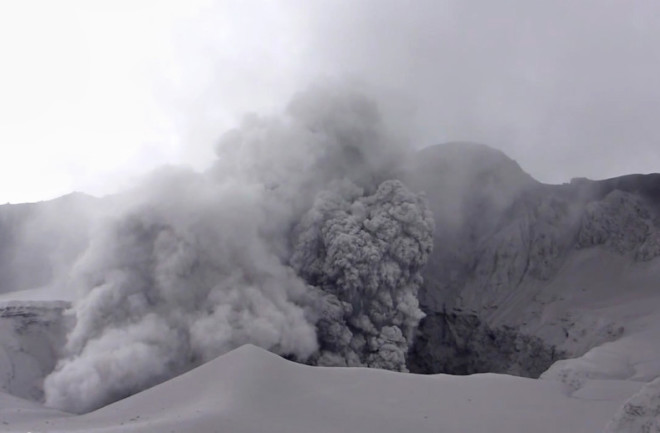 Video of the current eruption at Ubinas in Peru, taken from the edge of the summit caldera in early April. IG-Peru video For much of this spring, Perú's most active volcano has been rumbling. Ubinas, in southern Perú, has been experiencing small-to-moderate explosions that blanket the region around the volcano with a thin layer of ash since last year, but the frequency and size of these eruptions are slowly increasing since April 8. IG-Perú has reported multiple explosions over the last week that reached a few kilometers over the volcano's summit and the steam plume seen on the IGP webcam is a constant reminder that magma is likely just below the surface at Ubinas. You can check out some timelapse video of these explosions that really show how impressive (and ephemeral) they are. All of this renewed restlessness at Ubinas has prompted the alert level to be raised to Orange. The Observatorio Volcanólogico del Sur posted a video today of a (startlingly) up close views of the caldera at Ubinas (see above), showing the ash plume billowing from the vent . If you watch closely, you can see that this video was taken by someone standing on the edge of the caldera watching all this unfold - this is the kind of peril that volcanologists put themselves in to observe what a volcano is doing so people can warned. If the wind shifts or the eruption intensifies, you might only have minutes to get out, on foot or by helicopter.

A lahar carrying ash and volcanic debris down the slopes of Ubinas on April 13, 2015. IG-Peru video You might also notice in the video the thick layer of ash and bombs covering the floor/edges of the caldera as well. Now, with all this volcanic rock and ash being thrown over the slopes, the risk of volcanic mudflows (lahars) increases. The debris can mix with melting snow and ice on the volcano to produce a slurry with the consistency of wet concrete. The Observatorio Volcanólogico del Sur posted a video of just such lahars generated on Ubinas on April 13. The video captures both why lahars form and how they move. You can see that the area where the video is being filmed is covered in loose ash and debris---the ingredients for a lahar. Once you add enough water, the debris becomes fluidized and will flow. However, because it is a suspension of solids with water, it actually has a surprising amount of yield strength, so it can carry large pieces of debris with it. The flow in the video looks to be relatively thin at first, but large rocks are moving in the flow with relative ease (see above). This adds mass to the flow, making it able to pick up even more debris as it moves down the stream channel. That is the real danger of lahars: the ability to add material as they move downslope and become even more massive. Then they can knock out bridges, building and whatever else gets in their way. When the lahar reaches a floodplain, then it spreads out and buries everything (like one did in Armero, Colombia in 1985, killing over 25,000) and once the lahar stops flowing, it quickly solidifies into something like a natural cement. Most likely, this pattern of explosions and lahars will continue at Ubinas as this is the pattern of activity that volcano has exhibited over the last 1,000 years. However, in ~1082 AD, it did have a massive explosive eruption that spread ash over much of Perú and northern Chile, so careful monitoring will continue to see where this unrest leads.

Other notes from the world of volcanoes: The Observatorio Vulcanológico y Sismológico de Manizales posted a video of a small ash-rich explosion from Nevado del Ruiz in Colombia. Much like Ubinas, Ruiz has been in an extended state of unrest that occasionally produces these small-to-moderate explosions. The same can be said for Mexico's Colima and Popocatépetl, both of which continue to produce moderate ash-rich explosions. Some of these explosion have produced ash plumes that reached over 3 kilometers (~10,000 feet). None of this implies that something larger is in the works at either volcanoes, but rather magma is still rising to the surface to make lava domes that then allow for pressure to build until another explosion occurs. A small lava flow has been spotted in satellite images of Barren Island in the Indian Ocean. As the name implies, not a lot of people need to be concerns, but rough estimates show a flow that has reached over half a kilometer from the summit crater. In Japan, the Japanese Meteorological Agency (which is in charge of volcano monitoring) has raised an alert at Zaosan. Over the past few weeks, the volcano in northeastern Japan has had over 150 small earthquakes and tremor, suggest magma moving under Zaosan. Last year, Zaosan was added to a list of Japanese volcanoes that needed 24 hour monitoring. No eruption has occurred yet, but as magma rises, the chances of phreatic (steam-driven) explosions rise as well, so local authorities want to be sure there is no repeat of last year's Ontake tragedy. The last eruption at Zaosan was a small explosive event in 1940.