Particles that move faster than c might sound like pure sci-fi, but it wouldn't be as hard to square with current physics as you might think. 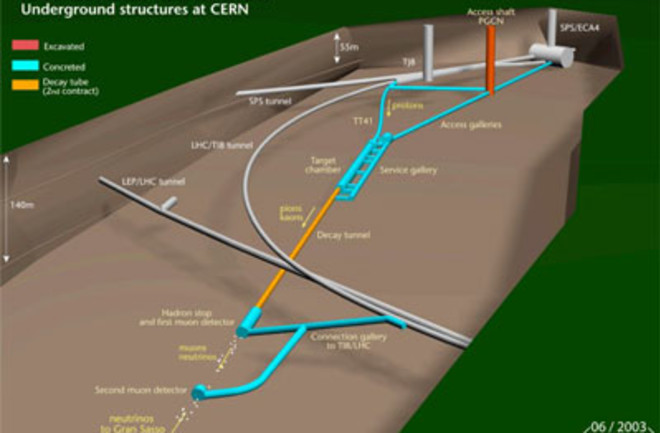 CERN fired the neutrino-shot heard round the world.

By now you’ve probably heard the widely reported news about the possible discovery of neutrinos that allegedly travel faster than light. The OPERA (Oscillation Project with Emulsion tRacking Apparatus) collaboration of almost 200 scientists working at the Gran Sasso underground laboratory in central Italy has discovered a phenomenon the physicists could simply not explain. For over three years, the scientists have been collecting data on the flight of neutrinos—those mysterious, nearly massless particles that can travel through anything at immense speed—originating in the SPS accelerator at CERN, near Geneva, and traveling underground all the way to Gran Sasso, 731 kilometers (about 450 miles) away. The experiment showed that the 16,000 neutrinos measured at Gran Sasso had traveled there through Earth’s crust at faster than light speed.

Facing a crowded lecture hall at CERN last Friday, Dario Autiero of the OPERA group explained how the researchers went to great lengths to remove any sources of error in their measurements: they measured distances using an extremely high-precision GPS called PolarX, measured time at the two locations to an accuracy of one nanosecond using cesium clocks, and accounted for the tides, Earth’s rotation, variations between day and night and spring and fall, etc. The statistical significance of the finding was six-sigma—meaning that the probability that the experimental result was a random fluke was only one in a billion. For a full hour after the presentation, Dr. Autiero was grilled by a roomful of physicists, and seemed to be able to account for all of the many potential errors brought up by the audience.

But physicists remain very skeptical. They want to see a confirmation of the findings from another experiment in a separate laboratory before they accept such a bizarre finding. After all, this result, if true, would appear to run against the spirit of Einstein’s special theory of relativity. When I showed the Gran Sasso paper to Nobel Laureate Steven Weinberg, he told me: “It looks pretty impressive, but I still think that this will go away.” The sentiment was echoed by almost every physicist I have spoken with since. The results seem mind-boggling. After all, nothing can go faster than light, right?

Popular accounts of Einstein’s theory of relativity describe the speed of light as a kind of cosmic “speed limit,” conjuring images of a person driving a car on a highway, accelerating until they see flashing lights behind them: the limit has been broken. This analogy seems to work for most particles found in nature. The protons of the Large Hadron Collider, for example, require immensely powerful superconducting magnets, and the electrical energy equivalent to that consumed by an entire city, to accelerate them to close to the speed of light. And everyone knows that it is impossible to make them actually reach light speed: for this to happen would require infinite energy, and the protons’ masses would then effectively become infinite.

But the “speed limit” model does not work for all particles. When you turn on your flashlight, the photons created by the light bulb are born with light speed—they speed away at exactly the speed of light: they don’t accelerate to it. Of course photons are massless, so they are allowed to travel at that speed. Neutrinos, too, are born with their speed, whatever that speed may actually be. Neutrinos are particles that pass through everything, and they likely do not start at a low speed and accelerate to reach a higher one as do the LHC protons. And they are not known to slow down, either. In fact, it would take a light-year of lead to effectively block a neutrino. It won’t slow down—it would just interact with matter, eventually, through the weak force, and cease to exist as a neutrino.

It is here that the problem with the “speed limit” description is buried. Einstein’s special theory of relativity does not say that nothing can go faster than light. It says that you cannot cross the light-speed barrier: you can’t accelerate to and past the speed of light in vacuum. But the special theory of relativity allows the possibility that a particle is born with a speed greater than light. In such a case, it can’t slow down to cross the speed-of-light barrier from above. If you are born subluminal, you must stay subluminal, and if you are born superluminal, you have to remain superluminal.

So if the results of Gran Sasso are borne out by other experiments, then neutrinos are, in fact, tachyons—hypothetical particles, never before observed (except on Star Trek), that travel above light speed, and stay there. They are allowed to exist by the special theory of relativity and they do not contradict it. Of course, a whole host of other problems would then emerge: their mass would have to be “imaginary” (described using the square root of -1) and they would open the Pandora’s box of the possibility of time travel and its effects on causality (though Sean Carroll argues that FTL neutrinos wouldn’t necessarily be able to go back in time).

Why did this very exacting experiment find signs of neutrinos appearing to travel faster than light? Is there a fiendish error skewing the data? The physics world thinks so, but only more experimental data will answer the question for sure.

Amir D. Aczel is a researcher at the Center for the Philosophy and History of Science at Boston University and the author of 18 books about mathematics and physics, as well as numerous research articles. He is a Guggenheim Fellow and a frequent commentator on science in the media. See more at his website or follow him on Twitter: @adaczel