[Update: Some people in the comments are complaining I didn't use metric units in this article. I'll assume they're new to my blog; I usually do use metric. However, note the original quote by Steve Jobs is in Imperial units, not metric, so I used those for consistency. Also, the units don't matter, since I could have used pixels per hogshead if I felt like it. What matters is the way the numbers compare to each other, as long as the units are consistent.] 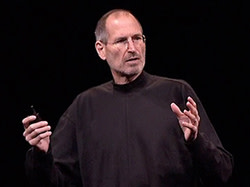 With much bruhaha, Steve Jobs and Apple revealed the new iPhone 4 yesterday. Among other features, Jobs said it has higher resolution than older models; the pixels are smaller, making the display look smoother. To characterize this, as quoted at Wired.com, he said,

It turns out there’s a magic number right around 300 pixels per inch, that when you hold something around to 10 to 12 inches away from your eyes, is the limit of the human retina to differentiate the pixels.

In other words, at 12 inches from the eye, Jobs claims, the pixels on the new iPhone are so small that they exceed your eye's ability to detect them. Pictures at that resolution are smooth and continuous, and not pixellated. 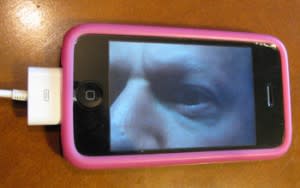 However, a display expert has disputed this. Raymond Soneira of DisplayMate Industries, was quoted both in that Wired article and on PC Mag (and other sites as well) saying that the claims by Jobs are something of an exaggeration: "It is reasonably close to being a perfect display, but Steve pushed it a little too far". This prompted the Wired article editors to give it the headline "iPhone 4’s ‘Retina’ Display Claims Are False Marketing". As it happens, I know a thing or two about resolution as well, having spent a few years calibrating a camera on board Hubble. Having looked this over, I disagree with the Wired headline strongly, and mildly disagree with Soneira. Here's why. First, let's look at resolution*. I'll note there is some math here, but it's all just multiplying and dividing, and I give the answers in the end. So don't fret, mathophobes! If you want the answers, just skip down to the conclusion at the bottom. I won't mind. But you'll miss all the fun math and science. 1) What is "resolution", really? Imagine you see a vehicle coming toward you on the highway from miles away. Is it a motorcycle with one headlight, or a car with two? As the vehicle approaches, the light splits into two, and you see it's the headlights from a car. But when it was miles away, your eye couldn't tell if it was one light or two. That's because at that distance your eye couldn't resolve the two headlights into two distinct sources of light. The ability to see two sources very close together is called resolution. It's measured as an angle, like in degrees. For example, the Hubble Space Telescope has a resolution of about 0.00003 degrees. That's a tiny angle! I'm simplifying here a bit, but you can think of this as saying that two stars farther apart than that are seen as two objects; if they are closer together, even with Hubble they appear as a single object. Since we measure resolution as an angle, we can translate that into a separation in, say, inches at certain distance. A 1-foot ruler at a distance of about 57 feet (19 yards) would appear to be 1 degree across (about twice the size of the full Moon). If your eyes had a resolution of 1 degree, then the ruler would just appear to you as a dot. 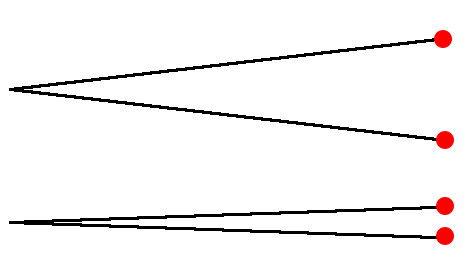 At a given distance, two objects closer together have a smaller angle separating them, making them harder to distinguish from each other. Note that in the image above, the circles on top are farther apart, with a bigger angle between them (imagine you are looking at them from the left, where the black lines intersect). At some point, the objects are so close together, and the angle so small, the two merge into one object as far as your eye is concerned. That's your resolution limit. What is the resolution of a human eye, then? Well, it varies from person to person, of course. If you had perfect vision, your resolution would be about 0.6 arcminutes, where there are 60 arcmin to a degree (for comparison, the full Moon on the sky is about 1/2 a degree or 30 arcmin across). To reuse the ruler example above, and using 0.6 arcmin for the eye's resolution, the 1-foot ruler would have to be 5730 feet (1.1 miles) away to appear as a dot to your eye. Anything closer and you'd see it as elongated (what astronomers call "an extended object"), and farther away it's a dot. In other words, more than that distance and it's unresolved, closer than that and it's resolved. This is true for any object: if it's more than 5730 times its own length away from you, it's a dot. A quarter is about an inch across. If it were more than 5730 inches way, it would look like a dot to your eye. So you can think of this 5730 number as a scale factor; multiply an object's size by that, and, if your vision is perfect (OOOooooo, foreshadowing!) you get how far away you can see it as more than a dot. 2) Power to the pixel So what does all this mean for the iPhone? First, here are the claims. Jobs claims the iPhone held at 12 inches from your face has pixels too small to be resolved by your eye. Soneira, the display expert quoted in the magazine articles, disputes that. He uses the 0.6 arcmin resolution for the human eye (so we use the scale factor = 5730). Let's use that and run the numbers. Something 12 inches away means your eye can resolve dots that are bigger than 12 inches / 5730 = 0.0021 inches So if the pixels on the iPhone are smaller than 0.0021 inches in size, then Jobs is right. Your eye won't resolve them. If the pixels are bigger, Soneira is right, and your eye can resolve them. The actual iPhone 4 has 326 pixels per inch (the display is 960 pixels high, and about 2.9 inches in length). You have to flip that to get the size of the pixel in inches: 1 / 326 = 0.0031 inches Uh oh! Things look bad for Jobs. The iPhone pixels are too big! At one foot away, your eye can resolve the pixels, and Jobs must be lying! Or is he? Remember, Soneira used the 0.6 arcmin resolution of the eye, but that's for perfect eyesight. Most people don't have perfect eyesight. I sure don't. A better number for a typical person is more like 1 arcmin resolution, not 0.6. In fact, Wikipedia lists 20/20 vision as being 1 arcmin, so there you go. If I use 1 arcminute instead, the scale factor is smaller, about 3438. So let's convert that to inches to see how small a pixel the human eye can resolve at a distance of one foot: 12 inches / 3438 = 0.0035 inches Aha! This means that to a more average eye, pixels smaller than this are unresolved. Since the iPhone's pixels are 0.0031 inches on a side, it works! Jobs is actually correct. [Note: in the articles about all this, they used units of pixels per inch, whereas I've used the size of the pixels themselves. You can flip all these numbers to convert. The iPhone4 has a resolution of 326 ppi (pixels per inch). Soleira says the eye can resolve 1 / 0.0021 = 477 ppi. However, normal vision can see at 1 / 0.0035 = 286 ppi. So the density of pixels in the iPhone 4 is safely higher than can be resolved by the normal eye, but lower than what can be resolved by someone with perfect vision.] 3) So what does all this mean? Let me make this clear: if you have perfect eyesight, then at one foot away the iPhone 4's pixels are resolved. The picture will look pixellated. If you have average eyesight, the picture will look just fine. So in a sense, both Jobs and Soneira are correct. At the very worst, you could claim Jobs exaggerated; his claim is not true if you have perfect vision. But for a lot of people, I would even say most people, you'll never tell the difference. And if you hold the phone a few inches farther away it'll look better. So in my opinion, what Jobs said was fine. Soneira, while technically correct, was being picky. So I mildly disagree with him about that. I had to laugh, though: his dismissing (near the bottom of the Wired article) of the Quattro TV's use of a fourth, yellow, pixel is dead on. When I first heard of that I knew right away it was a silly claim. Still, the headline used by Wired.com was clearly incorrect; Jobs wasn't falsely advertising the iPhone's capabilities at all. I'll note that I like Wired magazine quite a bit, and what we have here is most likely just an overzealous editor. But a lot of people read the headlines and it taints their view; someone reading that article may be more likely to think Jobs, once again, has overblown a product to excite people. He didn't. So, in this case, I hope I've... [wait for it, wait for it] ... made things clear.

Related posts: - Moon Hoax: Why not use telescopes to look at the landers? - My New Years Resolution