Tsantsas, or shrunken heads, were a tradition for Indigenous tribes living in the Amazon rainforest. 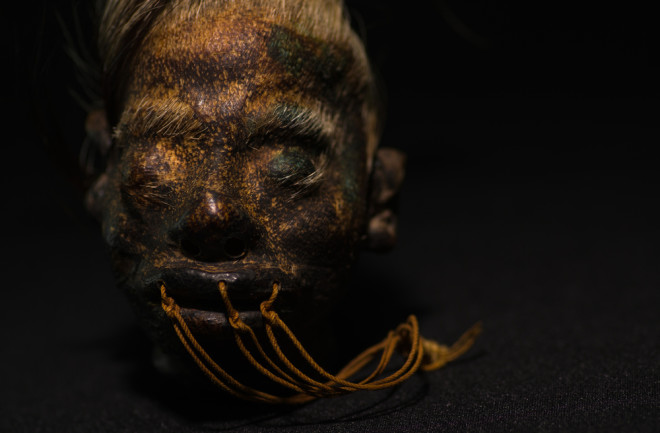 A revolutionary scanning technique has allowed researchers to peer inside a shrunken head for the first time and confirm it was human, and not one of the many counterfeits manufactured for European fascination.

Indigenous tribes living in the Amazon rainforest between the borders of eastern Ecuador and northern Perú crafted tsantsas (shrunken heads).

Though the story of the tsantsas remains shrouded in mystery, anthropologists broadly believe that the Shuar and Achuar tribes created them to trap the souls of their enemies.

The artifacts are stored in museums across Europe and the Americas, and could offer researchers a window into the unique cultural practices — not to mention the human story behind each one.

“The tsantsa are a very important part of what [Shuar] traditions were and how they were changed through different colonization periods,” says Maria Patricia Ordóñez at the San Francisco University in Quito, Ecuador. “Today they are a symbol of their identity.”

The problem is, not all are what they seem.

After missionaries came into growing contact with Amazonian people in the 20th century, they developed a fascination with the folkloric artifacts and began collecting them.

Eventually, a huge market for Westerners fascinated with the exotic practice opened. The market filled in the 1950s, ‘60s and ‘70s not with human heads, but a wave of forgeries made from the skin of sloths, monkeys and goats. Some may have even been created from human heads from morgues.

“The trick is we don't know which is which,” says Andrew Nelson, an archaeologist at Western University in Ontario.

The local Sulman family donated the apple-sized specimen to the Chatham Kent Museum in Ontario in the 1940s, for example. Experts know little of its provenance, except that the Sulman’s collected it from Indigenous peoples in Northern Peru.

Of the tsantsas, experts estimate 80 percent are fake and there are many signs in their manufacturing that give them away, Nelson says.

It is thought that they removed the skull in a ceremony before sewing the eyes and mouth shut on the tsantsa so that the soul could not speak evil of its captors or seek revenge.

Inaccurate facial features can give away a counterfeit tsantsa. It could be made of animal skin, moulded into the shape of a human. It may have a hairier face, which could be sloth skin. It could lack the wooden pegs often used to sew the mouth shut, or it could possess short hair, compared to the typical long-flowing hair.

The only way to really be sure, however, is to look inside. The Chatham Museum specimen, for example, has the flowing hair typical of genuine tsantsa, but lacks the wooden pegs, which would suggest it is fake.

To investigate without hacking away at the irreplaceable artifact, researchers put the head in a micro-CT scanner.

Like ordinary CT scanners used in hospitals to look inside the body, micro-CTs create an internal cross-section, but in much higher detail. And by beaming the high-powered x-rays at the object as it spins, it can also recreate a 3D model in unparalleled detail.

Splicing through the object reveals details otherwise unseeable to the human eye, such as different layers that form a ceramic. Nelson has used the $800,000 machine to look inside the bindings of mediaeval books and peer inside meteorites.

In the tsantsa, Nelson and colleagues could look inside the dermis, the middle layer of the skin, and examine the individual hair follicles. The micro-CT revealed they were natural, not manually implanted and ultimately that the specimen is human.

Researchers discovered the Chatham tsantsa was human, but they may have also revealed the complexity of the tradition.

The attributes associated with both fake and genuine heads featured in this case suggest “maybe there's a broader range of characteristics in these things than is fully appreciated,” Nelson says.

While the roughness of the vertical cut at the back of the skull matches those prepared in traditional Shuar ceremonies, the use of modern thread in the stitching of the main incision, eyes and lips suggest that it is a commercial production.

It is unlikely a shaman crafted the head, and it was ceremonial, the authors say, though they are uncertain.

It is probable that the practice of different Shuar and Achuar groups varied, causing the variation, the authors say.

The study also suggests that either the outsiders who made the replicas were astute at mimicking the indigenous groups’ manufacturing process, or the Shuar and Achuar themselves were making commercial tsantsas.

To better identify ceremonial and non-ceremonial heads they will need to scan more, the researchers say.

The Shuar themselves are keen to hear the results, says Patricia Ordóñez, who is running DNA studies on some specimens.

The group’s history is largely oral, passed down from generation to generation.

Through time, their relationship with the tsantsas has transformed, largely due to the missionaries who saw the tsantsa rituals as evil and stamped them out, the forensic anthropologist says.

By the 1950s, most Shuar either did not know how to carry out the tsantsa ritual or no longer wanted to. In the 1960s, the Ecuadorian government outlawed the practice.

The Shuar have told some researchers they only carried out the practice on enemies as a form of punishment. And some modern day groups have said the tsantsas were clan leaders that died from natural causes and that their soul was contained in a tsantsa to show respect.

“From the early 20th century, they were considered a war trophy, but today they are actually recognized as a very important part of their intangible heritage” Patricia Ordóñez says.

The tsantsas are a central part of the Shuar’s tradition and they are keen to know precisely where they came from, which Maria hopes to identify with DNA analysis. It could lead to returning the real heads back to the Amazon in the future.

Nelson says it is important to remember that while the tsantsa could offer invaluable insight, in some cases they are not merely a museum artifact.

“Having determined that the head is human, it's important now that we treat that head with respect,” Nelson says. “This is a person: they lived, they loved, they were part of a culture and ultimately they got turned into a tsantsa.”