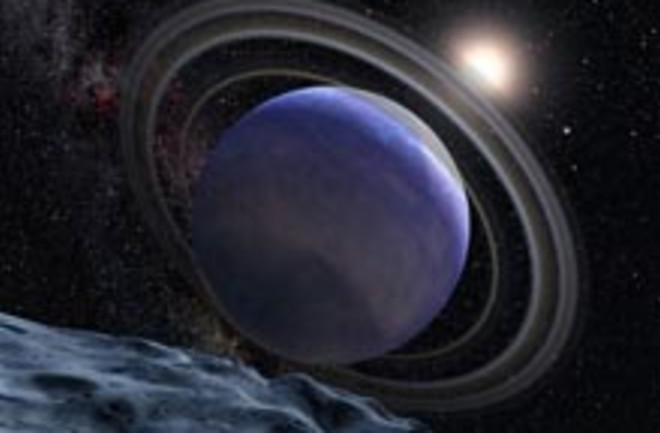 The first ever picture of an exoplanet was taken 11 years ago--but no one noticed. Now, in a new study, astronomers have subtracted the starlight from an image taken by the Hubble in 1998, and found the exoplanet by its dim infrared glow. While some exoplanets were detected before 1998, they were discovered indirectly by observing their influence on their parent stars; this was was seen directly. The new technique has excited researchers wondering how many more new planets can be found in old, archived data.

"They've dug up old Hubble images and found a planet! Crazy!" Geoff Marcy, an astronomer at the University of California, Berkeley, commented by email. "This will spawn a wild race by astronomers everywhere in the world to dig out their old Hubble images to hunt for planets lost in the rubble of the Hubble" [National Geographic News].

Last year, a group of researchers found a trio of gas giants around the star HR8799, which is about 130 light-years from Earth. Alerted that another group of planet-hunting astronomers

had used the Hubble camera in 1998 to image the same star but had come up empty-handed, [the research team] reanalyzed the 11-year-old Hubble images of HR 8799. After subtracting the scattered starlight estimated from the new model, the astronomers recovered the outermost of the trio of planets recently imaged [Science News].

The newly discovered image, which will be published in an upcoming Astrophysical Journal Letters, also revealed some new information about the exoplanet's physical characteristics.

, says study coauthor Travis Barman. Related Content: 80beats: New Telescope Could Reveal a Milky Way Packed With Habitable Planets 80beats: Small, Rocky Exoplanet Is the Most Earth-Like World Ever Seen 80beats: Hubble Reports First Ever Signs of Carbon Dioxide on an Exoplanet 80beats: Four Exoplanets Sighted, One Close Enough to Dream of “Sending Spacecraft There” DISCOVER: How Long Until We Find a Second Earth?Image: NASA, ESA, and Z. Levay (STScI). An artist's rendition of the exoplanet.