Researchers Come Closer Than Ever to Defining Our Place in Space

The biggest structure in the universe has been mapped, offering a whole new way to think about "you are here." 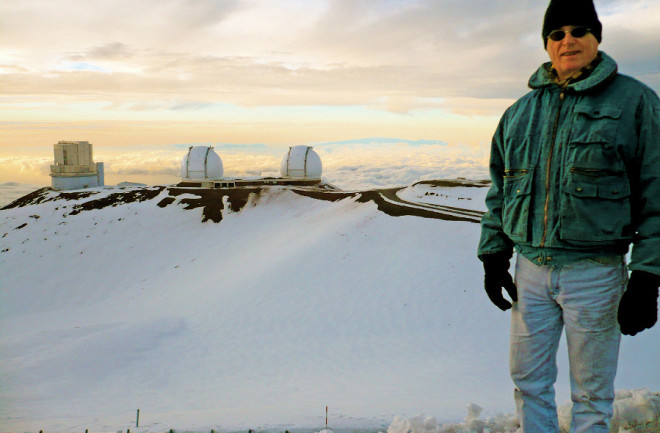 Brent Tully, atop Mauna Kea in Hawaii, maps our galaxy’s whereabouts in the cosmos. Thanks to his cosmic map, he can show you precisely where we sit in the universe. Stephane Courteau

Chances are, you’ve never met Brent Tully, and yet he knows exactly where you live. Better than you do, in fact — and probably better than anybody else in the world. Working at the University of Hawaii’s Institute for Astronomy, he has spent decades researching the locations and distributions of galaxies across deep space. Oh sure, if you just want your location in a city, your phone’s GPS can do that. But if you want to find your address in the universe as a whole, Tully is your go-to guy.

In terms of what he does and why he does it, Tully falls in with a long line of cartographers who’ve helped to make sense of the world and our place in it. But rather than filling in the terra incognita of our planet, he’s plotting the lay of the cosmic land, sketching oceans of empty space and the shorelines of vast superclusters of galaxies.

Tully teased some of his latest findings two years ago at a conference in Marseille, France, held partly in honor of his 70th birthday. Then last September, he and his colleagues published a paper in Nature that unveiled their completed masterwork, a map of a single cosmic structure at least 500 million light-years in diameter. It contains about 100 quadrillion times the mass of the sun, equivalent to 100,000 Milky Ways. If you put the size of the structure in miles, it would be a 3 followed by 21 zeroes. It’s big.

Tully and company propose calling this greatest-known cosmic feature “Laniakea,” from the native Hawaiian words meaning “immeasurable heaven.” The name is evocative yet strangely ironic. Laniakea is measurable, and with this latest discovery, researchers have come closer than ever to defining humanity’s true place within the heavens.

Putting Stars in Their Places

The philosophical inspiration behind Tully’s cosmic cartography comes from a multitude of mapmakers, but the scientific inspiration can be traced back to a single person: German astronomer and mathematician Friedrich Bessel.

In 1838, Bessel observed the apparent back-and-forth movement of the star 61 Cygni that results from our shifting perspective as Earth orbits the sun, an effect known as parallax. The movement was tiny — just 1/100,000th of a degree. (For comparison, the full moon spans half a degree.) But it was enough for Bessel to deduce correctly that 61 Cygni is about 10 light-years away. For the first time in history, humans knew the stars not just as points on a sky chart but as objects with defined locations in three-dimensional space.

Bessel’s approach was far too limited to reach beyond our immediate galactic neighborhood, much less to the cosmic scales that Tully reckons, but it provided the crucial first step. Parallax made it possible to quantify the distances to the closest Cepheid variables, stars whose brightness varies regularly over time. That period of variation is directly related to their true luminosity, so if you measure the period, you’ll know the luminosity. Compare that with the apparent brightness and you know the distance, even at larger scales where parallax measurements are impossible.

Starting in 1914, American astronomer Harlow Shapley exploited the Cepheids to derive the overall shape of the Milky Way, and to show that we are in the outskirts of our galaxy, far from the crowded core of stars at the center. A decade later, Shapley’s rival Edwin Hubble pushed the same technique much further and measured the distance to what was then known as the Andromeda Nebula, showing that it is actually a full-fledged galaxy far outside our own. Hubble then discovered the expansion of the universe, cementing his scientific fame and forever eclipsing Shapley.

Our solar system sits on a minor spur off an outer arm of our home galaxy, the Milky Way. NASA/JPL-Caltech/R. Hurt/(SSC-Caltech)

It is worth pausing to consider how far the art of cosmic cartography has come. Less than a century ago, nobody knew if other galaxies even existed. Now Tully and his cohorts are treating entire galaxies as mere coordinate points on a map of superclusters — that is, clusters of clusters of galaxies — that extends more than 200 times the distance to Andromeda.

The path to Laniakea required combining Cepheid measurements with five other forms of surveying tools, overlapping the data on top of each other to reach out to greater and greater distances. Tully himself is largely responsible for one of the key techniques he used, the Tully-Fisher relation, which links a galaxy’s rotation speed to its intrinsic luminosity. Then, as with the Cepheids, he could compare that luminosity with the galaxy’s apparent brightness to figure out its true place in deep space.

Identifying the locations of galaxies is only one aspect of creating a meaningful map, however. While Tully and his colleagues were surveying Laniakea, they also developed a novel way to designate landmarks. On Earth, it is easy to mark your location against familiar objects like rivers and mountain ranges. Space, it turns out, has its own markers.

By analogy with the way water flows on Earth, Tully looked at what he calls “watersheds” in space. He and his team measured the velocity of each galaxy, separated from the overall expansion of the universe. They ended up with a map of local galactic motions.

Just as water from the middle third of the contiguous United States flows toward the Mississippi River, Tully found that galaxies across about 500 million light-years of space flow toward a previously discovered enormous and dense region known as the Great Attractor because of its powerful gravitational pull. Tully describes it as “downtown Laniakea.”

The new picture amplifies Shapley’s humbling realization of a century earlier. Our Milky Way belongs to a meager gathering of about 54 galaxies called the Local Group. The Local Group lies on the outskirts of a much greater clumping of galaxies called the Local Supercluster, which collectively are on the fringes of Laniakea. If the Great Attractor is downtown, we are truly in the cosmic boondocks.

Such grand pronouncements can still sound awfully abstract, and Tully is working to change that. “My moment of epiphany came 20 years ago when I was in a CAVE [a virtual reality room with images projected onto the walls] at the supercomputer center in Illinois,” he says. “I could stride across the Local Supercluster in a few steps. Suddenly, I felt like these galaxies really exist there. This is reality, just on a scale that’s generally inaccessible. We’d like to end up with a digital atlas that helps inform the public — as well as my colleagues, as well as myself — about where we live.” You can find Tully’s early, rough attempts on his homepage here.

Scientifically, the discovery of Laniakea already feels very real. It bolsters theories of dark matter, since there must be significant unseen mass out there to account for the supercluster’s pull. It also tests theories of cosmic origins, since observations of the background radiation from the Big Bang indicate that structures bigger than Laniakea should not exist.

But beyond downtown Laniakea, Tully has begun mapping out an even greater concentration of galaxies called the Shapley Concentration. (It seems Harlow Shapley, who recognized an overabundance of galaxies in that direction but lacked the tools to understand its true nature, finally got his due.)

“I don’t think the story is going to be close to well understood until our maps are encompassing the whole domain around the Shapley Concentration,” Tully says. That will require maps going out to over a billion light-years. “It’s a huge job, but doable on a time-scale of decades,” he says cheerfully. The Shapley Concentration is so huge and massive that it is yanking all of Laniakea, and us with it, toward the southern-sky constellation Centaurus.

Such large-scale motions have giddy, ego-testing implications. On the one hand, we are all traveling with Laniakea’s gravitational flow, our fate dictated by the combined pull of thousands of faraway galaxies. But if you look at the very biggest picture, our place in the universe is defined by the Big Bang, an equal expansion of space in all directions. That’s why, on the largest scales, all galaxies seem to be moving away from each other: Every location not only looks like the center of the expansion, in a meaningful sense, it truly is.

You can picture the place where you live as the outer arm of a spiral galaxy, in a remote region of the Local Supercluster, in the boondocks of Laniakea. Then again, you also can, with equal accuracy, picture a universe unfolding around you. The center of expansion — the center of the universe, really — is located exactly where you are sitting right now.

[This article originally appeared in print as "Your Place in Space."]