Researchers Capture the First-Ever Image of a Single Molecule 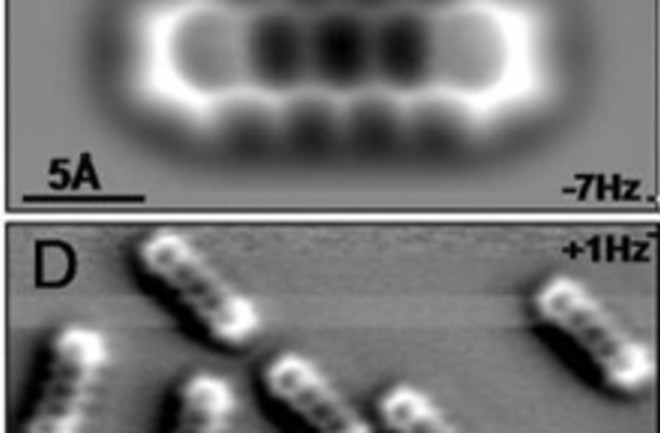 With a lot of skillful maneuverings, a team of researchers have finally found a way to image a molecule. The portrait of pentacene, an organic molecule consisting of five benzene rings, shows off the chemical bonds between the carbon and hydrogen atoms. It may seem a somewhat surprising first, since atoms have been imaged for decades.

The earliest pictures of individual atoms were captured in the 1970s by blasting a target – typically a chunk of metal – with a beam of electrons, a technique known as transmission electron microscopy (TEM).... But strange though it might seem, imaging larger molecules at the same level of detail has not been possible – atoms are robust enough to withstand existing tools, but the structures of molecules are not [New Scientist].

In the new study, published in Science, researchers used an atomic force microscope to image the molecule in unprecedented resolution.

The measurement requires extremes of precision. In order to avoid the effects of stray gas molecules bounding around, or the general atomic-scale jiggling that room-temperature objects experience, the whole setup has to be kept under high vacuum and at blisteringly cold temperatures [BBC News]

; 5 Kelvin, to be exact. Rather than relying on an optical system to produce pictures, atomic force microscopes use a probe that narrows to an atomic-scale tip, and measures the forces of attraction between the tip and the molecule's components. Lead researcher Leo Gross was able to get the shot of pentacene because he stuck a molecule of carbon monoxide (CO) on the tip of the probe.

Previously, there have been problems with the tips accidentally sticking to the molecules, and dragging them around the surface during the imaging process. 'The CO doesn't bond to the pentacene molecule,' Gross says, and this means the tip can get very close to the molecule and therefore provide a better image [Chemistry World].

field of "molecular electronics", a potential future for electronics in which individual molecules serve as switches and transistors [BBC News].

In June, Gross released another study showing that atomic force microscopy could

image the amount of charge on single atoms. "Now we would like to combine these two works, to observe the transport of charge through molecules on the single electron scale" [Chemistry World]