Remnants of a Supernova Are Pummeling Earth 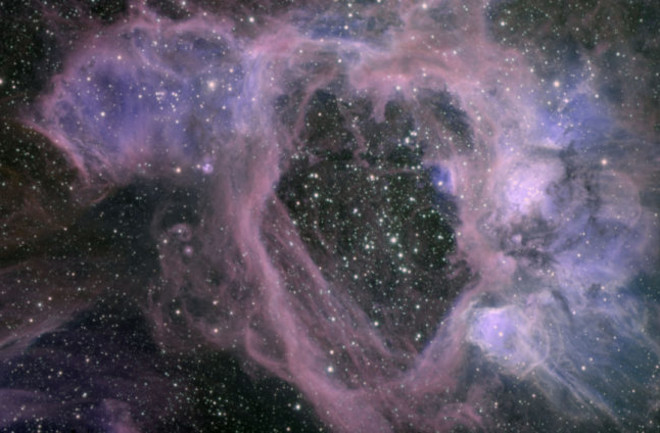 Cosmic rays are accelerated toward Earth by the same kind of supernova explosions that carved this bubble into the Large Magellanic Cloud. (Credit: Gemini South Telescope in Chile; composite by Travis Rector of the University of Alaska Anchorage)

Sometime in the last few million years, a not-so-far-off supernova sent charged particles known as cosmic rays out in all directions. The scattered, stripped nuclei of radioactive iron isotopes eventually made their way to Earth as part of a larger stream of material. Now, researchers at Washington University in St. Louis have found traces of this stream bombarding our planet, bringing interstellar atomic debris crashing into Earth.

In a paper published Thursday in Science, the researchers report on the findings of 17 years worth of observation from the Cosmic Ray Isotope Spectrometer aboard NASA’s ACE craft. During that time, it detected 15 individual nuclei of iron-60, a by-product of supernova explosions. Because iron-60 tends to decay quickly, and cosmic rays don’t quite reach the speed of light, that means the supernova was likely local.

“Iron-60 is made in supernovae, and it has a half-life of 2.6 million years, so that means there was a supernova not too long ago not too far away,” says Martin Israel, a professor of physics at Washington University and a co-author on the study.

Israel said the source is likely an OB association, a group of massive stars that tend to have short, eventful lives before ending with a giant bang. The iron nuclei were likely synthesized in one supernova before another star in the cluster produced a forceful explosion that accelerated these particles.

Unlike gamma rays, cosmic rays do not move in a singular direction. Instead, they push out in all directions. Part of the reason for this is because, as Israel points out, “ray” is a misnomer for cosmic rays, which are made of normal matter rather than high-energy photons. Thus, many supernovae produce cosmic rays made out of the stripped nuclei of nickel, cobalt, iron, and other heavier elements. Because they are a charged cloud of particles, other cosmic events can redirect them, making pinning down a point of origin difficult.

Israel and his co-authors determined that, due to the absence of certain other short-lived metal isotopes, the supernova had to occur at least 100,000 years, but likely less than 2 million years ago. Other studies of similar iron-60 particles found in the ocean crust, as published in Nature, and on lunar rocks, published in Physical Review Letters, corroborate this.

The observations would not have been possible, Israel says, had the ACE craft not been in continuous operation for more than a decade. The team was able to suss out evidence of iron-60 nuclei from other elements in the cosmic rays over time, in a process a bit like finding a needle in a haystack.

ACE launched in 1997, and plans specified a five-year mission studying charged particles 90 million miles from Earth. Israel said that his team’s discovery wouldn’t have been possible with the original mission duration, “but it’s still returning data 19 years after it was launched,” enough time to reveal the iron-60 evidence.

“It’s just remarkable that the spacecraft is working well and that this cosmic ray instrument is working so well after this long,” he said.

In the end, the study is another chapter in the canon of supernova research. It’s an important glimpse into how the universe formed.