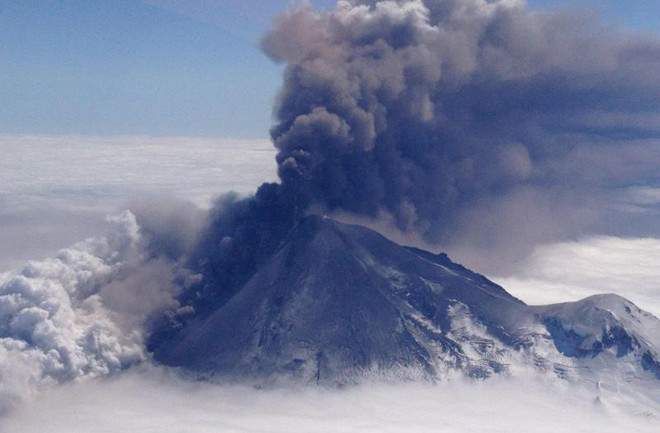 The explosive opening phase of the Pavlof eruption, seen on May 18, 2013. The current activity at Pavlof is likely very similar to what occurred during the first days of the eruption. Image: Brandon Wilson / AVO-USGS. The eruption at Pavlof in Alaska looks to be increasing over the past few days, according to the latest reports from the Alaska Volcano Observatory. Not since the eruption initually started has Pavlof produced ash plumes as impressive as the ones generated Tuesday and Wednesday, with estimates based on satellite imagery (which are somewhat obscured by clouds as well) and pilot observations of ~8.5 km (28,000 feet). Without clear views from the ground, it is hard to determine the exact nature of the eruption, but likely Pavlof is experiencing another bout of lava fountaining from the active crater, similar to the activity in early May. However, most terrestrial views have been obscured by clouds. The seismicity at Pavlof over the last 48 hours has been the most intense since the volcano rumbled back to like over almost two months ago, supporting the idea that the eruption has been reinvigorated into a new explosive phase. Ash fall has also been reported in communities to the southwest of Pavlof, including King Cove, 48 km (30 miles) distant. This betrays the importance of remote sensing when it comes to volcano monitoring. Without satellite observations and seismic stations, we would know very little about this eruption at Pavlof -- and it has caused some flight disruptions for airlines that service the Alaska Peninsula and Aleutians. So far, the winds have been blowing the ash out to sea rather than towards the Alaska mainland, however, if the winds were to change, more flights could see disruption as far inland as Anchorage. AVO posted some great backscatter electron microscope images of the ash collected from the earlier explosive activity from Pavlof (see below). These images show the mix of cuspate volcanic glass shards (ash) and some more rounded spatter (see middle of image below). The cuspate shape of the ash is due to the bursting bubbles that drove the explosive eruption, where the ash are the former parts of bubble walls, fragmented during the violent explosive. Some of the spatter is likely pieces of lava thrown violently out of the vent during the lava fountaining during the opening days of the eruption.