Would you be shocked to hear that the readership of general-circulation science magazines is overwhelmingly white, male, and middle-aged? Probably not. Of course, you might comfort yourself with the thought that lack of interest in such magazines is programmed into the DNA of women, young people, and non-Caucasians, despite evidence that the relevant genetic information is apparently evolving awfully rapidly. Would it surprise you to learn that overtly sexualized images of women cause tangible harm to adolescents and young women? Maybe it would. Not that there's anything wrong with sexy images of people of any gender in appropriate contexts, but in the actual context in which children grow up in our culture, the way in which these images appear enacts a vastly disproportionate toll on young girls. Are you at all taken aback by the cover of the latest catalogue for Edmund Optics, purveyor of scientific optical equipment? 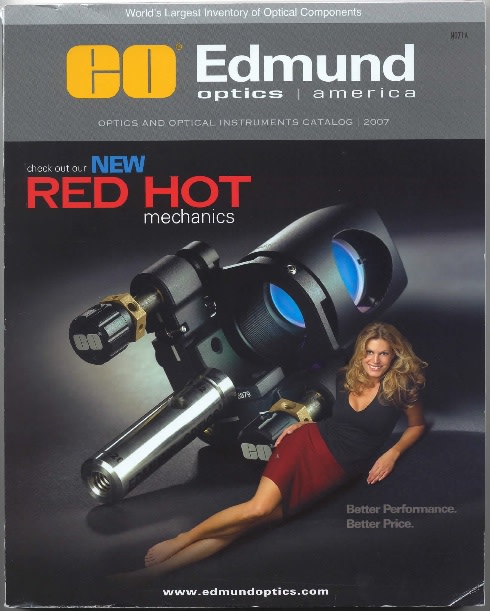 The same image appeared in ads in Physics Today. Which, by the way, is not a biker magazine. This sales pitch has caused a bit of consternation, including a lot of conversation on the AASWomen mailing list. But it's not just those uppity wymyn who are upset. Geoffrey Marcy of Berkeley has written to the company to complain:

Dear Mr. Radojkovic and Mr. Delfino and Mr. Dover, As representatives of Edmund Optics, I hope you will pass the following message to the appropriate management at Edmund Optics. I just saw the images from the Edmund Optics catalog that show a woman in a tight red skirt lounging next to some optical devices, some with the caption, "Red Hot". I hope Robert Edmund and the board of directors of Edmund can be alerted to this problem. As a scientist and professor at UC Berkeley I am embarrassed on behalf of the many female science students coming along. I wonder what message such images of sex objects in your ads send to bright young scientists of both genders. Moreover, after decades of overt discrimination against women in the physical sciences, including precluding their admission to the best universities and the denial of access to the world's best telescopes, your ad represents a setback. It reminds us of a dark era of clear discrimination against women, a time that I'm sure Edmund Optics hopes is long gone. If so, you have made a very serious error that insults the scientific community. As you can imagine, your ad has already generated extraordinary discussion in the scientific community, analogous to the discussion over the comments by Harvard's president who implied that women might not have what it takes to be great scientists. In short, your company has left open the question of your equal and unbiased treatment of women in your company and in your contracts. Sincerely, Geoffrey Marcy Professor of Astronomy, UC Berkeley Elected Member, United States National Academy of Sciences

To which Bill Dover at Edmund replied, in a classic example of "not getting it":

Hi Geoff, Thank you for your feedback regarding the EO catalog and our recent cover. No need to be embarrassed for the many female science students coming along. Rather, encourage them to celebrate that another smart, young, and attractive female has joined the ranks of women in a technical field, which breaks the pattern of discrimination you describe. You see, the woman featured on the cover is a six-year employee of Edmund and our Trade Show Manager and Spokesperson. Over the years we've received numerous positive comments and she has proven herself to possess the needed technical and social ability to successfully coordinate our tradeshows that showcase our products. The recent cover photo emphasized a new product launch by Edmund. Our Trade Show Manager coordinated the showcase of these products at Photonics West last month. Had you happened by our booth for a visit, you would have had the opportunity to meet and speak with her about our Kinematic mounts as well as receive additional technical information from two other smart, young, and attractive, female optical engineers present at the time. So that you know, this line of Kinematic Optical Mounts, Table Platforms, and Mechanical Accessories are technically situated to become the standard for optical positioning equipment in the marketplace. We are excited about the quality, features, and price of these products and know that they will be very difficult to compete with and we chose our Trade Show Manager to help commemorate their release. Professor Geoff, please encourage ALL of your female students to join the technical, engineering, and science ranks. There are too many that fall prey to the stereotypical concepts of what a person should look like or dress like which keep them from significant contributions in our society. That said, we value the opinions of our customers and we evaluate the feedback in developing our future strategies. I appreciate the time you have taken to mention your concerns here. I hope you will take the opportunity to encourage your female students to meet our female optical engineers at Edmund Optics. I think they, and you, will be impressed with their ability to support and represent woman [sic] in engineering. Best Regards, Bill

As far as I can tell, he's saying that "she" is smart (so smart that she doesn't need a name, apparently), so it's okay! This is America, so any talented and attractive young woman with an interest in engineering can grow up to be a Booth Babe. He forgot to mention that "Better Performance. Better Price." is the kind of slogan that any female should be proud to be associated with! Actually it's not okay. We're not going to see this any time soon:

A little parity goes a long way, though. I have a vision of the next catalog cover--it features a handsome young man, maybe in chinos or a nice pair of jeans, barefoot, shirt halfway unbuttoned, an alluring gleam in his eye. Maybe a caption like "Well Oiled Mounts."

And even if we did, it still wouldn't be okay. (Although it would be highly amusing.) These images don't appear in a vacuum; as long as the way that women and men are put on display in a wider cultural context remains dramatically imbalanced, a little equal-opportunity cheesecake here and there isn't going to fix things. Feel free to email Bill Dover (wdover-at-edmundoptics.com) and VP of Marketing Marisa Edmund (medmund-at-edmundoptics.com) to let them know what you think. (Thanks to Chaz Shapiro for the pointer.)