Need a refill on your cup of awesome today? As someone who spends a lot of time thinking about astronomy and the weird stuff that happens on a daily basis in space, I see a lot of amazing things. You'd think I'd get used to the awesomeness of astronomy, but the opposite is true: I'm always spellbound by what I find. Still, it takes a lot to seriously impress me, to really make me say Holy Frak. Well, astronomers have just announced that they have found a massive star that has been flung out of the cluster in which it was born. The star is huge -- 90 times the mass of the Sun -- and is screaming away from its nursery at 400,000 kilometers per hour. Holy Frak.

This incredible image is from the ESO's 2.2 meter telescope in Chile. It shows an overview of the sprawling 30 Doradus star-forming cloud, located about 180,000 light years away in the satellite galaxy to the Milky Way called the Large Magellanic Cloud (or the LMC to those in the know). In the center of 30 Dor sits a vast cluster of stars called R136. The total combined mass of all the stars in R136 is unclear, but it has several that tip the cosmic scale at 100 times the mass of the Sun, which is the upper limit of how big a star can get without tearing itself apart. The inset image is from Hubble, and shows the runaway star, named 30 Dor 016. It's been suspected for some time of being a cannonball blasting its way across space away from the cluster, but new observations have pretty much clinched it. They've also pinned the mass of this star to that whopping amount of 90 times the mass of the Sun. If you don't think that's a big deal, I'll note that this equals 180 octillion tons -- that's 180,000,000,000,000,000,000,000,000,000 tons, for those of you who have stock in the ASCII character for "0". Yeah. Holy Frak. The new observations, using Hubble's new ultraviolet camera called the Cosmic Origins Spectrograph, confirm that this is a single star (and not, say, a binary with two members each with 45 solar masses), making it one of the most massive stars ever seen. This kind of star is extremely rare! The UV observations also confirm that the star is plowing through the gas that lies in interstellar space in the LMC. You can get a good idea of what's going on in this closeup of the star: 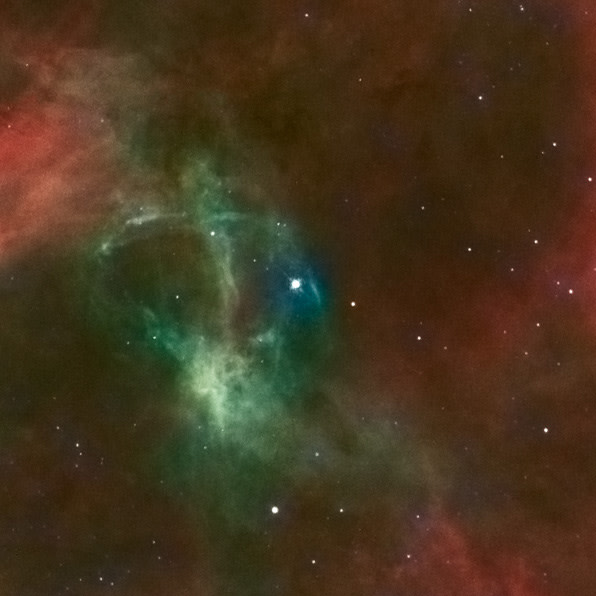 It's moving to the upper right in this image. You can see it's near the edge of a curved bubble of gas, with a sharp edge delineated to the right of the star. That edge is a bow shock, a vast supersonic shock wave formed when the fierce wind of subatomic particles emitted by the star --- a super solar wind - slams into the gas around it. If the star were just sitting there this bubble would be spherical with the star at the center. But you can see the bubble is actually elongated, and the star is near the edge. That's a sure sign we're looking at a star on the move. Amazingly, it appears that the star is 375 light years from the cluster! A star this massive can't live very long, a few million years at most. At 400,000 kph, it takes about a million years to travel that distance, so that fits. How the heck can you kick a star up to such incredible speeds? There are two ways we can think of: have it tossed around by the gravity of other stars in the cluster, or have it ejected when (if it's a binary star) its companion explodes as a supernova. For the latter supernova scenario, it's not the explosion that accelerates the star, it's the slingshot effect. The two stars orbit each other at high speed, and when one blows up it loses so much mass it can't hold onto the other star. Like an athlete spinning around for the hammer toss and then letting go, the star gets shot away at high speed. The thing is, the cluster itself is too young to have seen such a supernova a million years ago, when the star must have begun its flight. Plus, there's no indication of the type of a mess left by such an explosion. So the star must have been ejected when it reacted gravitationally to other stars. If you take three stars, say, and let them interact, the least massive one will get flung away. Take a few dozen and you get a beehive of activity, with several stars tossed out, some with very high speed. The thing is, this star has 90 times the Sun's mass! That means the stars left behind are even more massive... and we do see several stars in the cluster with masses as high as 100 - 120 times that of the Sun. Yeah again. Holy Frak. So let me explain... no, there is too much. Let me sum up. We have a stellar cluster with thousands of times the Sun's mass embedded in a nebula furiously cranking out newborn stars. A lot of them are near the physical upper limit of how big a star can get. The whole thing is only a couple of million years old, a fraction of the galaxy's lifespan. One beefy star with 90 times the Sun's mass got too close to some other stars, which summarily flung it out of the cluster at high speed, fast enough to cross the distance from the Earth to the Moon in an hour (it took Apollo three days). The star is barreling through the flotsam in that galaxy, its violent stellar wind carving out a bubble of gas that points right back to the scene of the crime, nearly 4 quadrillion kilometers and a million years behind it. Hmmm. Y'know, there are days I have a hard time getting out of bed. The humdrum routine of the day yawns ahead of me... but every now and again, as I lie there mustering up the courage to throw off the blanket and face the world, I get a glimmer that maybe today the Universe will once again refill my tank, make me look above and outside me, and remind me that truly, the place is full of awesome. Today was such a day. Image credit: Hubble: NASA, ESA, J. Walsh (ST-ECF) Acknowledgment: Z. Levay (STScI). ESO image: ESO Acknowledgments: J. Alves (Calar Alto, Spain), B. Vandame, and Y. Beletski (ESO), processing by B. Fosbury (ST-ECF).