Rainbow Federation: The 5 Most Diverse Crews in Space 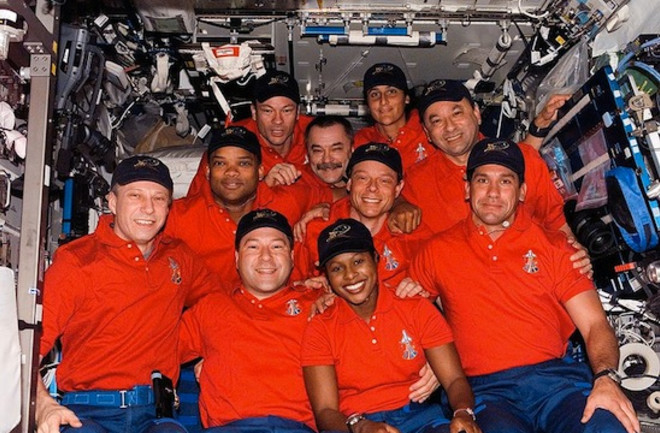 Once or twice before I've made a case for diversity as a hallmark of good science fiction. Regardless of one's present political affiliations, we like our sci-fi casts to be a plurality of uncanny and unfamiliar characters. The future of our species is, in part, dependent upon how well we get along with other forms of sentient life. So which stellar explorers would earn the stamp of approval from the Rainbow Coalition of the 24½th Century? After weeding out (most) all-human crews (sorry BSG!) and some of the less well-known teams (sorry Bucky O'Hare!), I've come up with a top five list. We've got genetic mutants, alcoholic robots, holograms, bisexual aliens, snarky A.I., clones, cryonauts, cyborgs, and every variant of human being imaginable. Did I leave anyone out? 5. The Space Shuttle Discovery Crew Mission STS-116 (pictured above) The only all-human (and real) crew on my list, the STS-116 mission broke all sorts of records, with two African-Americans, two women, two European Space Agency astronauts, and a Jewish-Korean American pilot. Normally I am loath to describe any group of people by their various identities, instead of their individual personalities and achievements, but in light of the homogeneous nature of the earlier space program and much of sci-fi, the fact that a crew this diverse already exists is wonderful. STS-116 is both an excellent sign we're moving in the right direction and a perfect first entry for this list. 4. Red Dwarf

A British comedy, Red Dwarf is about the misadventures of the remaining crew from the titular mining ship. Due to a radiation leak and an serendipitous bit of stasis, David Lister was awoken after 3 million years to discover he was the last person alive in the whole universe. The least diverse of the top five, the crew of the Red Dwarf is comprised of David Lister, the last (and most disgusting) human in the universe; Arnold Rimmer, a hologram of his former-self; Kryten, an anal-retentive, know-it-all android; Cat, a humanoid descendent of Lister's cat, has fangs, narcissism, and style like no one else; and finally, Holly. Sometimes male, sometimes female, always maintaining a stiff-upper lip, Holly is an A.I. that keeps things ostensibly running on the derelict ship. For a show that pretty much just has these five cast members, Red Dwarf makes the most of its motley crew. 3. Star Trek

The various and varied crews of the USS Enterprise and its sister ships in Star Fleet are too numerous to list, but the first crew set a new precedent for television. Kirk's crew, first introduced to Americans in 1966, had Uhura, Sulu, and Checkov on the main bridge, with Spock, an alien, as the first officer. Sadly, the original Star Trek is still a high-water mark for diversity on television, matched only by its successors, Star Trek: The Next Generation, Deep Space 9 and Voyager. Complementing the already ethnically diverse humans, notable crew members from each series include: Worf, the first Klingon in Star Fleet; Data, the first sentient android; Odo, a changeling; and Seven of Nine, a de-assimilated borg. In addition to these prominent non-humans, many members of each crew are at least partially cybernetic (Picard has an artificial heart, Jordi's trademark Chevy-grill visor), and, like Spock, many are half-human, half-alien. Roddenberry's commitment to unique cultures for each alien, as well as his preservation of many human ethnic traditions deep into the future, created a universe that set the gold standard for how a human future in space might be. 2. Futurama

Futurama is that perfect blend of homage, pastiche, and parody. Gene Roddenberry's future was a believable utopia; Matt Groening and David X. Cohen's future is a believable madhouse. The Planet Express crew does the Star Trek: Next Generation Crew a step better, having not just a robot (Bender) and an alien (Zoidberg), but also a cryonaut (Fry), a mutant (Leela), and a clone (Hubert Farnsworth). Throw in the recurring cast members of Lt. Kif Kroker, Lrrrr of Omicron Persei 8, Robot Nixon, celebrity heads in jars, and Nibbler and, well, it's hard to get more diverse than that. But they do. This season, the entire crew switched bodies and Bender bent his sexuality (again). That nearly every member of Planet Express has made out with or been to the "Lovenaisium" with another species, a robot, and/or changed genders is, I believe, a unique achievement. 1. Mass Effect

may be the most important new sci-fi story out there. Cliff Bleszinski calls it the "Star Wars for the next generation," and I'm inclined to agree. In the universe of Mass Effect, humans have only recently become an interstellar species. Not only are we relative newcomers to the intergalactic community, we don't even have a seat on the Council, which governs the dozens of races present in Mass Effect's universe. Unlike Red Dwarf, Star Trek, and Futurama, Mass Effect's entire narrative puts humans in the position of the minority. By the end of Mass Effect 2, Commander Shepard's crew on the Normandy consists of fifteen characters, the majority of which are non-human. If you play Mass Effect as a female Shepard (as you should), your crew by the last mission has eight female members and seven male members. Among the humans, one is a clone (Miranda), one is telekinetic (Jack), one is a cyborg (Shepard), and the pilot (Joker) is crippled by a disease. All the non-human crew mates (there are eight) are either a unique alien race (among nineteen options) or are synthetic life, including EDI (the ship A.I.) and Legion, a member of the Geth (a collective robotic species). Among the various species, skin color and body type are only the beginnings of their differences. Sexuality, gender representation, gender hierarchy, immuno-response, diet, life-span, intelligence, thought patterns, aggression, empathy, and genetic variety all differ from species to species. These fundamental biological differences are reflected in the total culture of each species as well as within the individuals on the crew of the Normandy, creating a staggering potpourri of characters that populate the universe of Mass Effect. As with all video games, the sense of immersion is even more intense than on a television series, which in turn makes the feeling of unity and loyalty to the crew unparalleled. The resulting effect is that you, the human, come to implicitly trust, care for, and even mourn beings that repulsed, angered, or horrified you. At the beginning of Mass Effect, you are a member of humanity. By the end of the second game, you are a citizen and hero of Council space, and see yourself linked to not merely your crew members, but the species and cultures they represent. Like Futurama, Mass Effect is a work in progress. As the series both continue, expect more new and strange permutations to push the boundaries of whom we consider "one of us."

Image of STS-116 crew via Wikipedia, Red Dwarf crew via Topless Robot, Futurama crew via Wired, and Mass Effect via the Mass Effect Wiki and my Photoshop skillz.