The images help astronomers better understand the history of star formation in our universe over billions of years. 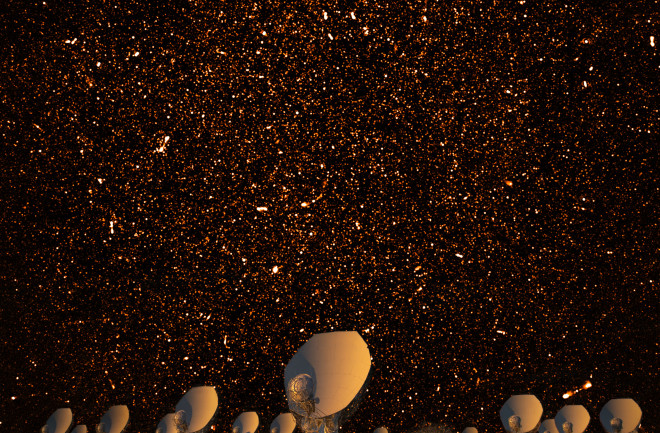 This composite image combines a photograph of the MeerKAT radio telescope array in South Africa and a map of thousands of distant star-forming galaxies whose radio emission MeerKAT captured. (Credit: SARAO; NRAO/AUI/NSF)

Most stars in the universe formed between 8 billion and 11 billion years ago, during an era astronomers have nicknamed "cosmic noon." By studying galaxies billions of light-years away, researchers hope to learn about star formation during that time.

Telescopes that see the universe in visible light — the kind we see with our naked eyes — can capture galaxies that far away. However, they can’t study their star-forming regions. Dust shrouds these stellar nurseries, blocking visible light from escaping and reaching Earth.

That's where radio telescopes come in. They can examine dusty, star-forming galaxies. But until now, there weren't powerful-enough radio telescopes to study distant galaxies as they looked during this era.

The South African Radio Astronomy Observatory’s MeerKAT telescope array changes that. It recently mapped radio emissions in an area of sky about the size of five full moons and revealed tens of thousands of star-forming galaxies that date to this period in our universe's history.

MeerKAT is a precursor to the Square Kilometre Array, a planned collection of thousands of radio dishes in Australia and Africa that will conduct a huge survey of the sky in radio wavelengths.

With images like these, astronomers hope to learn more about star formation over the history of the universe. From the MeerKAT image, astronomer are already finding that galaxies may have been forming even more stars than they previously thought, according to a press release from the National Radio Astronomy Observatory.