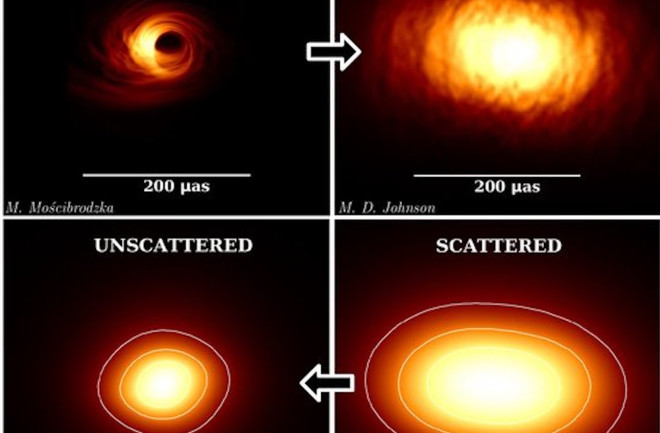 We’ve spent decades trying to decode our supermassive black hole, but crucial clues could’ve been in front of us all along.

Using an array of 13 radio telescopes, astronomers from the Max Planck Institute were able to home in on Sagittarius A* (pronounced A-star), the region that houses the Milky Way’s supermassive black hole. And once they’d cleared out the noise of scattered light that surrounds it, they found that the powerful radio emission that blasts from the black hole is coming from just a tiny area, which could be aimed right at Earth. The research was published Monday in The Astrophysical Journal and, if confirmed, could shed new light on Sgr A* and its radio jets.

Supermassive black holes are pretty common in our universe, sitting at the hearts of most large galaxies. Their strong gravitational fields allow them to suck in and obliterate objects that get too close to them. And while they absorb most of this celestial matter, a small fraction escapes the black hole and blasts back out into space. These emissions, known as jets, are carry abundant radio waves and travel at nearly the speed of light.

And even though we can detect some of Sgr A*’s radio emissions from Earth, studying it is easier said than done. There’s a cloud of hot gas that sits between Earth and Sgr A*. And this interstellar gas scatters the jets’ light, making it hard to pinpoint radio waves from the black hole.

But recently, a team of researchers were able to isolate this radio emission using very long baseline interferometry — a technique that combines multiple telescopes to create a massive, extremely powerful one. Using 13 radio telescopes from around the world, they removed the effects of the hot gas to get a sharper image of the jets’ emission than ever before.

They found that it’s coming from a symmetrical source, which lines up well with the “jet” theory, since they blast from black holes in opposite directions. They also discovered that the emission is much narrower than they thought. So narrow, in fact, that it’s coming at us from just one 300 millionth of a degree — suggesting that it’s aimed almost directly at Earth.

By luck of the draw, this means that we might have a direct view into one of our black hole’s defining characteristics. And don’t worry about the jet actually blasting us, because as far as we know, being in its line of sight doesn’t put us in any danger. If anything, it could allow us to study the jet in impeccable detail and shed light on Sgr A*’s mysterious nature.

Editor’s Note: An earlier version of this story incorrectly stated why light from Sagittarius A* was scattered before it reached Earth. It is scattered by interstellar gas.