Quest for the Higgs Boson Hits the Silver Screen

A Q&A with producer David Kaplan about the making of "Particle Fever," a behind-the-scenes documentary at the Large Hadron Collider. 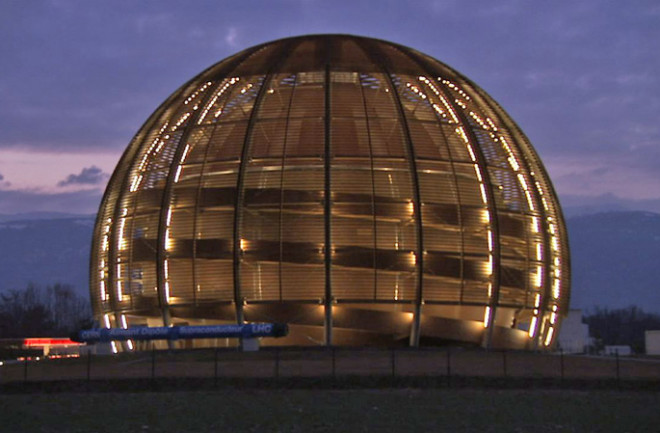 Under the dome: Much of the movie's action is set in CERN's Globe of Science and Innovation. | PF Productions

Particle Fever has all the trimmings of a Hollywood blockbuster: an epic quest, memorable characters, a tension-filled climax and a huge crash sequence. There’s also an ending that begs for a sequel. It’s got a romantic angle, too: The movie is, at its heart, a love story between physicists and the elusive truths they pursue.

The documentary takes viewers behind the scenes at the Large Hadron Collider (LHC) outside Geneva, Switzerland, from early test runs to the 2012 success of finding the Higgs boson. Fever handles the science nimbly, including perspectives of both theorists, who come up with ways to explain our universe, and experimentalists, who try to prove (or disprove) their ideas. But the movie’s greatest strength may be its human dimension. Following half a dozen scientists at different stages of their careers (and with different, often opposing viewpoints), Fever captures their personalities, their bickering and camaraderie, their dedication and, on occasion, well-earned jubilation.

After making the international film festival circuit in 2013, Particle Fever is getting wider release this spring. (Visit particlefever.com for the latest listings.) Producer David Kaplan, a physicist at Johns Hopkins University who conceived the film project and features prominently in it, talks with Discover’s Gemma Tarlach about bringing theories of the multiverse to your local multiplex.

Discover: How did you come up with the idea to make a movie about the LHC and the Higgs boson?

David Kaplan: I started out as a film major in college. But I decided film was too hard, so I switched to physics. I found it easier. [Laughs.] But I realized the Higgs experiment would revolutionize our field — or prove everything we’ve been doing might be worthless. Film was my most comfortable medium, so seven years ago I started taking cameras to presentations and talking to people like Sheldon Lee Glashow, a Nobel laureate in physics. I soon realized, however, that the film needed to be made with more technical proficiency.

Once you brought on director Mark Levinson, who also has a doctorate in particle physics, and acclaimed film editor Walter Murch, who took home Oscars for both Apocalypse Now and The English Patient, was your role in the movie strictly on-screen?

DK: I’m a physicist, but when it came to being in the editing room, I was there, guiding the scenes to be sure they were true to the events. We wanted to show the real-time experience of being a scientist and of being unsure of the future.

One of the most important things about this movie to me was that it was made by someone active on the cutting edge of physics, someone writing papers, responding directly to data, someone in it emotionally, with strong opinions and interacting with people in the community. I wanted it to really reflect the world as I knew it. I made the film because I wanted it to be made, not because I wanted to make it.

Why did you zero in on the hunt for the Higgs? Why not make a movie about, say, dark matter?

But with something like dark matter, we have an enormous amount of circumstantial evidence of a substance, not made of anything we know, dominating the universe, and in the simplest of theories, the LHC could be able to create it. Despite so much evidence for dark matter, we don’t know where or when it can be created.

And now that Higgs has been proven, is that the end of the story?

DK: No, not at all. There’s still more to learn. The Higgs doesn’t explain its own mass, or where the mechanism for it comes from in the first place, for example.

It’s fascinating to watch the drama at the LHC and the various research universities as events unfold. There’s a sense that every physicist on the planet was invested emotionally in finding the Higgs. What made the hunt so personal for so many?

DK: We’ve really gone without a major direct discovery of a new particle for many decades. Finding the Higgs gave everyone more confidence. Finding the Higgs was a massive relief: Thank God we got that stupid thing over with, now we can get on with deeper things. The Higgs was almost a burden because we usually don’t sit around and wait. The Higgs theories were first written in the early ’60s. Theory doesn’t take 30 or 40 years. But progress is extremely slow on the experimentalist side, partly because these experiments are extremely hard to do, but also for sociopolitical reasons. Our field is still getting over post-traumatic stress from the cancellation of the Supercollider [a planned particle accelerator in Texas that would have been larger than the LHC but was shelved in 1993].

What’s next for you? Are you tempted to go Hollywood?

DK: Personally, I think I’ve still got some physics in me. I’m happy to consult now with people on their film projects, but I’d like to spend the vast majority of my time doing physics. I’m on the edge between theory and experiment. There’s a place for theorists to think very creatively about possible experiments that might find things other experiments have missed. That’s the realm I want to think in.