Quasars, the distant galaxies with active supermassive black holes at their centers, may be linked to the origins of ultrahigh-energy cosmic rays. 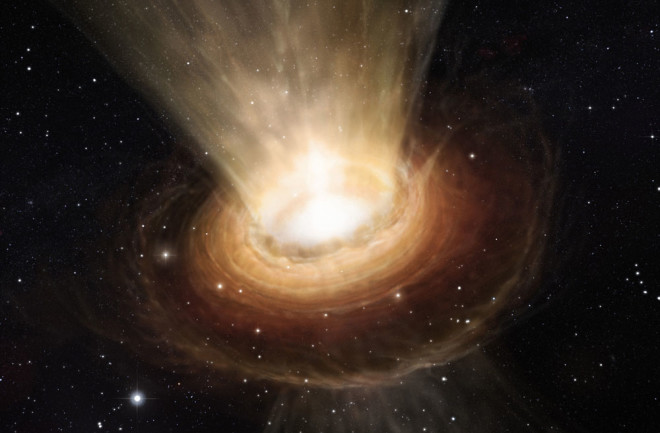 Black holes, such as the one in galaxy NGC 3783 illustrated above, are some of nature’s most prodigious spewers of energy. Could that energy be enough to account for a long-standing mystery? ESO/M. Kornmesser

Gaze up at the sky on a clear night, far from the city lights, and you might see the moon and some stars, a few planets and maybe even the fuzzy glow of the Milky Way. “In between, there seems to be nothing but emptiness and darkness,” says Xiawei Wang, an astronomy graduate student at Harvard University. “At least that was our view of the cosmos until 50 or so years ago when astronomers realized that space was not as empty as we once thought.”

In 1964, astronomers were surprised to discover a uniform sea of radiation coming from all directions, all the time. Later dubbed the cosmic microwave background (CMB), this low-energy light turned out to be the residual radiation from the Big Bang itself, cooled during its journey over the past 13.8 billion years. Studying the CMB has led to tremendous insights about the structure and composition of our universe, its exact age and even its shape.

In the decades since, astronomers have learned there’s much more to the unseen universe, finding background radiation at practically every wavelength observed. The highest frequency and most energetic background signals they’ve found are made up of a form of light called gamma rays, plus exotic particles called neutrinos and cosmic rays. And, unlike the CMB, the source of these emissions is still enigmatic. No one knows where they come from.

In three recent papers, Wang and her adviser, Harvard astronomer Avi Loeb, advanced a new idea that suggests not one source for this high-energy background, but literally billions.

It all comes down to a phenomenon called quasar outflows.

Initially discovered as unexplained signals picked up by Arno Penzias and Robert Wilson at Bell Laboratories (above), the cosmic microwave background (below) — the universe’s oldest light — is now mapped with incredible accuracy.

A Chorus of Quasars

Quasars are among the most luminous objects in the universe. Each one greatly outshines the combined output of all the stars in their host galaxies. (For instance, in 2015 astronomers announced they’d found a quasar that shines some 400 trillion times brighter than our sun.)

All large galaxies have giant black holes at their centers, and a quasar forms when one actively starts feeding, pulling in matter like gas and dust. But this stuff doesn’t fall directly into the black hole — it circles around the abyss at ever-increasing speeds while spiraling inward. Eventually, the cosmic food becomes so hot (from friction) that it pours out light before some of it makes its way into the black hole. The object that generates this prodigious amount of light — the black hole and cloud of debris swirling around it — is a quasar.

But a black hole doesn’t eat everything in sight; its mouth is simply not big enough. Some of the surrounding material gets ejected in different ways. Ten percent of known quasars shoot out matter — at more than 99 percent of the speed of light — through a pair of spectacular jets.

Astronomers seeking a source for that exotic, high-energy radiation took a close look at these powerful jets. But observations showed they weren’t enough: All the universe’s quasar jets could account for only about half the gamma rays, and none of the neutrinos and cosmic rays.

The unexplained emissions, according to Wang and Loeb, may stem from a more subtle feature of every quasar: their milder but steadier outflows. What a black hole doesn’t eat, or shoot away in jets, it flings off at relatively moderate speeds — a few thousand miles per second, or about 1 percent the speed of light. After interacting with the local gas, these outflows can ultimately produce small amounts of all three components of the high-energy background: gamma rays, neutrinos and cosmic rays.

Individual outflows don’t release enough energy for us to notice, which is why no one really considered them before — but a big enough number of them would add up. And in Wang and Loeb’s scenario, the process is taking place at every quasar in the universe. A little energy times a lot of sources could, in theory, produce all that mysterious energy.

Wang and Loeb set out to see if the numbers backed up their premise. In 2015, they started by focusing on gamma rays. Step one was trying to determine the tiny amount coming from each source. It wasn’t easy. They had to approach the problem theoretically because the emissions from an individual quasar are actually too weak for direct measurements. Drawing upon emissions in other wavelengths that they could observe for guidance, Wang and Loeb eventually came up with an estimate.

The next step was to factor in contributions from the billions of quasars in our universe to figure out the total gamma-ray signal from all quasar outflows. This calculation was also complex, incorporating estimates of the total number of quasars, their general distribution in the sky and the range in observed brightness. (Brighter quasars emit more gamma rays.) In the end, the total value Wang and Loeb arrived at, miraculously, was about half the gamma-ray background signal — perhaps comprising the “missing” half quasar jets could not explain.

Encouraged, they repeated this exercise in late 2016 and early 2017 for neutrinos, and then cosmic rays. In both cases, their tallied sums closely matched experimentally obtained values for the neutrino and cosmic-ray backgrounds. The numbers could work, suggesting they might have found the answer to the high-energy background problem.

Unfortunately, the idea remains hypothetical until astronomers can get direct measurements of all three forms of radiation coming from a single quasar outflow. Luckily, more sensitive instruments for detecting gamma rays, neutrinos and cosmic rays are in the works.

If their quasar outflow idea is ultimately confirmed, it would do more than just clarify a long-standing astronomical puzzle. “It would be another step toward answering the question of what’s out there in the universe and where it comes from,” says Wang. “Sometimes, the answers to the biggest questions in science lie in small and subtle things. These less visible entities are often neglected, but in the aggregate, they can be brighter and more powerful.”

She compares the situation to a piano concerto. The piano is loud enough to drown out any of the dozens of individual string instruments in a full orchestra. But when you put all the strings together, their contribution is substantial. In the same way, the cumulative output of quasar outflows could make a difference on a cosmic scale.

So the next time you look at the night sky, “remember that what we see with the naked eye is a tiny, tiny fraction of the things happening in the cosmos,” says Wang. Appreciating the piano concerto of the universe involves learning to hear all the instruments, no matter how faint and unimportant they might seem.