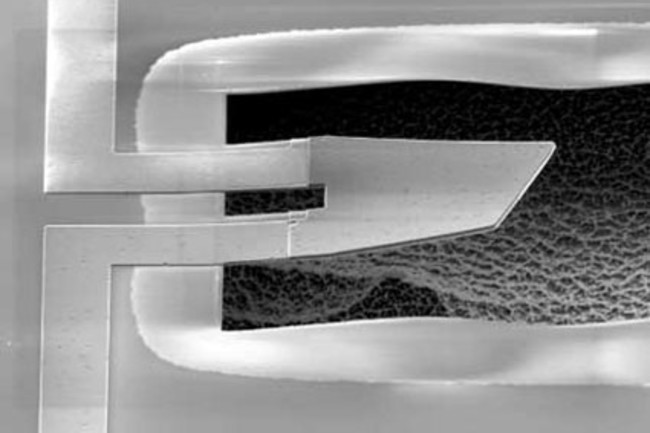 Only the tiny bits of matter, atoms and molecules, have even been observed in a quantum state—until now. In a study in this week's Nature, physicists report that they've put the largest object ever into that state where the weird rules of quantum mechanics apply, and things can be in two places at once. Research leader Andrew Cleland says:

"There is this question of where the dividing line is between the quantum world and the classical world we know. We know perfectly well that things are not in two places at the same time in our everyday experience, but this fundamental theory of physics says that they can be" [BBC News]

. The researchers' "quantum resonator," seen here, is a vibrating device that measures only in micrometers, but that's large enough for us to see it with a little help from a scanning electron microscope. To see quantum mechanics in action, scientists try to put an object into its ground state, the point when no more energy can be removed from the system. Then they add a quantum of energy back in, which can oscillate between locations.

Although only one quantum of energy is put in, any measurements will show either zero or one quanta; strictly, the atom has both [BBC News]

. Doing this, however, requires ultra-low temperatures near absolute zero.

Unfortunately, the ground state temperature is related to the vibrational frequency. To reach it, you either need to reach temperatures below those possible with current refrigeration methods, or have something that can vibrate incredibly quickly [Ars Technica]

. Unable to reach the 50 billionths of a degree Kelvin they thought would be necessary, the researchers went the other way. They crafted this device to vibrate at 6 billion times per second, which meant they could get by with slightly warmer temperature. Once the system reached ground state, the team created a phonon, a minuscule unit of vibrating energy. And in aluminum nitride layered between two aluminum electrodes, the team observed quantum behavior—the system was in a superpostion of states, simultaneously having both zero and one quanta of energy. Cleland's find could be another step toward quantum computing. But for those more interested in mind puzzles than practicality, this line of research could

test predictions about “Schrödinger cat” states — named for a hypothetical feline simultaneously alive and dead — in which a system exists in a mix of states known as a superposition. Cleland’s team showed, somewhat indirectly, that a form of superposition existed inside their resonator [Science News]