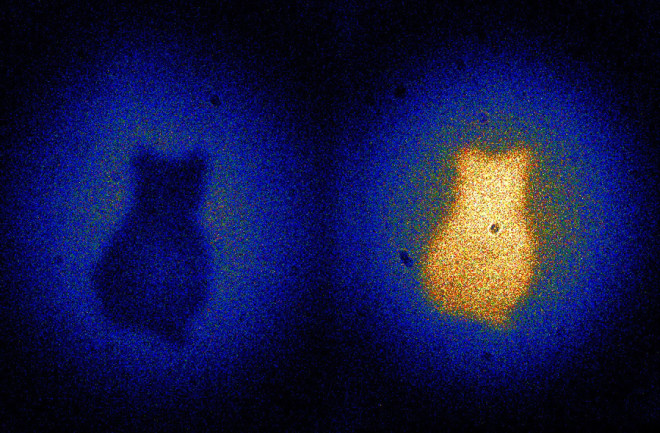 Images of a cat-shaped cutout created by photons that, due to quantum entanglement, didn't go through the cat cutout. | Gabriela Barreto Lemos

In a dark lab in Vienna, physicists did something incredible: They shined a laser through a cat-shaped hole in some cardboard, resulting in a glowing, red feline image. The twist: The light in the image didn’t go through the hole in the cardboard.

The work, published in August, started with a single beam of light. To create a typical image, the entire beam would shine on the cardboard hole. Some light particles, or photons, would pass through, making up an image. The other photons would be blocked.

This time, the physicists took advantage of a weird quantum process called entanglement. Entangled photons are fundamentally linked, carrying some of the same information about each other even after they’re separated. Think twins with ESP. “Spooky action at a distance,” according to Albert Einstein.

After shining the light beam through a crystal to entangle the photons, the physicists split the beam in two, letting half of each entangled pair pass though the cat cutout. The other half traveled to a detector — a special camera — carrying the cat-shaped information from their twins’ journeys.

“I didn’t expect the images to come out so well,” says physicist Gabriela Lemos, the lead author of the paper.

Interestingly, the twin photons weren’t totally identical. The unobserved photons that went through the cat-shaped hole were too low in energy to be visible, while the detected twins were high-energy and visible. The team hopes others can use this unique property to image objects, such as delicate biological samples, that a more energetic, visible beam might otherwise destroy.