Quantum Cryptography Takes a Step Towards Mainstream Use 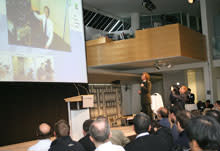 Encryption systems that rely on the "spooky" properties of quantum mechanics have long been hyped as the ultimate in spy- and hack-proof communication, and recently governments and large companies have begun sampling early examples of the technology. Now, scientists in Vienna have demonstrated a commercial telecommunications network protected by quantum cryptography, and say the system could be generally available in less than 10 years. One of the researchers who worked out the basic idea behind quantum cryptography 25 years ago, Gilles Brassard, was on hand in Vienna to explain the mechanism.

"All quantum security schemes are based on the Heisenberg Uncertainty Principle, on the fact that you cannot measure quantum information without disturbing it," he explained. "Because of that, one can have a communications channel between two users on which it's impossible to eavesdrop without creating a disturbance. An eavesdropper would create a mark on it. That was the key idea" [BBC News].

Researchers showed off the network at a conference that marked the completion of the European Union project known as SECOQC (Development of a Global Network for Secure Communication Based on Quantum Cryptography), which aimed to get the technology ready for modern business applications. In the network, researchers had linked six locations throughout Vienna and a neighboring town with standard fiber optic cables. They sent photons, the subatomic particles of light, racing through the cables, and sensitive light detectors at each location then derive a "quantum key" from the pattern of arriving photons. The team demonstrated a videoconference in which the quantum key, the piece of information that would be interfered with by eavesdropping, was frequently refreshed. When

an intruder did try to listen in on the quantum exchange, photons became scrambled, and a rise in the error rate at the ... detectors signalled the attack. The system automatically shut down without being compromised [BBC News].

Other researchers at the conference had other ideas about how this technology could be put to use in the real world, with some suggesting that quantum keys could be used to prevent thieves from using stolen credit card information for internet purchases.

The idea is that we would fill up our mobile phones or similar handheld devices with secrets (random strings of digits) at a quantum ATM. During online transactions, we would gradually consume this personal stash of secrets to encrypt information, such as our Pin, or to authenticate ourselves. "The quantum part gives you the promise that when you've topped up your secrets, only you and your service provider own this particular random digit string," says Tim Spiller of HP. "If you're doing an internet transaction, you send the merchant however many secret bits is deemed to be secure. The merchant sends them on to Visa, say, who checks they're OK and if so authenticates the transaction" [The Guardian].