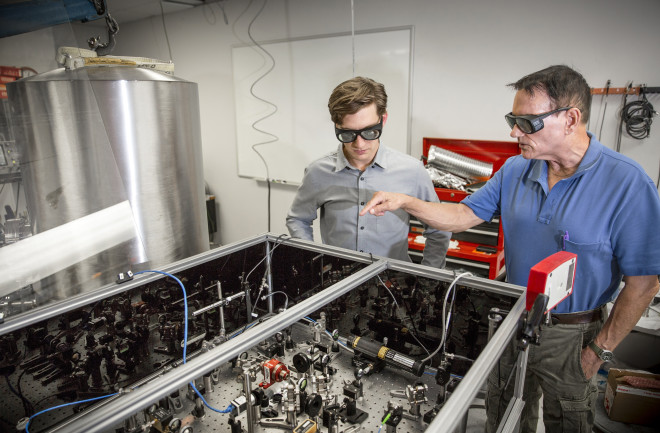 The subtext: We are venturing into an age of quantum supremacy — the point at which quantum computers outperform the best classical supercomputers in solving a well-defined problem.

Engineers test the accuracy of quantum computing chips by using them to solve a problem, and then verifying the work with a classical machine. But in early 2019, that process became problematic, reported Neven, who runs Google’s Quantum Artificial Intelligence Lab. Google’s quantum chip was improving so quickly that his group had to commandeer increasingly large computers — and then clusters of computers — to check its work. It’s become clear that eventually,  they’ll run out of machines.

Case in point: Google announced in October that its 53-qubit quantum processor had needed only 200 seconds to complete a problem that would have required 10,000 years on a supercomputer.

Neven’s group observed a “double exponential” growth rate in the chip’s computing power over a few months. Plain old exponential growth is already really fast: It means that from one step to the next, the value of something multiplies. Bacterial growth can be exponential if the number of organisms doubles during an observed time interval. So can computing power of classical computers under Moore’s Law, the idea that it doubles roughly every year or two. But under double exponential growth, the exponents have exponents. That makes a world of difference: Instead of a progression from 2 to 4 to 8 to 16 to 32 bacteria, for example, a double-exponentially growing colony in the same time would grow from 2 to 4 to 16 to 256 to 65,536.

Neven credits the growth rate to two factors: the predicted way that quantum computers improve on the computational power of classical ones, and quick improvement of quantum chips themselves. Some began referring to this growth rate as “Neven’s Law.” Some theorists say such growth was unavoidable.

We talked to Dowling (who suggests a more fitting moniker: the “Dowling-Neven Law”) about double exponential growth, his prediction and his underappreciated Beer Theory of Quantum Mechanics.

Q: You saw double exponential growth on the horizon long before it showed up in a lab. How?

A: Anytime there’s a new technology, if it is worthwhile, eventually it kicks into exponential growth in something. We see this with the internet, we saw this with classical computers. You eventually hit a point where all of the engineers figure out how to make this work, miniaturize it and then you suddenly run into exponential growth in terms of the hardware. If it doesn’t happen, that hardware falls off the face of the Earth as a nonviable technology.

Q: So you weren’t surprised to see Google’s chip improving so quickly?

A: I’m only surprised that it happened earlier than I expected. In my book, I said within the next 50 to 80 years. I guessed a little too conservatively.

Q: You’re a theoretical physicist. Are you typically conservative in your predictions?

People say I’m fracking nuts when I publish this stuff. I like to think that I’m the crazy guy that always makes the least conservative prediction. I thought this was far-out wacky stuff, and I was making the most outrageous prediction. That’s why it’s taking everybody by surprise. Nobody expected double exponential growth in processing power to happen this soon.

Q: Given that quantum chips are getting so fast, can I buy my own quantum computer now?

A: Most of the people think the quantum computer is a solved problem. That we can just wait, and Google will sell you one that can do whatever you want. But no. We’re in the [prototype] era. The number of qubits is doubling every six months, but the qubits are not perfect. They fail a lot and have imperfections and so forth. But Intel and Google and IBM aren’t going to wait for perfect qubits. The people who made the [first computers] didn’t say, “We’re going to stop making bigger computers until we figure out how to make perfect vacuum tubes.”

Q: What’s the big deal about doing problems with quantum mechanics instead of classical physics?

A: If you have 32 qubits, it’s like you have 232 parallel universes that are working on parts of your computation. Or like you have a parallel processor with 232 processors. But you only pay the electric bill in our universe.

Q: Quantum mechanics gets really difficult, really fast. How do you deal with that?

[This story originally appeared in print as "The Rules of the Road to Quantum Supremacy."]