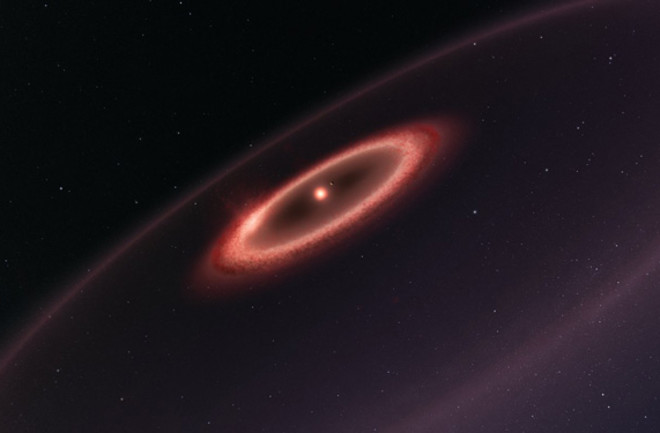 An artist’s impression of the dust belts around Proxima Centauri. (Credit: ESO) Our nearest neighboring star just got a whole lot richer as a system—and a whole lot weirder. In research published today in the Astrophysical Journal Letters, researchers from the European Southern Observatory announced … quite a few things, really. The biggest and brightest—literally—of their discoveries is a ring of icy dust around our nearest star, Proxima Centauri, that’s sort of like that system’s version of the Kuiper Belt. The Kuiper Belt is a circumstellar disc of material that envelopes the solar system's planets. The belt contains rocks and ices left over from the formation of the solar system's planets, and also includes dwarf planets like Pluto. But Proxima Centauri is a star that's much smaller than the Sun, so its dust belt sits much closer, about 1 to 4 times the distance of the Earth to the Sun (called an astronomical unit or AU in space parlance). And when you spot these kinds of belts around stars, it's often a strong indication of planetary formation. “[I]n my opinion what we found in Proxima Centauri suggests an elaborate system that might be harboring several planets,” Mayra Osorio of the Instituto de Astrofísica de Andalucía and a coauthor on the paper says. This includes Proxima b, the Earth-sized exoplanet discovered in the Proxima Centauri system in August 2016. There's also been a second tentative detection within a few million kilometers of that planet, and circumstantial evidence for a Saturn-mass planet—a thermal “blob” about 1.6 AU from the star. This larger object could be a ringed planet with 100 times the mass of the Earth, though this is listed as only an outside possibility.

This image of the sky around the bright star Alpha Centauri AB also shows the much fainter red dwarf star, Proxima Centauri, the closest star to the Solar System. The picture was created from pictures forming part of the Digitized Sky Survey 2. The blue halo around Alpha Centauri AB is an artifact of the photographic process, the star is really pale yellow in color like the Sun. (Credit: ESO) This gas giant, if it indeed exists, could be responsible for shepherding this belt into place. One problem, though, is that Proxima is currently subject to intensive amounts of study through a planetary system-hunting program called RedDots, which monitors three nearby “red dwarf” stars including Proxima. Studies from this collaboration have never revealed the signature of such a massive planet around the star. “Our ALMA data reveal also an intriguing faint compact source at a distance less than 2 Astronomical Units from the star and that could be interpreted as a ring of dust surrounding a giant planet 100 times more massive than the Earth,” Itziar de Gregorio-Monsolvo, another coauthor and a program manager at ALMA says. There’s also the matter of another mysterious tentative detection. Somewhere, roughly 30 AU from Proxima, is another cold belt of material. That’s equivalent to Neptune’s distance, but because of Proxima’s small size, this ring of material has no real equivalent in our solar system. As Osorio points out, the Oort Cloud of comets in the far outer reaches of our solar system is too diffuse, meaning there’s almost another ring of planetesimals out there — maybe. Unlike the 1 to 4 AU ring, this one has only circumstantial evidence. Guillem Anglada, lead author of the study and a researcher at Instituto de Astrofísica de Andalucía , says, that the evidence is “weak and additional data are required for a full confirmation.” Another bit of circumstantial evidence involves a hot inner ring about 0.4 AU from Proxima. Little is known about it, but it’s far less massive than either belt described in the paper. It’s all a lot to take in. But these various bits of information are indicate Proxima Centauri is not just a star with one or two lonely planets, but one that’s strange and dynamic, and might have many more planets and two or more belts of debris from the early days of its stellar system. “To observe outside of our own solar system the presence of a debris disk during the nominal main sequence lifetime of the star is what's honestly most interesting to me,” Sarah Ballard, an astronomer at MIT who was not involved in the study, says. “Like in a jigsaw puzzle of a city skyline, we seem to have done all the easiest parts—the buildings and trees and stuff. What remains are the harder parts, the clouds or the ocean parts of the puzzle, with each painstaking piece linked only with great effort and care to the picture we've created so far.” There’s more work to be done, and this isn’t just proving or disproving the gas giant, or providing further evidence for the distant outer belt. The researchers also need to work on figuring out if there are more planets filling in the cracks of these new discoveries, and finding out why such an old system—5 billion years—has a debris disk in the first place, as those are typically associated with far older dead stars or very new ones. ALMA’s data gave us a many cool discoveries—alongside quite a few deepening mysteries. The bigger task of solving those mysteries and building a more cohesive picture of this system is now underway.