Primordial Black Holes Could Solve Major Mysteries — If They Exist

Theories state that some black holes could have formed within the first second of the Big Bang. 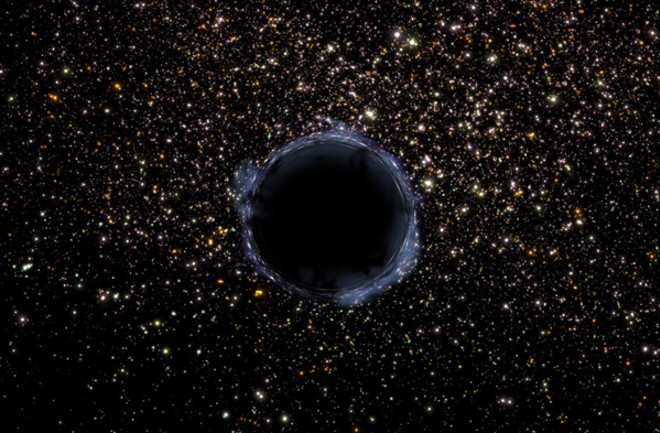 An artist’s illustration of a black hole. (Credit: NASA/ESA and G. Bacon, STScI)

All the black holes that astronomers have seen fall into one of three categories: stellar-mass black holes, intermediate-mass black holes, and supermassive black holes. Each is more massive than our Sun and formed at least hundreds of thousands of years after the Big Bang, as our universe grew and evolved.

But there is another type of black hole astronomers haven’t yet seen, but think could exist. These are primordial black holes.

As their name suggests, primordial black holes were born very early in the life of the universe, a mere fraction of a second after the Big Bang. It was a time long before stars or galaxies (and other types of black holes) could exist. But some theories predict that primordial black holes should have popped onto the scene anyway. That’s because in that fraction of a second after the universe itself began, space was not completely homogenous (the same at every point). Instead, some areas were denser and hotter than others, and these dense regions could have collapsed into black holes.

The idea of such tiny black holes intrigued astrophysicist Stephen Hawking, who explored their quantum mechanical properties. That work led to his 1974 discovery that black holes can evaporate over time. And while Hawking ultimately realized a large black hole would evaporate away in more time than the universe has been around so far, small black holes could have indeed evaporated away or currently be doing so, depending on their mass. Hawking calculated that any primordial black hole with a mass greater than 1012 pounds ([1012 kilograms]; that’s far less than the mass of any planet, dwarf planet, and most named asteroids and comets in our solar system) could still be around today, while those less massive would have already disappeared.

And depending on their mass (which, remember, depends on when they formed), any primordial black holes left today could neatly explain some of the outstanding problems in astronomy.

Galaxies including the Milky way (left) and Andromeda have large halos of dark matter (gray) extending far past their visible stars and dust. If primordial black holes are a form of dark matter called MACHOs, they could reside in these halos. (Credit: Kavli IPMU)

One such problem is dark matter. Although it makes up about 30 percent of our universe, astronomers remain stumped as to what exactly dark matter is. Primordial black holes could be the answer — or, at least, part of it. Primordial black holes could be a type of dark matter called MACHOs, which stands for massive compact halo objects, because astronomers think they’re found in the halos, or outskirts, of galaxies. Such black holes would be difficult to see if they’re simply floating quietly in space and keeping to themselves.

One way to spot MACHOs is by looking for events called microlensing, which occur when a massive object (say, a black hole) passes in front of a more distant object, like a star or galaxy. The black hole bends the light from the distant source around it, brightening and magnifying the image. These events are infrequent and short lived, but catching enough of them could allow astronomers to determine what the objects doing the microlensing are and whether they could be primordial black holes.

However, several recent studies have determined that even if primordial black holes of this type exist, they probably can’t explain all or even most of the dark matter effects we see.

Another way to search for large primordial black holes is through mergers. Gravitational-wave observatories like LIGO and VIRGO have already seen several black hole mergers, and future projects like LISA will be detect mergers of different masses than the ones we can currently spot. Because astronomers can trace back the masses of the merging black holes, they could find that future events were caused by black holes with the right masses to make them primordial black holes.

Alternatively, primordial black holes could be tiny. Some theories hold that although black holes evaporate, there may be a size limit. So when an evaporating black hole reaches a certain mass, it stops evaporating and simply stays very small. If this is the case, primordial black holes could still account for dark matter, albeit in a different way, and searching them out would be more challenging. Perhaps astronomers could spot black holes that are still evaporating, which would give off energetic particles, which in turn give off gamma rays. If black holes do eventually pop out of existence without stopping, they could die in intense blasts of energy — equivalent to about one million 1-megaton hydrogen bombs, Hawking wrote — which we might also spot as bursts of gamma rays.

This possibility, however, may also not be likely, because primordial black holes had to form by the time the universe was just 1 second old. Even primordial black holes that formed at the last possible instant possible would be, according to the physics, only about 100,000 times as massive as the Sun, which is not really in the supermassive black hole weight class. To get the even larger black holes we see today, they’d have to pull in a lot of material and grow very quickly. This isn’t impossible, but it may be less likely to explain the sheer number of supermassive black holes that exist today.

Regardless of where or how they’re found, primordial black holes could tell astronomers a lot about the universe we live in. Depending on their mass, they could serve as probes into galaxy evolution, high-energy physics, and even the earliest fractions of a second after the universe was birthed. But although primordial black holes could exist, they have yet to be seen, and currently remain one of astronomy’s great questions, rather than a tidy answer.