Praying away the oil leak

A man in Boulder -- yes, my home town -- is trying to meditate the oil leak away. His idea?

"The basic concept is to try and get as many people to visualize that the valve is actually functioning and is working and closing."

This is part of the Intention Experiment, what is basically telekinesis:

Lynne McTaggart, who started the Intention Experiment, has organized more than a half dozen mind-over-matter experiments -- most recently to try to improve the water quality in Lake Biwa, Japan -- that involve people focusing their thoughts on something in the physical world to make change. She claims to have scientific evidence that it works. 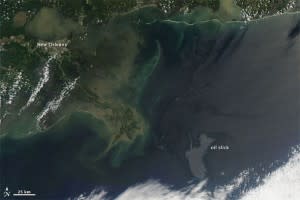 Look, we've seen this before. People have prayed for rain, and tried to pray the stock market into obedience. These efforts fail, always. Or at best they might coincidentally align with some event, but it's never clear in advance just what event they were aiming at (making it easy for them to claim success after the fact). I know that people who believe in this sort of thing have their heart in the right place. I'm frustrated by horrific events like the oil leak too, and I wish I could do something tangible. But trying to pray it away won't work. One believer said this:

"I completely understand that most people would have a healthy skepticism about these things," said Jahnavi Stenflo, also of Boulder, in an e-mail. "To all those skeptics, I would simply ask them to participate in the exercise if they would like to try. ... Ultimately, there is nothing to lose in trying to visualize the valve shutting off. It either will help or it will not."

These "What's the Harm?" arguments are extremely misleading. Of course there is something to lose. This kind of thing has been tested over and again, and shown to be a waste of time. The time spent by the participants is one obvious thing lost. But more than that, what we lose when we do things like this is our ability to separate fantasy from reality. And we do know quite a bit about human behavior: people who will try to meditate the oil leak away will almost certainly not conclude meditation doesn't work when it fails. Instead they'll find excuses why it didn't work, and try it again next time something happens. The more we wish for something to be true, the more we must hold it up to scrutiny lest we fool ourselves. I am not saying things like this shouldn't be tested. The point is, they already have been. Repeatedly. And they never work. If this oil leak is to be stopped, it'll have to be done using engineering, using science, using actual physical work. And at the moment there's not much you or I or anyone outside of the engineers at BP can do to help. However, I'll add that thinking about the problem is important. When the root causes of the leak are found -- and I don't mean the physical problems, but what failures allowed the situation to arise in the first place, both in the company and in the political environment -- we need to make sure that it doesn't happen again. That means keeping up with the news, being aware of the situation, and contacting politicians so that they hear our voices about it. That is where thinking makes a difference.