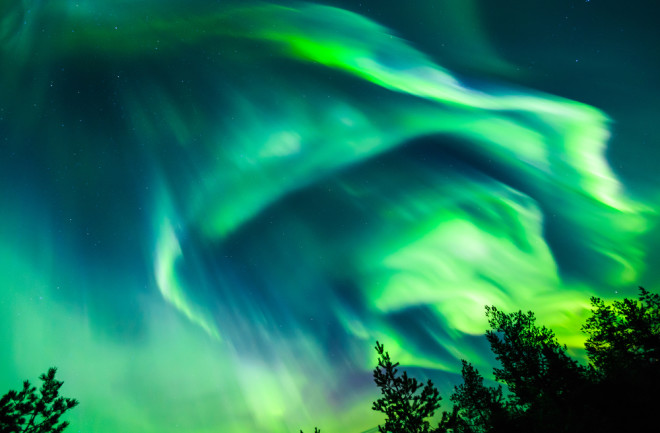 (Credit: Petri jauhiainen/Shutterstock) If you go outside tonight and look up, you could witness the dazzling effects of some particularly stormy celestial weather. The Space Weather Prediction Center at NOAA issued an alert this morning warning of a "Strong" geomagnetic storm buffering the upper regions of our atmosphere. The resultant wave of charged electrons could trigger alarms on some power systems in high latitudes and throw off satellite navigation systems, but the most visible effect should be the presence of magnificent auroras reaching down into the continental United States. The storm began around 10 a.m. Eastern time, and should continue for another few hours. The storm is the result of an uncommonly large hole in the sun's corona, which ejects a high-velocity stream of electrons into space. When the Earth's orbit takes it through this stellar wind, the particles interact with our magnetic field creating the fiery light display we call the Northern Lights. The current event is labeled a G3 or "Strong" geomagnetic storm, on a scale that runs up to 5. Such events occur several times a year. During similar storms, auroras have been seen as low as Illinois and Oregon, according to the NOAA, and residents on a level with Pennsylvania and Iowa and blessed with a clear sky may be able to catch a glimpse of the heavenly light show tonight. The storm is predicted to last until around 2 p.m. Eastern today, but the auroras could continue well into the night. Those on the other side of the globe have already begun to catch glimpses of the aurora as the storm intensifies. The auroras should peak in North American just before dawn.

Finally clear skies! Got a glimpse of a weak aurora. #Kiruna@VirtualAstro@Photo_Spacepic.twitter.com/jQsSMWpqEc