That isn't just a lot of splattered paint on those canvases, it's good mathematics

In 1949, when Life magazine asked if Jackson Pollock was "the greatest living painter in the United States," the resulting outcry voiced nearly half a century of popular frustration with abstract art. Some said their splatter boards were better than Pollock's work. Others said that a trained chimpanzee could do just as well. A Pollock painting, one critic complained, is like "a mop of tangled hair I have an irresistible urge to comb out."  Yet Pollock's reputation has outlived his detractors. A retrospective of his work several years ago at the Museum of Modern Art in New York City drew lines around the block, and an award-winning film of his life and art was released at the end of 2000. Apparently "Jack the Dripper" captured some aesthetic dimension—some abiding logic in human perception—beyond the scope of his critics. That logic, says physicist and art historian Richard Taylor, lies not in art but in mathematics—specifically, in chaos theory and its offspring, fractal geometry.  Fractals may seem haphazard at first glance, yet each one is composed of a single geometric pattern repeated thousands of times at different magnifications, like Russian dolls nested within one another. They are often the visible remains of chaotic systems—systems that obey internal rules of organization but are so sensitive to slight changes that their long-term behavior is difficult to predict. If a hurricane is a chaotic system, then the wreckage strewn in its path is its fractal pattern.  Some fractal patterns exist only in mathematical theory, but others provide useful models for the irregular yet patterned shapes found in nature—the branchings of rivers and trees, for instance. Mathematicians tend to rank fractal dimensions on a series of scales between 0 and 3. One-dimensional fractals (such as a segmented line) typically rank between 0.1 and 0.9, two-dimensional fractals (such as a shadow thrown by a cloud) between 1.1 and 1.9, and three-dimensional fractals (such as a mountain) between 2.1 and 2.9. Most natural objects, when analyzed in two dimensions, rank between 1.2 and 1.6.

In Jackson Pollock's drip paintings, as in nature, certain patterns are repeated again and again at various levels of magnification. Such fractals have varying degrees of complexity (or fractal dimension, called D), ranked by mathematicians on a series of scales of 0 to 3. A straight line (fig. D=1) or a flat horizon, rank at the bottom of a scale, whereas densely interwoven drips (fig. D=1.8) or tree branches rank higher up. Fractal patterns may account for some of the lasting appeal of Pollock's work. They also enable physicist Richard Taylor to separate true Pollocks from the drip paintings created by imitators and forgers. Early last year, for instance, an art collector in Texas asked Taylor to look at an unsigned, undated canvas suspected to be by Pollock. When Taylor analyzed the painting, he found that it had no fractal dimension and thus must have been by another artist. Photographs courtesy of Richard Taylor

Physicist Richard Taylor was on sabbatical in England six years ago when he realized that the same analysis could be applied to Pollock's work. In the course of pursuing a master's degree in art history, Taylor visited galleries and pored over books of paintings. At one point in his research, he began to notice that the drips and splotches on Pollock's canvases seemed to create repeating patterns at different size scales—just like fractals.  Months later, back in his lab at the University of New South Wales in Sydney, Australia, Taylor put his insight to the test. First he took high-resolution photographs of 20 canvases dating from 1943 to 1952. (Pollock moved away from drip painting in 1953.) Then he scanned the photographs into a computer and divided the images into an electronic mesh of small boxes. Finally, he used the computer to assess and compare nearly 5 million drip patterns at different locations and magnifications in each painting—from the length of a full canvas (up to four yards in some cases) to less than a tenth of an inch. The fractal dimensions of Pollock's earlier drip paintings, Taylor concluded, correspond closely to those found in nature. A 1948 painting entitled Number 14, for instance, has a fractal dimension of 1.45, similar to that of many coastlines.  A skeptic might suggest that the effect is coincidental. But Pollock clearly knew what he was after: The later the painting, the richer and more complex its patterns, and the higher its fractal dimension. Blue Poles, one of Pollock's last drip paintings, now valued at more than $30 million, was painted over a period of six months and boasts the highest fractal dimension of any Pollock painting Taylor tested: 1.72. Pollock was apparently testing the limits of what the human eye would find aesthetically pleasing. 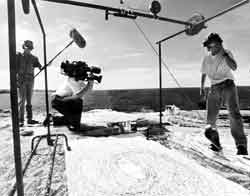 Pollock's drip method was as complex and exquisitely controlled as it seemed crude and haphazard. It often took him weeks to achieve the fractal layerings in his paintings. To create and analyze paintings with similar fractal dimensions (if not the same beauty), physicist Richard Taylor invented a machine he dubbed the Pollockizer. It consists of a container, suspended on a string, that flings paint onto the canvas from a nozzle as electromagnetic coils kick it into motion. Taylor is quick to add that no machine, no matter how clever, can ever replace the human eye when it comes to aesthetic judgments. Photograph courtesy of Richard Taylor

To find out if Pollock's fractals account for his lasting appeal, Taylor next invented a device he calls the Pollockizer. It consists of a container of paint hanging from a string like a pendulum, which can be kicked into motion by electromagnetic coils near the top. As the container moves, a nozzle at the bottom flings paint on a piece of paper on the ground beneath it. By tuning the size and frequency of the kick, Taylor could make the Pollockizer's motions chaotic or regular, thereby creating both fractal and nonfractal patterns.  When Taylor surveyed 120 people to see which patterns they preferred, 113 chose the fractal patterns. Two recent studies in perceptual psychology had also found that people clearly prefer fractal dimensions similar to those found in nature. But the studies disagreed on the exact value of that dimension: In one study, subjects preferred a dimension of 1.3; in the other, 1.8.  Last year, after relocating to the University of Oregon, Taylor collaborated with perceptual psychologists in Australia and England to see if they could resolve the discrepancy. The team began by dividing fractal patterns into three categories: natural, computer-generated, and man-made—the last category consisting of cropped sections of Pollock's drip paintings. They then asked 50 subjects to evaluate about 40 different patterns each, with each subject having to choose between two patterns at a time. The results, published in Nature last March, were conclusive: Subjects preferred fractal dimensions between 1.3 and 1.5, regardless of their origin, roughly 80 percent of the time.  The same predisposition seems to be at work in other mediums as well. Studies have found that people prefer patterns that are neither too regular, like the test bars on a television channel, nor too random, like a snowy screen. They prefer the subtle variations on a recurring theme in, say, a Beethoven concerto, to the monotony of repeated scales or the cacophony of someone pounding on a keyboard.  According to James Wise, an adjunct professor of environmental sciences at Washington State University and one of Taylor's collaborators, those preferences may date back to our earliest ancestors. On the African savanna they could tell whether the grass was ruffled by the wind or by a stalking lion by tuning in to variations in fractal dimensions. But in settings with high fractal dimensions (a densely branching rain forest, for instance), early humans would have been more vulnerable—and thus more uneasy. "Perhaps our appreciation of lower-dimension fractal patterns isn't so much about beauty," Taylor says, "but more a survival instinct."  Artists, architects, writers, and musicians may instinctively appeal to their audiences by mimicking the fractal patterns found in nature. In Pollock's case, at least, the inspiration seems clear. He began his first series of drip paintings, with their tightly meshed surfaces, soon after he moved from Manhattan to a farmhouse on Long Island, New York, in late 1945.  Taylor is so confident of his method that he says he can date any Pollock canvas to within a year by analyzing its fractal dimension. "This is what art theoreticians call the hand of the artist," he says, adding that it's a more reliable measure than the traditional art world's "more subjective analysis."  The Pollockizer proves that generating fractal drip patterns is much harder than it looks, Taylor says. "It's not an inevitable consequence of the process. It was the way Pollock dripped that made it fractal." In a famous 1950 documentary by Hans Namuth, one can see Pollock circling his canvases on the floor, dripping and flinging paint in motions that seem both haphazard and perfectly controlled. He wasn't merely imitating nature, he was adopting its mechanism: chaos dynamics.  All of which suggests Pollock's paintings are more than worth their price tags, Taylor says. "If someone asked, 'Can I have nature put onto a piece of canvas?' the best example there has ever been of that is 1948's Number 14."  For more about Jackson Pollock's life and art, see the Museum of Modern Art's Web site (www.moma.org/ exhibitions/pollock/website100/chronology.html) and the Paris Web museum (www.ibiblio.org/ wm/paint/ auth/pollock).  For a clear introduction to fractals (including an interesting fractal-generating application for Macintosh), go to: astronomy.swin.edu.au/pbourke/fractals/ fracintro.