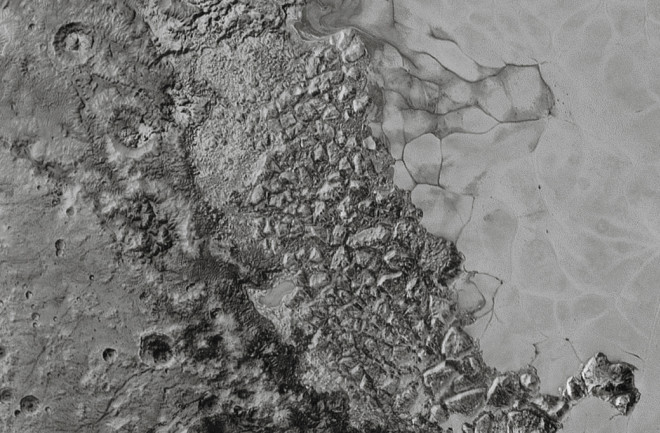 New Horizons images show broken terrain at Sputnik Planum’s edge and a line of faults (not pictured), signaling that the dwarf planet has expanded. | NASA/JHUAPL/SWRI

Sign up for our email newsletter for the latest science news
The impact crater Sputnik Planum, part of Pluto’s famed heart, could be sitting on top of a salty ocean. | NASA/JHUAPL/SWRI

It’s the solar system equivalent of leaving a soda can in the freezer too long: Pluto may be cracking apart as its watery insides slowly freeze.

Ever since the New Horizons probe buzzed Pluto in July 2015, scientists have been poring over the slow trickle of high-resolution images and data to mine the dwarf planet’s secrets. Pluto is more active than scientists dreamed, with mountain chains, roving glaciers and even ice volcanoes. Fissures hundreds of miles long and more than a mile deep hint that something is ripping apart Pluto’s outer shell. And as icy as Pluto’s surface is, researchers suspect the cause is a freezing ocean underneath.

New Horizons images show broken terrain at Sputnik Planum’s edge and a line of faults (not pictured), signaling that the dwarf planet has expanded. | NASA/JHUAPL/SWRI

Noah Hammond, a graduate student at Brown University, spearheaded a study, published in July in Geophysical Research Letters, on Pluto’s potential watery insides. How big an ocean are we talking, and how frozen? Hammond and his colleagues found that it can’t be more than 160 miles beneath Pluto’s surface, or the pressure of a fully frozen global sea would form an exotic version of ice that would contract and buckle Pluto’s surface in ways New Horizons never saw. They say it’s possible a shallower ocean made of normal ice lurks beneath Pluto’s skin, but it’s more likely that a deep ocean is still freezing, which keeps Pluto’s surface churning with activity.

And in September, Brandon Johnson, also at Brown, and colleagues published in the same journal that an ancient impact crater called Sputnik Planum (part of the world’s famous “heart”) also shows signs of sitting over a watery jackpot. Pluto has tilted over the eons, leaning so that the region always faces Pluto’s moon, Charon — a strong hint Sputnik Planum is heavier than surrounding areas. Johnson’s team found the most plausible explanation is that when the crater-forming asteroid hit, the underground basin it excavated filled with extremely salty water — an upwelling from Hammond’s deeper ocean.