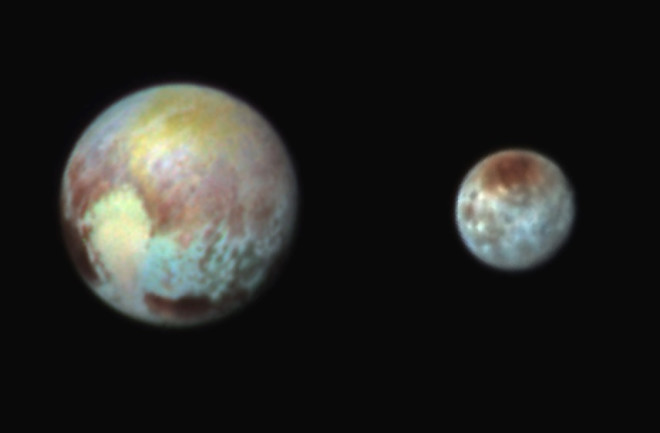 This July 13, 2015, image of Pluto and Charon is presented in false colors to make differences in surface material and features easy to see. These are not the actual colors of Pluto and Charon, and the apparent distance between the two bodies has been reduced for this side-by-side view. Credit NASA/JHUAPL/SwRI NASA’s New Horizons spacecraft sped past Pluto at around 7:50 a.m. EDT today, arriving 72 seconds earlier than expected and missing its aim point by about 45 miles — not bad after a 9.5-year, 3-billion-mile (5 billion km) journey and well within the probe’s target zone. Principal Investigator Alan Stern led a large group of scientists, enthusiasts, and media gathered at the site of mission operations at Johns Hopkins University Applied Physics Lab in Laurel, Maryland, in a countdown to closest approach. As New Horizons zoomed past Pluto’s surface, it performed a tightly choreographed series of maneuvers to learn as much as possible about the world and its five moons, including giant Charon. But the spacecraft wasn’t done. As it flew behind the planetary system, it looked back at both Pluto and Charon as they passed first in front of the Sun and then Earth. These observations will prove the most sensitive for studying the composition and density profile of Pluto’s atmosphere and for seeing whether Charon has an atmosphere at all.

After another few hours spent examining the Pluto system, New Horizons will have a chance to catch its breath and phone home. That should happen around 4:30 p.m. EDT. But Pluto lies so far from Earth that the radio signal will take 4.5 hours to reach the antennas of NASA’s Deep Space Network, arriving at about 9 p.m. That’s when the real celebration will start — proof that the spacecraft survived its passage. No one on the science team seems at all concerned that this won’t happen right on schedule, though everyone will breathe at least a small sigh of relief when the signal arrives and, shortly thereafter, the all-important data starts to reach eager scientists. With little else to do, mission scientists have been visiting with media in attendance, giving their first impressions of the observations returned before closest approach.

Asked multiple times, Stern admitted that it sure looks like it snows on Pluto. But team member Fran Bagenal joked that it wouldn't be a good place for skiing because the snow would be too hard-packed. Deputy Project Scientist Cathy Olkin described some of the features visible on the best single full-disk image of Pluto the spacecraft will return (though the image was compressed to send it back more quickly; the high-resolution version won’t make it to Earth for a few weeks). She pointed out at least three linear features located in Pluto’s north polar region, hummocky and mountainous terrain, craters, the bright region the team has nicknamed the “heart,” and the dark stuff that covers much of the planet’s equatorial region. Many of these features suggest Pluto has been geologically active in the not-too-distant past (a billion years or so), but the scientists have yet to find a smoking gun proving current activity. Team members Bill McKinnon and Bonnie Buratti discussed the bright heart and the ices that cover the area. Both were quite surprised at how dynamic Pluto looks. Going into the encounter, McKinnon mentioned that many scientists thought Pluto would be a blander version of Neptune’s moon Triton. “But we were wrong — it’s like Triton on steroids.” They have looked for features resembling the “black smokers” that erupt on Triton but have yet to see any in the current lower-resolution data.

Both scientists also said they were impressed with the dark polar region on Charon. As McKinnon says: “The dark pole of Charon was a complete surprise to the science team.” This tarry-looking region appears to be the result of sunlight irradiating the combined ices of carbon monoxide, methane, and nitrogen. False-color compositional images released in the afternoon shows the two worlds are truly complex. New Horizons co-investigator Will Grundy says the team is work as fast as possible to identify the different substances the data reveals on the two surfaces. Most intriguing at the moment, though, is that Pluto's "heart" shows two very differently colored regions. No doubt plenty more surprises await in the days, weeks, and months ahead. And one more grand celebration tonight, when New Horizons phones home.