Despite their differences, these two bodies at the edge of the solar system may have been separated at birth. 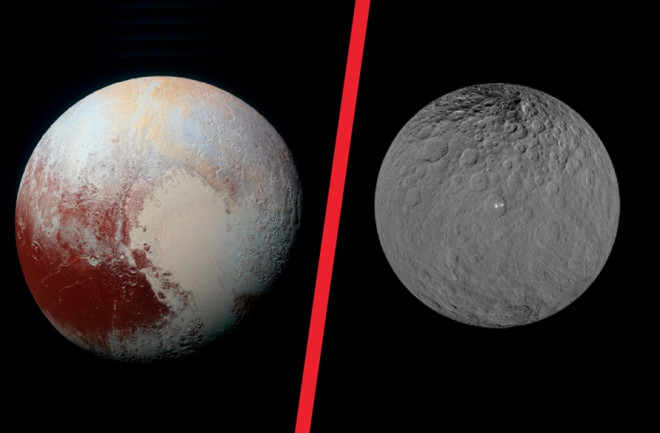 Ceres and Pluto don’t seem to have much in common. Nestled in the asteroid belt between Mars and Jupiter, Ceres is a tiny loner, while Pluto — in the Kuiper Belt at the edge of the solar system — is nearly three times as big and hosts a handful of moons. A mixture of rock and water ice dominates Ceres’ landscape, while methane and nitrogen ices cover Pluto. A thin, hazy atmosphere hangs over Pluto, while astronomers have seen only faint traces of gas above Ceres. The worlds are so dissimilar that planetary scientist Steve Desch says he is one of only a handful of researchers familiar with both.

But look a little closer, and it turns out the dwarf planets aren’t all that different. New traces of ammonia on Ceres hint at a much closer relationship between the pair. Large depressions mar the surface of each, and both feature icy volcanoes possibly powered by liquid beneath the surface. In fact, astronomers are beginning to consider them twins, albeit fraternal, born in the same place at the same time but separated almost immediately after birth. Their differing adult features reflect their adopted environments.

One more commonality: NASA spacecraft visited both worlds in 2015 — New Horizons flew past Pluto and Dawn began orbiting Ceres. It’s thanks to those missions that we have all this new data in the first place. “If you took a Pluto-like body and put it in the asteroid belt, it would probably look a lot like Ceres,” says astronomer Will Grundy, a co-investigator for New Horizons.

Separated at Birth It turns out that might actually be the case, with Ceres originally starting out nearer to Pluto, before getting shoved around by the bigger planets.

The early solar system was a chaotic place, and astronomers now suspect many of the planets may have wandered before settling into today’s orbits. Two models, both devised in the 2000s, best fit the orbital data. One, the Grand Tack hypothesis, suggests that Jupiter and Saturn initially ducked inward to the inner solar system, before gravitational imbalances sent them back to their current orbits far from the sun. The other, the Nice model, suggests the four gas giants (Jupiter through Neptune) initially had tiny, tight orbits, which eventually spread out slowly to what we see today. The two theories aren’t mutually exclusive; Sean Raymond, one of the theorists behind the Grand Tack, says it was designed to work with the Nice model. “They play well together,” he says.

In all the early chaos, a thousand Plutos may have formed in the distant part of the solar system where Neptune orbits today, including a nascent Ceres. Then the shifting gas giants scattered those bodies everywhere. “In the great rearrangement of the solar system, Pluto went outward, Ceres came inward,” says planetary scientist and New Horizons co-investigator William McKinnon. He proposed Ceres’ migration in 2008 — the first hint of a potential sibling relationship between the two worlds.

It’s possible that Ceres could have formed near its current place in the asteroid belt, McKinnon concedes, but then it would be “a most unusual asteroid.” The dwarf planet alone accounts for about a third of the belt’s mass, and its icy interior distinguishes it from its rockier neighbors. Plus, recent observations on Ceres’ surface of ammonia (of household cleaner fame) also hint toward a more distant origin, to a time and place when such compounds were more common.

As for Pluto’s migration, Neptune probably managed the heavy lifting. When the ice giant spiraled outward, it carried nearby smaller icy bodies along with it, shepherding them toward the edge of the solar system. It’s just a twist of fate that Neptune carried away Pluto, while Jupiter and Saturn brought in Ceres.

Active Worlds The dwarf planets defied expectations when NASA’s spacecraft arrived. Instead of observing cold, dead blocks of ice, Dawn and New Horizons saw dynamic planets with signs of ongoing activity. Although water and ice should evaporate rapidly on Ceres, with its exposed surface, Dawn saw signs of ice in some of its craters. Pluto, far from the sun, constantly repaints its surface with new material, most likely liquids welling up from below and freezing on its surface.

Both worlds might also boast the same strange phenomenon: icy volcanoes spouting frigid lava. Ceres has only one mountain, a dome-like bulge about half the size of Mount Everest known as Ahuna Mons. Pluto has a pair of slopes in its southern hemisphere, informally named Wright and Piccard Montes. On Ceres, the ice is made up of frozen salt water and mud, but on Pluto, it’s probably ammonia. While “we think of ammonia like Mr. Clean and Windex, very liquid,” McKinnon says, at Pluto’s subfreezing surface temperatures, ammonia freezes into solid ice. “Once you get it that cold, it’s like honey or hot basaltic lava, so it will act more like lava,” he explains.

Desch and Marc Neveu, both at Arizona State University, model cryovolcanism on icy worlds. Neveu says a slushy mix would be driven to the surface of both planets “if the fluid has an extra push.” What could provide that push? Two potential scenarios: gas seeping from the liquid solution, like carbon dioxide escaping from an open soda can, and a pressure difference caused by the slow freezing of liquids.

Both worlds actually show recent signs of such oozing eruptions. On Ceres, the relatively smooth flanks of Ahuna Mons and the presence of water ice suggest material bursting forth from within. The strange texture of the plains around Pluto’s mountains suggests flowing lava. Scientists aren’t sure yet how active the volcanoes are today.

Hot and Cold If Pluto and Ceres are so similar, why do they seem so different? Location, location, location. Pluto spends its time far from the sun, where temperatures hover around minus 391 degrees Fahrenheit; Ceres is much closer and can heat up to minus 37 F (warmer than summers at Antarctica’s Vostok station).

“[On Ceres] you could wrap up and walk around with a bunch of jackets. And oxygen,” says New Horizons planetary scientist Carey Lisse. “[On] Pluto, you couldn’t do that. You would have to add a heavy double or triple layer inside your spacesuit.”

This fundamental difference in temperature accounts for many of the current disparities between the two worlds. The most vulnerable substances, such as the methane and nitrogen ices found on Pluto, would have quickly boiled away on Ceres’ warmer surface.

In fact, when Dawn spied a muddy crust on the tiny dwarf planet’s surface, scientists suspected it may be the dregs left behind when the original outermost layer was stripped away, exposing a once-liquid ocean beneath. “Ceres could have been about half of Pluto’s size,” planetary scientist Julie Castillo-Rogez says. Closer initial sizes certainly make the worlds more likely to be related. And while Ceres’ ocean has frozen, Pluto’s looks like it has a subsurface ocean that froze fairly recently, or might even be still liquid today — another of New Horizons’ shocks.

This leads to a practical benefit. It’s currently impossible to probe beneath the icy crust of a planet like Pluto, but if Ceres does have an exposed frozen (once subsurface) ocean, that gives planetary scientists a useful proxy.

Rough Neighborhood Beyond the temperature disparities, the two worlds’ neighbors also contribute to their differences. They were both bombarded in the chaotic, early solar system, but Ceres would have been the target of rockier bodies that did more damage than Pluto’s icier associates.

One enormous impact formed Pluto’s photogenic “heart,” a basin 1,100 miles wide known as Tombaugh Regio. Methane ice crept up from Pluto’s subsurface ocean to fill the crater. Since older regions are more heavily cratered, a lack of craters suggests the area is no more than 100 million years old. That’s an eye-blink in the 4.5 billion-year lifetime of the solar system.

Ceres’ massive basins were harder to spot. Astronomers thought the dwarf planet should sport multiple giant impact craters, but the Dawn probe didn’t see any. Simone Marchi, a planetary scientist at the Southwest Research Institute in Colorado, did find traces of large impact basins comparable to Tombaugh Regio in Dawn’s data. The strongest contender is a 500-mile-wide depression known as Vendimia Planitia, which probably formed when a large object crashed into Ceres. Unlike what happened on Pluto, any ice that filled up the basin on Ceres’ warmer surface would have quickly turned to gas from the sun’s heat.

While planetary scientists have some potential answers, they’ve barely scraped the surface of the data from New Horizons and Dawn. New Horizons sent home its final observations of Pluto last year, and Dawn is still orbiting Ceres. As they ponder new data, we’ll learn even more about the planets, and how closely related they just might be.

“It’s like being a mechanic trying to fix a race car and a pickup truck,” Desch says. “[They’re] alike enough to learn something about one from the other, but different enough to be a lot of work.” But then, whoever said unraveling the mysteries of the solar system would be easy?