Physics Proves It: Everyone Should Shoot Granny-Style 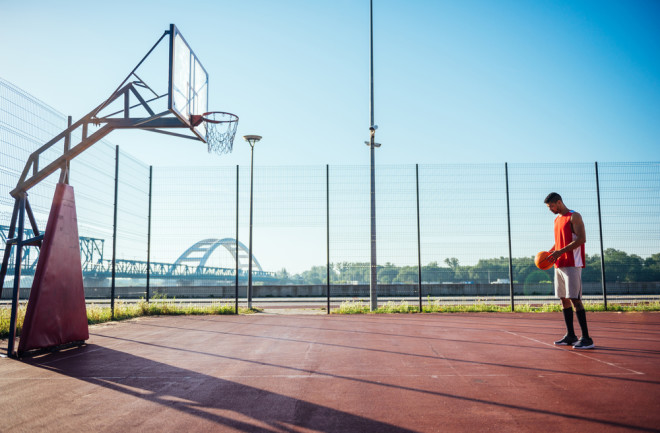 As a boy in Elizabeth, New Jersey, in the 1950s, basketball legend Rick Barry got some painful coaching lessons from his father, a semipro. While the youngster’s friends liked to shoot their foul shots, or free throws, in the respectable overhand style, the old man wanted Barry to toss them just as he did—underhand. “That’s the way little kids shoot, and it didn’t help that everybody calls it the ‘granny shot,’?” Barry says. “I didn’t want any part of it, but my father drove me nuts until I tried it. And amazingly, it worked.” Barry’s average from the free throw line bounced from 70 to 80 percent and kept on climbing when he became a pro. “Nobody ever teased me, but then it’s hard to tease somebody when the ball keeps going in.”

Judging by mechanics alone, just about every foul shot should be a winner. “There’s nothing simpler in basketball, because you can take all the time you want to make it, and there’s nobody waving his arms in front of you trying to block you,” says Peter Brancazio, a physics professor emeritus from Brooklyn College and author of SportsScience: Physical Laws and Optimum Performance. “It’s like bowling. You do exactly the same thing over and over and over again.” Yet while Barry can easily sink 9 out of 10 shots, other players fall far short. The late Wilt Chamberlain, for instance, could shoot a basket from just about anywhere on the court—except when he toed up to the line 15 feet from the hoop. There, the legendary “Big Dipper” sank barely 5 of 10 shots, one of the lowest percentages in professional basketball.

Sports columnists gripe about the bad free throw techniques of modern players like Shaquille O’Neal, but probably no one has suffered more public humiliation at the free throw line than former Knicks player Chris Dudley. One year he made only 3 of every 10 shots, and in the 2000 season, when he managed to sink two free throws in a row during the playoffs, he made headlines (“Chris No Dud at Foul Line!” screamed the New York Daily News). “I’m convinced that from a physics standpoint, if everyone learned to throw underhand you’d see these statistics rise dramatically,” Brancazio says.

The key to a successful foul shot lies in the arc of the ball—in general, the higher the better. While an official-size basket is 18 inches in diameter, the basketball itself is only about 9 1/2 inches, which gives a margin of 8 1/2 inches. But when the ball is thrown nearly straight at the basket, in the style of Shaq, the margin disappears because the rim of the basket, from the perspective of the ball, resembles a tight ellipse. “That’s why these guys miss so much,” Brancazio says. “Because of the sharp angle of the typical overhand throw, there ends up being a much smaller window for the ball to go in.” If the ball comes down at the basket from a steeper angle, the way it does if tossed up in the high arc characteristic of an underhand throw, the margin reappears. “That means there’s a far greater chance of making the basket,” he says.

Using lots of trigonometry, Brancazio calculated the optimal angle of the arc from the free throw line. If tossed at 32 degrees or less, the ball will most likely hit the back of the rim. “That doesn’t mean it won’t go in, but it will certainly bounce off the metal and reduce the chance of success,” Brancazio says. At angles greater than that, the ball has a chance of making a nice swish. The optimum angle for the shot, he finds, is 45 degrees—plus half the angle from the top of the player’s hand to the rim. “The shorter you are, the steeper that angle has to get to give you the best chance of making the shot,” he says. Of course, lobbing a ball very high so that it comes down nearly straight into the basket would be the most efficient technique, but a shot like that “is almost impossible to aim,” Brancazio says. Instead, he says, his formula makes it possible for a player to shoot with the largest possible margin for error.

Another reason why the granny shot helps a free thrower win cheers rather than jeers: It gives a backward spin to the ball. If a ball with backspin happens to hit the metal rim of the basket, the friction of contact suddenly reduces its forward velocity. “It’s like a drop shot in tennis. The ball bounces, but it doesn’t have a forward motion on it,” Brancazio says. This effect tends to freeze the ball at the rim and greatly increases the chance that it will tip into the basket rather than ricochet off.

The underhand throw can also minimize the drift of the ball. “A little sideward nudge at the start of the throw will translate into a big movement toward the end,” says Tom Steiger, a researcher who taught basketball physics at the University of Washington in Seattle. The trick to keeping the ball moving along a single plane toward the basket lies in “minimizing the sideways motion,” he says. “In other words, you have to keep your elbows tucked in.” If they are sticking out, that can easily add an unwanted nudge to the ball, which results in a missed shot. The underhand throw provides better stability than the overhand “because you’re holding the ball with both hands,” Steiger says. This helps players balance the subtle motor muscles in the hands and keeps them more relaxed. The movement of the underhand throw is a simple, easy-to-control upward pendulum motion. By contrast, the more conventional overhand free throw shot involves separate movements of the wrist, elbow, and shoulder that can add errors, Steiger says. “If the ball ends up rolling off one side of your hand even a little bit, you’ll miss.”

Despite the logic of a granny approach to foul shooting, no NBA player has used it since Barry retired in 1980. “That baffles me,” Barry says. “With the underhand shot, I could make 80 percent of my throws with my eyes closed. And I do mean closed.” Over the years he has tried to convert everyone from four of his sons who have played professionally to Shaq to Chris Dudley—but nobody has paid any attention. “A lot of guys who are lousy at the free throw would be prime candidates for this, but they just won’t do it,” says Barry, whom the NBA identified as one of the 50 Greatest Players in history in 1996. “I mean, how can guys call themselves professionals when they can’t even make 60 percent of their free throws? Where’s their sense of pride?”

Perhaps that’s the problem with the granny shot. “As good as it is,” Steiger says, “it does look kind of stupid.”