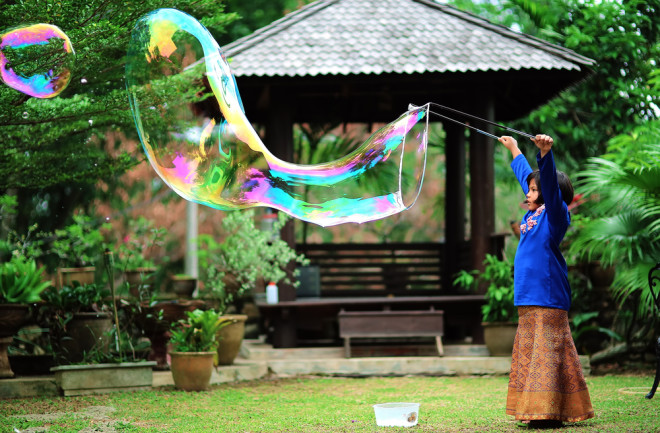 The secret to blowing giant bubbles lies in the right mix of polymers. (Credit: Fairuz Mustaffa/Shutterstock)

Bubble enthusiasts know that much of the secret to a bubble's iridescent success lies in the soapy mixture they're made from. There's a whole wiki page devoted to finding the perfect formula. And now that a team of physicists has looked at bubble formation in the lab, there’s a better explanation for what allows thin, sudsy films to expand.

Besides soap, many bubble-blowers also use additives called long-chain polymers — or long molecules similar to what's used in plastics — in their solution. The research found that, when added to bubble solution, these polymers stretch and let large bubbles expand, especially when they come in a variety of lengths.

“You gotta have a long-chain polymer, but if you have too much it’s almost like a gel — too thick and goopy,” says paper co-author Justin Burton, a physicist at Emory University. Their work, published in the journal Physical Review of Fluids, helped the team produce a physicist-approved recipe for optimum soap bubble-blowing.

Burton first realized how strange a phenomenon bubbles are when he saw street performers in Madrid blow huge, wobbly orbs for people walking by. The films are microscopically thin, yet they stay together and stretch.

And those in the know don’t just rely on soap: The best bubble mixtures include guar gum, a plant derivative that makes fluids goopier, and polyethylene oxide, a molecule that facilitates sliding — it’s the primary ingredient in constipation-reliever MiraLAX.

Burton wasn’t interested in growing huge bubbles, necessarily. That would take fishing poles and yarn and lots of space. “That’s an art unto itself,” he says. “We wanted to focus on the molecules in the soap film that help you produce those films and help them be stable.”

So, he and his students got down to some serious bubble science. Starting with a dish-soap solution, they experimented with different amounts of guar gum and polyethylene oxide. The team watched how the fluids dripped and recorded how their bubbles popped with a high-speed camera. Working backwards, the team figured out how some of the suds managed to inflate and stretch.

Too high a proportion of guar or polyethylene oxide made the mixture overly viscous — so it was too hard for the material to expand, Burton says. But the right level of additive meant that the long molecules gave the soap film some stretch.

“These polymers are like crumpled-up hairballs,” Burton says. “You get to a density where, when you try and stretch the fluid, you stretch the hairballs.” Their rubber band-like behavior is what lets the thin film expand.

When some of the molecules are shorter than others — like what happens when a bottle of polyethylene oxide sits too long and the product starts to decay — those particles help the fluid reach maximum stretchiness before it crosses into goopy territory.

Not everyone blowing bubbles does it on the sidewalk. Producers of manufactured foams might be interested in learning how to make those bubbles more stable. Some pollutants foam up in water, and those bubbles are ones that industry or water treatment centers might like to pop.

A better understanding of how the molecules in bubbles collaborate could help design products that boost or inhibit their productivity, Burton says.

For now, his team plans to look into how these molecules of different lengths do what they do. “We go where curiosity takes us,” Burton says.