Einstein's equations have held up remarkably well for over a century. But they leave tantalizing gaps in our knowledge. 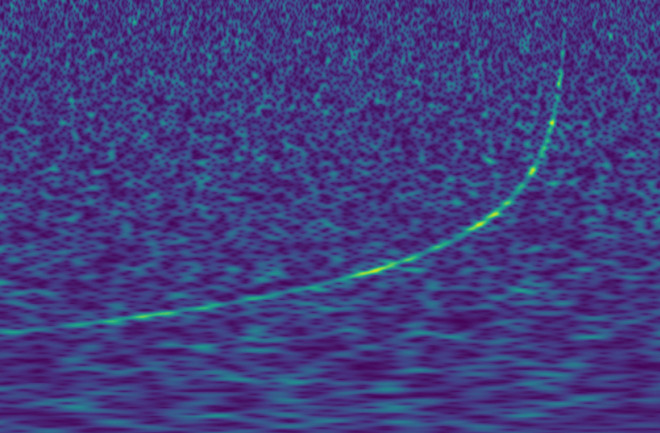 A spectrogram shows the rising frequency of gravitational waves emitted by a collision between neutron stars, providing the kind of data that could be used to test Einstein’s general theory of relativity. (Credit: LSC/Alex Nitz)

Sure, he was already well-known among physicists. But the world at large learned his name only after November 1919, when news broke that his theory of gravity had been confirmed — to the dismay of many fans of Isaac Newton.

“Lights All Askew in the Heavens” shouted the headline in the New York Times. “Einstein Theory Triumphs,” a subhead added. As the article recounted, an observation of stars near the sun during a solar eclipse found their apparent position shifted just as Einstein had predicted. Newton’s law of gravity, considered inviolable for over two centuries, had been repealed.

The first major test of Einstein’s general theory of relativity came in 1919 from an eclipse, shown here in an image from the scientific paper reporting that light from distant stars was bent by the sun’s gravity just as Einstein’s theory had predicted. (Credit: F.W. Dyson, A.S. Eddington and C. Davidson)

But despite the triumph of Einstein’s theory — general relativity — physicists still wonder whether it will someday face the same fate as Newton’s law. While Einstein’s gravity has passed every test so far, nobody knows for sure that it applies everywhere, under all conditions. In particular, there is no guarantee that general relativity reigns over the entire expanse of the cosmos. And several rival theories have been proposed over the years just in case it doesn’t.

After Einstein proposed his new theory, it was mostly ignored for a few decades. But in the last half of the 20th century, general relativity became the theory of the universe. Its equations describe the expansion of the cosmos from its initial high-density, hot big-bang beginning to its current rapidly accelerating expansion. And today general relativity has earned increasing popular notoriety as scientists have verified its more exotic predictions, including black holes and the vibrations in space known as gravitational waves.

But general relativity’s string of successes may not be endless. It’s true that the theory (along with the theory for nature’s three other fundamental forces) describes the observable universe quite well. That description includes massive amounts of invisible mass, known as dark matter, along with a peculiar repulsive force, called dark energy, perfusing all of space. But the dark stuff’s existence is deduced from the assumption that general relativity is correct.

“Given that there is no other (nongravitational) evidence for the dark sector, it is a matter of common sense to question some of the fundamental assumptions that go into the evidence. And the main assumption is that general relativity is the underlying theory of gravity,” astrophysicist Pedro Ferreira of the University of Oxford in England writes in the current Annual Review of Astronomy and Astrophysics. If you don’t assume general relativity is in fact correct, then “evidence for the dark sector may signal a breakdown of general relativity on cosmological scales,” Ferreira points out.

In other words, it’s conceivable that there is no dark stuff. If that’s the case, apparent evidence for its existence might actually be a sign that the true cosmic theory of gravity differs from Einstein’s. If so, the current picture of the cosmos would have to be drastically redrawn.

Still, physicists have plenty of reason for confidence in general relativity’s reliability. For one thing, it solved a knotty problem that had perplexed astronomers about the planet Mercury: a discrepancy in its orbit from that forecast by Newtonian gravity. Einstein announced his theory in 1915 as soon as he was able to show that it correctly predicted Mercury’s actual orbit.

Einstein’s key to solving the Mercury mystery was conceiving gravity as an effect of the geometry of space (or technically, spacetime, since his earlier work had shown space and time to be inseparable). Gravity is not a mutual tug of massive objects, Einstein said, but rather the result of a mass’s distortion of the spacetime surrounding it. Objects orbit or fall into a massive body depending on how strongly the spacetime around it is curved. Rather than responding to some attractive force, masses just follow the contours of spacetime’s geometry.

Gravity as geometry led to the famous prediction verified in the 1919 eclipse. Einstein pointed out that the curvature of spacetime near the sun would cause light from distant stars to bend when passing nearby, changing the stars’ apparent positions as seen from Earth. That prediction inspired an eclipse expedition to the West African island of Principe in May 1919, led by British astrophysicist Arthur Eddington. Eddington’s team found that the positions of several stars were shifted by just the amount that Einstein’s math indicated they should be, and twice as much as Newton’s law predicted. When the eclipse team announced the results in November 1919, one news account heralded them as signaling the need for “a new philosophy of the universe.”

In 2019 the Event Horizon Telescope project produced the first image of a black hole, showing the core of galaxy M87. Details of the distortion of light by the black hole, as revealed in such images, may help test the validity of Einstein’s theory of gravity. (Credit: EHT Collaboration)

In the century since, Einstein’s gravity has passed many additional tests, such as the spectacular detection of gravitational waves, reported in 2016. But it’s not possible to test the theory under all conceivable conditions. And experts have long suspected that general relativity can’t be right in realms of extremely high mass density. At the center of a black hole, for instance, the theory’s equations no longer make sense, because they imply that matter density would become infinite.

Traveling to the interior of a black hole to test general relativity would be a poor strategy, for many reasons. But scientists staying safely home on Earth can probe realms of fairly strong gravity, possibly offering clues. One project uses a network of telescopes to image the region near the outer edge of a black hole — its “event horizon” (the point of no return for anything falling in). Such images can provide details of how matter flows into the black hole from its “accretion disk,” a ring of orbiting material outside the event horizon.

Gravitational waves can also provide details of gravity under extreme conditions, as when two black holes collide. Analyzing the spacetime ripples emanating from such collisions could reveal possible flaws in general relativity’s predictions.

If general relativity ever fails, multiple competing gravity theories proposed in recent decades would be waiting in the wings. Most of them boil down to adding a new force to nature’s repertoire of gravity, electromagnetism, and the strong and weak nuclear forces. Apart from gravity, the three other known forces are accurately described by the “standard model,” a set of equations that obey the requirements of quantum mechanics. General relativity does not accommodate the quantum math, though, so a major research effort has long been underway to develop a theory combining gravity and quantum theory.

“Unification of general relativity and quantum physics is widely considered as the most outstanding open problem in fundamental physics,” physicist Abhay Ashtekar of Penn State University said at a recent symposium for science writers.

Such a unifying theory, most experts believe, would entail some sort of modification to general relativity.

One way of modifying the theory would be incorporating a new energy field permeating space. The strength of such a field at different locations could alter general relativity’s predictions for matter’s behavior.

Some theorists have proposed instead that an additional source of spacetime warping — an extra layer of geometry — might be a more fruitful approach. Still other proposals, such as superstring theory, could modify general relativity by allowing more dimensions of space than the three commonly encountered. With some mathematical manipulations, all these approaches amount to adding a fifth force.

Situated in a high-altitude desert in Chile, the Atacama Pathfinder Experiment (APEX) radio telescope is part of the global array that makes up the Event Horizon Telescope, which captured the first image of a black hole. (Credit: ESO/B. Tafreshi/TWAN)

So far, tests seeking signs of a new fifth force have found nothing. But those tests have been conducted on relatively small scales (compared with the universe as a whole). It’s possible that general relativity prevails in those tests because other physical effects mask or screen out the deviations that a fifth force would induce. But effects screened out on small scales might be noticeable on large scales, writes Ferreira. “This is uncharted territory and one of the few pristine arenas in which we might find evidence for new physics.”

Another testable tenet of general relativity is its requirement that gravity travels at the speed of light. Gravitational waves provide a way to test that. In 2017, the merger of two neutron stars not only sent gravitational waves to Earth (traversing a distance of 130 million light-years) but also released bursts of electromagnetic radiation, including X-rays and gamma rays, which travel at precisely the same speed as light. Arrival time for the electromagnetic rays and the gravitational waves showed their travel speeds to be identical (within one part in a quadrillion) — ruling out many alternative gravity theories that predicted a difference.

Further such tests, and more refined observations of other cosmological features (such as the remnant microwave background radiation generated when the universe was young), might still someday find flaws in general relativity. If so, some Einstein fans may be disappointed, but most physicists won’t be. They’d relish the excitement of opening a new chapter in the history of physics.

“With the multiple new windows on the gravitational universe…, one would hope that new forces and phenomena are on the verge of discovery,” writes Ferreira. But if Einstein prevails over cosmic distances, Ferreira says, there’s a consolation prize. “In the very least, we will end up with a cast-iron theory for gravity, tested over an enviable range of scales and regimes.”

Tom Siegfried is a science writer and editor in the Washington, DC, area. His latest book, The Number of the Heavens, about the history of the multiverse, was published in September by Harvard University Press.