Photographed: The Glow from a Single, Hovering Strontium Atom 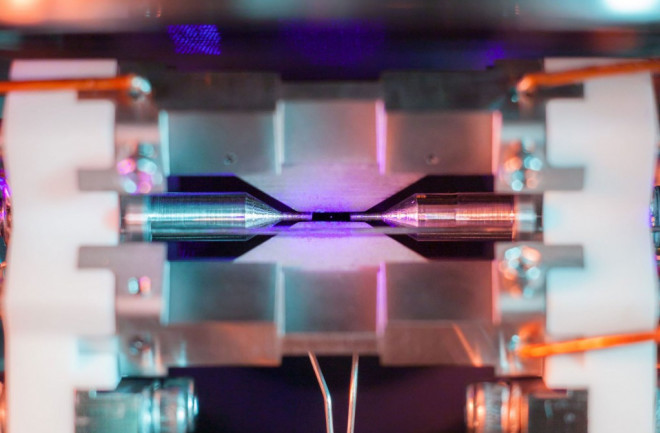 In the photo above, you’re looking at a single, positively charged strontium atom suspended by electric fields.

It’s an atom, visible to the naked eye.

David Nadlinger, a quantum physicist and PhD candidate at Oxford University, is the person who put it all together. He titled his picture “Single Atom in an Ion Trap.” A blue-violet laser blasts the atom, which then absorbs and re-emits enough light particles to be photographed with conventional equipment. So, technically, you’re seeing light emitted from an atom and not the atom itself. Two metal electrodes generate electric fields that hold the atom nearly motionless. For perspective, the space between the two metal forks is roughly 2 millimeters.

“The idea of being able to see a single atom with the naked eye had struck me as a wonderfully direct and visceral bridge between the miniscule quantum world and our macroscopic reality,” Nadlinger told EPSRC. “A back-of-the-envelope calculation showed the numbers to be on my side, and when I set off to the lab with camera and tripods one quiet Sunday afternoon, I was rewarded with this particular picture of a small, pale blue dot.”

It may not be planet Earth, but my guess is Carl Sagan would have no problem with Nadlinger’s new twist on an iconic “pale blue dot.”