Perhaps It Has Begun! 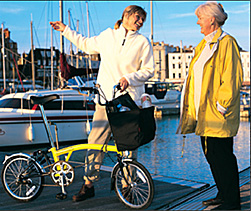 Yesterday, while on foot to a lunch meeting on campus, guess what I saw.... Another Brompton! You've no idea how exciting that is. (If you don't know what I'm talking about, and you most likely don't, see my earlier posts here, and here.) Sure, it's nice to be maybe the only bike of its sort in the city, and while tiring to have to explain what it is all the time, sure, it's nice to get the rounds of applause and requests for autographs every time I fold or unfold it in public. But frankly, I really prefer the thought that people are waking up to the idea that this is the way to go: Cycling more, and using public transport in combination with that. As I've said before on this blog, LA is an ideal city for cycling (mostly flat, perfect weather most of the time) and the best way to take advantage of the bus, rail and subway system (sigh...yes, they exist, but there are gaps) is to connect them up with a bike. And a folding bike is ideal. A beautifully engineered, comfortable, and compact, really fast folding one is even more ideal. That leaves one bike that fits the bill: The Brompton. Now, I want more people to move away from their tired excuses for using cars all the time (and I don't just mean this city, or this country, by the way), and so I get excited when I see people choosing to cycle, walk, and use the buses and subways. It's nice to see people making the same choices as yourself, if only as a means of cameraderie, and, ok, so that you can exchange a knowing wink with someone. 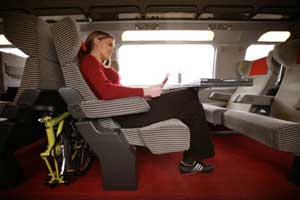 I'd sort of given up ever seeing another Brompton in this city, so seeing a brand new one just a few buildings away is just great! (I could at this point say that phrase that has been used twice in other post this week: "maybe someone's been reading cosmicvariance", but I won't). So now I'm keeping an eye out all over campus to see if I will ever see it again, and maybe chat with the owner who I only glimpsed briefly (and who'd ridden out of range before I recovered from being speechless at seeing another B), let her know she's not alone, find out if she takes hers on buses and trains (maybe the bike does not know its heritage!), etc. So exciting! So now that there's two, maybe that means there'll be more and more (like I've noticed more USC people on the bus in recent weeks...gas prices combined with common sense?). Perhaps the avalanche has begun.... Two of us is enough to get more people at USC riding them, then maybe our rivals, the UCLA campus, will get in on the act so as not to fall behind....and then maybe Bromptons all over the rest of the city (like has happened a lot in London), and then all over America...enlightenment at last! Hurrah! -cvj P.S. I snipped those pictures from these websites: here and here.