Update: Gurzadyan and Penrose have very quickly put up a response to the analysis papers quoted below. And another paper critical of G&P has appeared, by Amir Hajian. 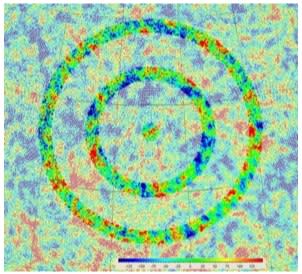 Roger Penrose and his collaborator Vahe Gurzadyan made a splash recently by claiming that there was evidence in the cosmic microwave background for a pre-Big-Bang era in the history of the universe. (Here's the paper.) The evidence takes the form of correlated circles in the cosmic microwave background anisotropies, as pictured here. They claim that they have found such circles at a level of significance much higher than would be predicted in a conventional scenario, where perturbations were random and uncorrelated on various scales. That would be pretty amazing, if true. But it looks like it isn't. Here are two skeptical papers that just appeared on the arxiv. (Hat tip to David Spergel. Peter Coles was an early skeptic.)

A search for concentric circles in the 7-year WMAP temperature sky maps Authors: I. K. Wehus, H. K. Eriksen Abstract: In a recent analysis of the 7-year WMAP temperature sky maps, Gurzadyan and Penrose claim to find evidence for violent pre-Big Bang activity in the form of concentric low-variance circles at high statistical significance. In this paper, we perform an independent search for such concentric low-variance circles, employing both chi^2 statistics and matched filters, and compare the results obtained from the 7-year WMAP temperature sky maps with those obtained from LCDM simulations. Our main findings are the following: We do reproduce the claimed ring structures observed in the WMAP data as presented by Gurzadyan and Penrose, thereby verifying their computational procedures. However, the results from our simulations do not agree with those presented by Gurzadyan and Penrose. On the contrary we obtain a substantially larger variance in our simulations, to the extent that the observed WMAP sky maps are fully consistent with the LCDM model as measured by these statistics.

No evidence for anomalously low variance circles on the sky Authors: Adam Moss, Douglas Scott, James P. Zibin Abstract: In a recent paper, Gurzadyan & Penrose claim to have found directions on the sky centred on which are circles of anomalously low variance in the cosmic microwave background (CMB). These features are presented as evidence for a particular picture of the very early Universe. We attempted to repeat the analysis of these authors, and we can indeed confirm that such variations do exist in the temperature variance for annuli around points in the data. However, we find that this variation is entirely expected in a sky which contains the usual CMB anisotropies. In other words, properly simulated Gaussian CMB data contain just the sorts of variations claimed. Gurzadyan & Penrose have not found evidence for pre-Big Bang phenomena, but have simply re-discovered that the CMB contains structure.

The basic message is simple: sure, you can find some circles in the sky if you look there. But they are simply what you would expect from random alignments, not a new signal over and above the usual predictions. The authors here are respected CMB analyzers, and I strongly suspect that they are correct. Which reminds us of an important lesson: analyzing the CMB is hard! It's a very messy universe out there, and if you don't take every single source of error correctly into account, you can convince yourself of all sorts of things. Just because this particular signal is there doesn't mean the underlying model -- Penrose's Conformal Cyclic Cosmology (CCC) -- isn't right. I'm all in favor of pre-Big-Bang cosmologies myself, and Penrose more than anyone has been correct in insisting that the low entropy of our early universe is a crucial problem that is not well-addressed in modern cosmology. But I've been hesitant because, frankly, I don't really get it. As far as I know, there isn't any exposition of the CCC in the form of a freely-available technical paper. There is a book, which hasn't officially been released in the U.S. but you can get your hands on if you try hard enough, which I did.

Roger Penrose, Cycles of Time: An Extraordinary New View of the Universe

Even with the book in my hands, however, I can't quite discern the underlying physical mechanism that makes it all work. The basic point is this. The very early universe is smooth. The universe right now is lumpy, with stars and galaxies and black holes all over the place. But the future universe will be smooth again -- black holes will evaporate and the cosmological constant will disperse all the matter, leaving us nothing but empty space. (Just wait about 10^100 years.) So, Penrose says, we can map the late universe onto a future phase that looks just like our early universe, simply by a conformal transformation (a change of scale). Do this an infinite number of times, and you have a cyclic cosmology -- the universe goes through a series of "aeons" that start with a smooth Big Bang, get lumpy as structure forms, smooth out again, and then gets matched onto another smooth Big-Bang-like phase, etc. If you're sketchy on that last bit, join the club. Sure, mathematically we can map the smooth late universe onto the smooth early universe. But what physical process would actually cause that to happen? Despite having the book in my hands, I'm still unclear on this. (I absolutely confess that the answer might be in there, but I simply haven't read it carefully enough.) While the early and late universes are both smooth, they are very different in other obvious ways, such as the energy density. What causes the low-density late universe to come alive into something like the high-density early universe? Something like that happens in the Steinhardt-Turok cyclic universe, but in order to make it happen you need to specify some particular matter fields with very specific dynamics. This isn't a trivial task; there are things you can try, but they generally are plagued by instabilities and singularities. I don't see where Penrose has done that, so I'm not even sure what there is to be criticized. Regardless, I am highly skeptical of cyclic cosmologies no matter what flavor they come in. The most obvious empirical fact about our observable universe is its temporal asymmetry -- the early phase is very different from the late phase, even though no such difference is to be found in the fundamental laws of physics. (I wrote a book about this, if you're interested -- Roger Penrose blurbed it.) Our goal should be to explain that asymmetry. But cyclic cosmologies simply extend it over an infinite number of cycles, without any explanation. If you took a typical state of the universe today and played it backwards in time, you wouldn't expect to get anything like these cyclic cosmologies; it would just collapse into a mess. What you would need to do is argue that this kind of behavior arises robustly from a wide variety of possible initial conditions. If you need some special conditions, fine -- but you're not doing any better than the ordinary Big Bang.