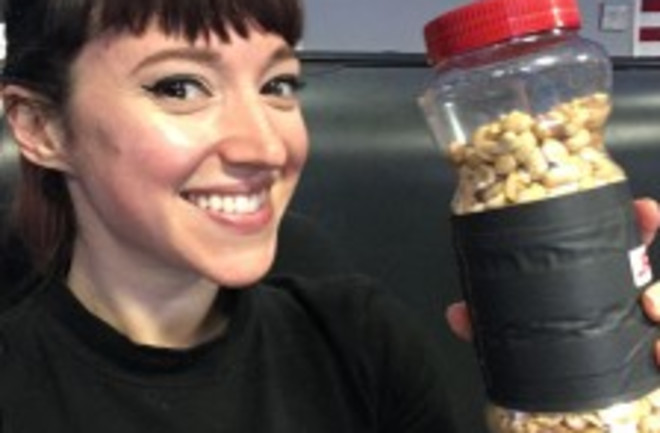 Holding the current bottle of peanuts in the MSA. Teitel. Next to the Deep Space Network’s main control room at JPL is the aptly named Mission Supply Area. It's an area used for major mission events like launches, landings, and orbit insertion burns, and if you go there on a tour someone will offer you peanuts. It’s tradition, a tradition that gained a lot of popularity when the world watched engineers eating peanuts during Curiosity’s 2012 landing on Mars. There’s even a cardboard cutout of NASA’s very own mohawk guy, Bobak Ferdowsi, behind the glass-encased bottle of peanuts that was in the room that night! But the tradition is far older. It dates back to 1964 when America was desperate for a successful lunar mission. Here's the short answer. If you're keen to know more about each failed Ranger mission, read on after the video! [embed]https://www.youtube.com/watch?v=ELtJ7jzEBgQ[/embed] Before sending men to the Moon, NASA had to figure out what exactly it would be dealing with when it got there. Thus was born the Ranger program, the first program to study the Moon up close and in detail. Management of the program fell to JPL since this was the centre with robotic experience; Explorer 1, America’s first satellite, was a JPL success story. Technologically Ranger was a simple design. The first iteration of the spacecraft, the so-called Block I model, was a hexagonal base 5 feet (1.5 meters) across with an upper cone-shaped portion 13 feet (4 meters) tall and two solar panels measuring 17 feet (5.2 meters) across. Communicating via a high-gain directional dish antenna, the spacecraft would send back data from its Lyman-alpha telescope, rubidium-vapor magnetometer, electrostatic analyzers, medium-energy range particle detectors, triple coincidence telescopes, cosmic-ray integrating ionization chamber, cosmic dust detectors, and solar X-ray scintillation counters. Launched on an Atlas rocket with an Agent upper stage, it would basically gather a bunch of data points as it flew to the Moon before crashing pretty hard on the surface. After a month of delays owing to power outages, fuel tank valve malfunctions, and various spacecraft subsystem failures, Ranger 1 finally launched at 6:04 in the morning on August 23, 1961. Spotty telemetry told engineers that the spacecraft reached its parking orbit but the Agena failed to relaunch. Ranger 1 wouldn’t be leaving Earth orbit. On the plus side, the spacecraft worked beautifully and did return data, just not from its target body.

The Ranger Block I configuration. NASA. Ranger 2 followed in Ranger 1’s footsteps at 3:12 am on the morning of November 18. It was a twin to its predecessor, in good ways and bad. Ranger 2 made it to its parking orbit, but telemetry coming back thirty-two minutes after launch said that a faulty gyro in the Agena was stopping it from relighting. This time engineers didn’t even have the silver lining of a good spacecraft; nothing on this mission was working. Ranger 2’s orbit decayed and it fell back to Earth two days later. Nevertheless, JPL engineers pressed on with more ambitious missions. Ranger 3 was the first so-called Block II mission. The 10 foot (3.1 m) tall capsule was covered with a 25.5 inch (65 centimeter) balsawood impact-limiter and had a mono-propellant motor on board for midcourse corrections. Otherwise, it had a similar shape and size to the Block I, but its payload was different. Ranger 3 carried a gamma-ray spectrometer, a radar altimeter, and a seismometer in the capsule that would be soft-ish landed on the surface. Batteries would keep it alive for 30 days. But the most exciting payload was the vidicon television camera that could send back one complete frame every ten seconds. We were finally going to see the Moon up close. The mission launched at 3:30 pm on January 26, 1962, but a malfunction in the Atlas’ guidance system had the engines burn longer than expected. Ranger 3 was on track to pass ahead of and below the Moon. Making matters worse, the spacecraft turn away from the Earth, cutting off communications and making a midcourse correction impossible. Ranger 3 sent back a spurious signal but no useful TV images when it passed the Moon two days later. With three consecutive failures, the press was starting to publicly doubt that JPL could get to the Moon. NASA was questioning management behind the Ranger program, but there were still more planned launches, which were more chances for the program to succeed. Identical to Ranger 3, Ranger 4 launched at 3:50 on the afternoon of April 23. Like Ranger 3, this mission was designed to gather gamma-ray data then take pictures of the Moon before impacting the surface where it would take seismic measurements. The Atlas and Agena both performed well, everything looked great, but then a timer in the spacecraft's central computer and sequencer failed. The solar panels didn’t deploy and it never acquired a strong signal with Earth. The signal fluctuated and then went silent as Ranger 4 tumbled along then impacted the far side of the Moon three days later. Ranger 5 was another shot at Ranger 4’s mission: get gamma-ray data in flight, take pictures of the Moon before landing, then gather seismic from the surface. The mission launched through overcast skies on October 18, 1962, just before 1 pm. But some unknown malfunction after the translunar injection burn left the spacecraft without power. It activated its batteries, but they wore down after 8 hours and 44 minutes. Ranger 5 was DOA when it passed by the Moon before entering its heliocentric orbit.

The Ranger Block II configuration. NASA. This fifth failure was the first nail in Ranger’s coffin. The last four missions were cancelled and those that remained, Rangers 6 through 9, were simplified. These Block III incarnations of the Ranger spacecraft had no science goals. Their only purpose was to transmit high-resolution images of the Moon before impacting the surface. To the end, these missions had an all camera payload: six television vidicon cameras, 2 full-scan cameras, and 4 partial scan cameras. The cameras were divided into separate channels with separate power sources, timers, and transmitters to reduce potential failures. Ranger 6 launched towards the Sea of Tranquility at 10:49 in the morning on Thursday, January 30, 1964. The Atlas performed flawlessly and the Agena sent the spacecraft hurtling towards the moon. A mid-course correction trimmed the flight path and put Ranger 6 on a perfect course for its target. There was only one malfunction on this mission and it came from the onboard RCA TV camera. The signal had cut out early in the mission for 67 seconds then been spotty. When the cameras turned on on February 2, the signal was weak. The spacecraft didn’t manage to capture any images before crashing into the moon. After six consecutive failures, morale was at an all-time low. There was talk that JPL should be shut down, that a university-affiliated centre couldn’t handle a rigorous spaceflight program. Higher-ups at NASA were considering replacing the whole program management since the problems had to be originating somewhere. Others were certain the problems dogging Ranger were nothing short of sabotage. When a worker found a small polyethylene bag with 14 screws and a lock washer in one of the sealed electronic modules in Ranger 7’s the television subsystem it seemed to confirm fears that people were going to great lengths to have Ranger fail. It was through this cloud of doubt and anxiety that Ranger 7 launched towards the Sea of Clouds on July 28, 1964. Seeking to help his team relax a little, mission manager Harris Schurmeier handed out peanuts. It was an arbitrary choice. He figured that chewing on something or just fidgeting with them on the table would give his team something else to focus on. Everyone knew that another failure might kill Ranger and JPL. Distraction was key. With peanuts on desks and in hands, engineers watched as telemetry from the spacecraft came back. Everything was working perfectly, the mission was right on target, but given past experiences, the team figured the mission had a 50-50 chance of succeeded when they went home for the night. The next morning, mission scientists sent a command for a mid-course correction. The burn was executed perfectly. Engineers changed their odds of success to 80-20.

The first ever up close image of the Moon's surface taken by Ranger 7. NASA/JPL. By 6:05 am on Friday morning, July 31, the JPL’s visitors gallery in the Space Flight Operations Facility was packed. The gathered crowd sat behind rows of tense engineers with eyes locked on to consoles. Ranger 7’s telemetry still looked good, and it only had to stay good for another 20 minutes. The lunar impact was imminent. Data came back that the cameras had turned on and were warming up. Then JPL got a strong signal from all six on board. At 6:25 am, the hum of Ranger 7’s telemetry stopped. The spacecraft had impacted the Moon right on target, and the images started trickling in. The silence was immediately replaced by applause as visitors and engineers alike realized they had just captured the first ever close-up images of the Moon’s surface. The stunning success of Ranger 7 had nothing to do with peanuts, but it’s been a tradition for the legume to be on hand for every major mission event — launches, landings, and orbit insertion burns.

Sources: Lunar Impact: The Story of Project Ranger. Ranger 1; Ranger 2; Ranger 3; Ranger 4; Ranger 5; Ranger 6; Ranger 7. Also, an earlier version of this article appeared on Discovery News Space way back in the day, but the website doesn’t exist anymore so neither does that article. But if this sounds familiar that’s why!