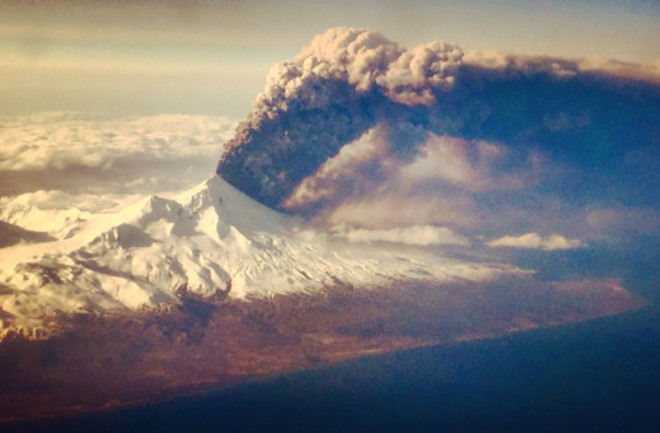 Pavlof volcano in eruption, March 27, 2016.Colt Snapp Alaska's Pavlof erupted unexpectedly yesterday afternoon, the volcano's first eruption since November 2014. Pavlof had been on the lowest alert status since January 15, 2015 after all signs of elevated unrest ceased. However, according to the report from the Alaska Volcano Observatory, at ~3:53 pm (local time), tremor at the volcano sharply increased. The eruption started about 30 minutes after the earthquakes began. Last night, an impressive lava fountain was seen on the volcano as well. The tremor at Pavlof remains high, which without direct view of the volcano, suggests the eruption is ongoing.

According to reports from pilots, the ash plume

(see above) reached 6 kilometers (20,000 feet) to possibly as high as 9 kilometers (30,000 feet). There weren't many clear views of the eruption from ground-based webcams, but a passenger in a Penair flight actually captured the ash plume

the ash heading north over Bristol Bay towards Anchorage, so flight diversions could be possible. GOES-15, the weather satellite, also captured a nice loop of the plume from Pavlof (see below).

GEOS-15 satellite IR loop showing the plume from the March 27, 2016 eruption of Pavlof in Alaska. Click on the image to see the loop. Dan Lindsey / NOAA The eruption appears to have produced some lava flows as well based on VIIRS images taken today (see below)

March 28, 2016 VIIRS images showing the lava flows and some of the plume from the eruption at Pavlof in Alaska.Dan Lindsey / NOAA The eruptions of Pavlof in 2013 and 2014 produced some impressive lava fountains and lava flows

for weeks and ash plumes as high

as yesterday's event. It is unclear where on the volcano this eruption is— the 2013 and 2014 eruptions

came from different vents, either the flank or the summit. Luckily, only around 3,000 people live within 100 kilometers (62 miles) of Pavlof, so most of the hazard lies in the air traffic over Alaska, although some of the river valleys near Pavlof will likely see some volcanic mudflows generated by those lava fountains and flows. You can check out Pavlof in the FAA webcam for Cold Bay. Visit this site and scroll down to "Cold Bay"

. Pavlof is in the NE view.